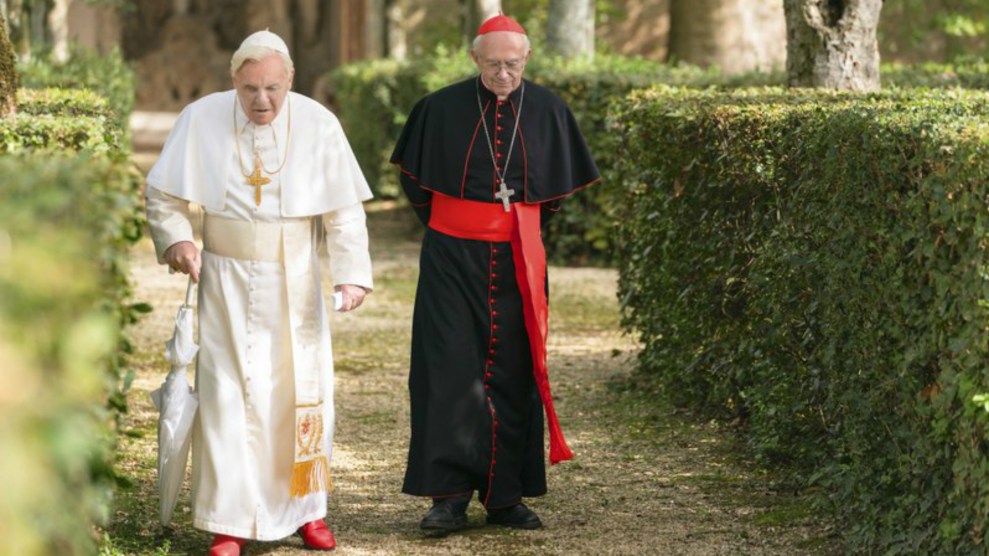 It was the fourth time I watched The Two Popes that I realized I could not stop.

I first saw director Fernando Meirelles’s fake conversation between real popes Benedict and Francis with my Roman Catholic family over the holidays. My grandfather liked it. I liked it. And I thought it would end there with some good Catholic bonding between us. Thank you to The Two Popes. Done.

Little did I know what The Two Popes would do to me. When I ran into friends, and I told them how the movie was surprisingly good, we decided we should watch it. We did.

I ran into different friends, told them how it’s surprisingly good, how we should watch it. And we did again.

Then a few nights later, I wasn’t around friends and so I said to myself: Let’s watch The Two Popes, it’s surprisingly good. And I did, a fourth time.

I have now watched The Two Popes nine times.

Still, I see the truth: It should win nothing at the Oscars on Sunday.

The Two Popes is, fundamentally, a romantic comedy. Or maybe a buddy comedy? All I know is it is comforting. It is not that interesting or thoughtful. I really don’t want to even analyze it here because it doesn’t deserve that; it just deserves our bland, thoughtless enjoyment.

I partake in each pope in The Two Popes in the same way I do my Catholicism generally—consolation when I need to not be cynical or ask too many questions. This shouldn’t be rewarded in art. It is probably even dangerous. But, after a long day, I want to be soothed by the idea that two popes (radically different in theology) and each with hypocrisies (but one way worse than the other) are—actually—pals who eat pizza together in the Vatican.

Again: Neither should win.

Both give good performances, and I would be lying if I said I wouldn’t be happy if either won. But can I be an impartial judge here? I’ve spent so much time with them that they’re like family, and, like family, I can admit that my joy for their accomplishments is entirely illogical. I am the Dad clapping for his child’s participation trophy; I want to see my popes succeed because I love my popes. But The Irishman has better acting, so does Pain and Glory—and whispering to myself here—I even liked the acting in that horrible scene from Marriage Story (at least by Adam Driver).

The lesson of my journey with The Two Popes is that, (1) I like movies where two old men talk in a room; (2) I cannot escape Catholicism (my Mom got me a book about all the popes for my birthday and I’m loving it); and (3) that you shouldn’t hate Pope Benedict.

None of those are entirely defensible positions.

Neither is the fact that before Sunday I will likely hit double-digits, completing watch number 10 of The Two Popes.