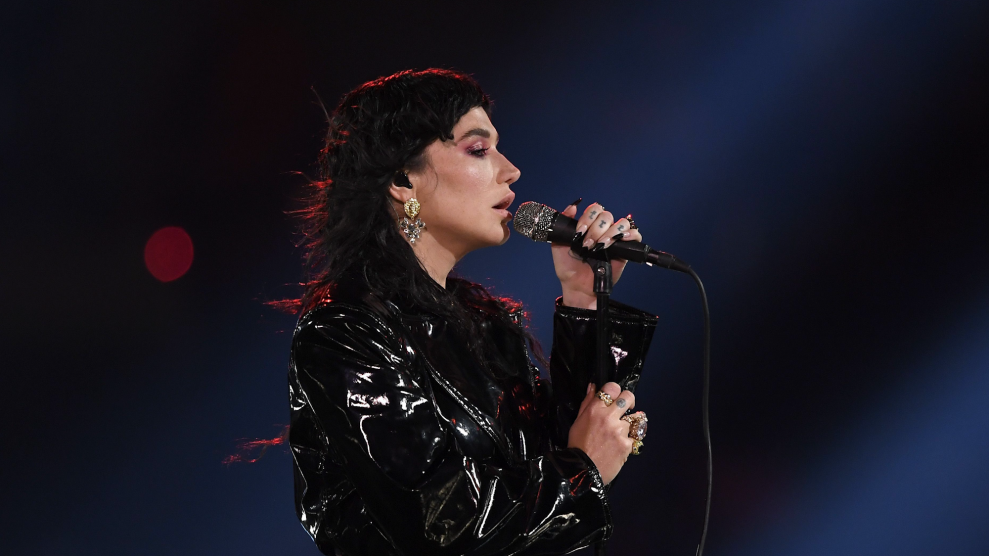 For over ten years Kesha’s unabashed shamelessness has been a constant in our lives. It started in late 2009 when the number one hit “Tik Tok” introduced Ke$ha as the pop party girl—our pop party girl. She happily confirmed her status as a next-wave popstar singing about sex (“Blah Blah Blah”), drugs (“Your Love Is My Drug”) and hitting the dance floor (“We R Who We R”).  She reckoned with her imperfections with the on-brand “Dancing With Tears In My Eyes” and “Love Into the Light.” But fundamentally she seemed to like her flaws. Her entire career was built off celebrating her own outrageousness. We danced.

Then things changed with Rainbow. The moment the first single dropped, Ke$ha became Kesha—her old persona a relic we could use to explain the early 2010’s. Rainbow wasn’t the “fuck it, let’s party away the pain” music that had become synonymous with “Ke$ha.” It was a wrestling match with a haunted past. She wiggled uncomfortably with her imperfections (“Learn To Let Go”). Gave us the Dolly Parton collaboration/cover we never knew we needed (“Old Flames”). And still remained transparent about the hurt she’d been through (“Praying”). While Rainbow wasn’t devoid of Kesha’s signature character—”Woman,” “Boogie Feet,” and “Boots” made sure of that—it marked a departure. Kesha was no longer the party-pop girl of the 2010’s, but a power-ballad savant who could rack up Grammy nominations.

On her new album High Road, the party-girl has finally come to terms with who she is and what she can do. She’s found a way to champion that old lack of regret while not losing the depth an imperfect world imposes on each of us.

Kesha’s always believed she shouldn’t apologize for being herself—and in turn, her listeners shouldn’t either. That’s been clear all along. “Tik Tok” was recklessly brazen. And Animal, Kesha’s debut album, partied the world away while never forgetting about priority number one—boys. Responsibility melted away. (Her second party-pop album, Warrior, made sure of that.) By embracing the imperfect and “Sleazy” party girl she was, we were asked to accept ourselves no matter the imperfections.

High Road brings back something much of the world seems to have forgotten: How to have fun. The fanatic “Kinky”—a cheeky collaboration with Ke$ha—is the sexual anthem for the new decade, reflecting how queer mainstream music has become. It’s an excellent example of the convergence of Kesha’s spliced career. “[I] really want to reclaim all sides of my voice on this album,” she wrote in a Reddit AMA.  “And embrace where I’m at everything I’ve gone through, and that includes Ke$ha.” On “My Own Dance” she explicitly states the transition: “’You’re the party girl, you’re the tragedy / but the funny thing’s I’m fucking everything.”

“Tonight,” the album opener, has been hailed as “Sleazy” part two, and for rightful reasons. Opening with Rainbow-era vocals the track quickly takes a turn as a pop drop ascends into an explosive track the exudes the adrenaline of a night well spent—Kesha’s specialty. Unnamed energy merges into wildly specific lyrics. “Birthday Suit” is the Nintendocore song that’s been missing since Charli XCX dropped pop masterpiece “Boys.” And while the highs of the album are certainly high, it’s Kesha’s heartbreak that was first exhibited in tracks like “Last Goodbye” and “The Harold Song” that have come to fruition in the emotional lows of High Road. “Did I miss my one true love? Was he right in front of me at the dive bar?” she laments while reminiscing over a missed lover in “Cowboy Blues.” “Father Daughter Dance” dares Kesha to ask questions about her fatherless childhood—”How do I miss something I never had?” But it’s her heart-aching “Resentment,” a collaboration with Brian Wilson, Sturgill Simpson, and best friend Wrabel, that anchors the album with maturity.

Kesha’s music has always had an air of messiness to it. Maybe it’s the jarring and buzzy production behind Warrior’s “Supernatural” or the carnival horns behind High Road’s “The Potato Song (Cuz I Want To).” Maybe it’s the singing about coming in “Sleazy,” inviting someone to climb into her “Gold Trans Am,” or tripping in the desert with her best friends in “Shadow.” But it’s a human messiness, an honesty Kesha’s never run away from, or apologized for, album after album.

Kesha helped define a decade of party-pop music, giving way to acts like Tove Lo, The Chainsmokers, Charli XCX, and Miley Cyrus—all who’ve made careers on guilt-free, party-on anthems. She then personified the innovation from guilt-free party hymns to unapologetic reckoning. With High Road, Kesha dares us to accept that the two aren’t mutually exclusive.