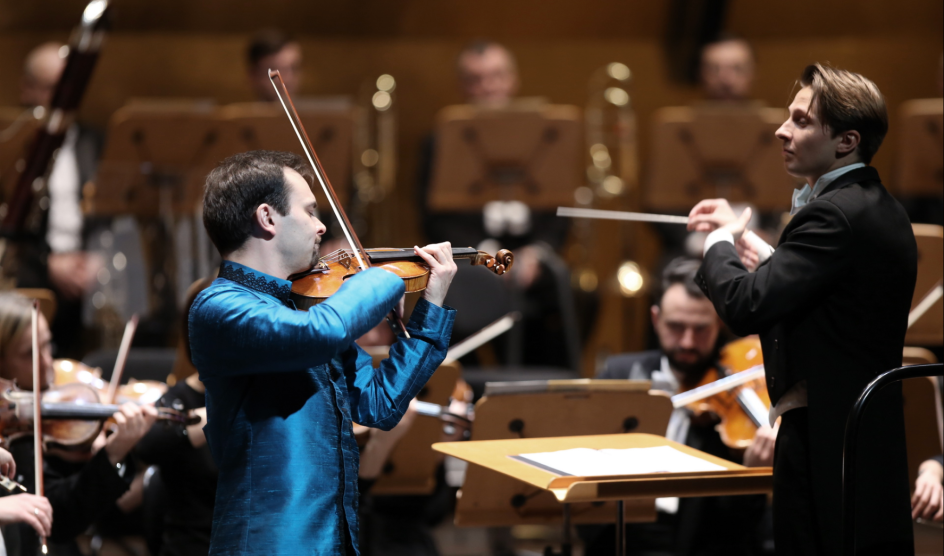 Violinist Janusz Wawrowski brings to life a lost World War II–era concerto whose music sheets had been buried by its composer before fleeing the Nazis.Cezary Aszkiełowicz/Szczecin Philharmonic Symphony Orchestra

When the Nazis were advancing toward his home, composer Ludomir Różycki stuffed the pages of his violin concerto in a suitcase and buried it in his yard in Warsaw, Poland, before fleeing. His home was destroyed near the end of World War II, and he died in 1953 without knowing the fate of his concerto.

But his composition was unearthed by builders after the war. Poland’s top classical violinist discovered it in the archives of the national library, and after years of work, the upbeat piece—reminiscent of Gershwin in places—was performed recently to great acclaim in the northwest Polish city of Szczecin, the Guardian reported.

Violinist Janusz Wawrowski, who brought it to life onstage, tried to channel the hopeful exuberance of the work and of the once-prominent Różycki. “To me it’s full of the energy and life of Warsaw before the war,” Wawrowski said, “and I think he was trying to conjure and convey this positive energy as he wrote it in 1944 in a very dark time, as the artillery of the Nazis rained down on the city.”

Różycki’s relatives were stunned upon hearing the concerto. “It’s like getting to know my great-grandfather for the first time,” said Ewa Wyszogrodzka, an economist. “To think, these pieces might have been lost forever.”

One bright spot. The wildfires devastating swaths of Australia were bearing down on the zoo with the country’s largest collection of primates. So the staff took the monkeys and pandas home. The Mogo Wildlife Park saved each one—about 200 of them. “Right now, in my house,” zoo director Chad Staples said last week, “there’s animals of all descriptions in all the different rooms so that they’re safe and protected.” (Washington Post)

Positions of power. Princeton University has displayed 10 oil paintings of not-so-famous members of its community: dining hall staff, security guards, grounds workers, and cleaning crew. Painter Mario Moore said he wants to pay tribute to unsung heroes of the campus community and “put them in positions” of greater power, starting with African American workers as painting subjects. Princeton has purchased some of the 8-foot-high portraits for its permanent collection, and Moore is teaching a drawing class this semester. Both endeavors are helping to “heal some of the lasting wounds of racial division that have long marred this institution’s history,” said Tracy K. Smith, chair of Princeton’s Lewis Center for the Arts. (CNN)

Late bloomer. Rose Valdez loves the sunshine. Each year, often sitting in the sun, the 94-year-old in Pueblo, Colorado, crochets wool caps. Since taking up the craft at 90, Valdez has supplied hundreds of the cozy hats for people in need. “I don’t do nothing else, so I might as well do something for somebody,” Valdez says. She is a blessing, says the Pueblo Cooperative Care Center, which distributes the caps. (My Modern Met)

Recharge salutes other late-blooming artists such as Amy Sherald, Stan Lee, Paul Cézanne, and Yayoi Kusama. Sherald, best known for her portrait of Michelle Obama, didn’t get that break until she was 43, Artnet News reported. Lee’s own star turn came at 43, when he began drawing The Fantastic Four. Cézanne didn’t get a solo show until he was 56. Kusama, whose Instagram-friendly installations are now wildly popular, was 60. Fortitude as well as ability is key, said critic Jerry Saltz. He should know. Saltz, 68, a self-described “failed” artist and a long-haul trucker into his 40s, won the Pulitzer Prize for Criticism in 2018.

I’ll leave you with this image from the Pacific Crest Trail in California, courtesy of the Bureau of Land Management’s Twitter feed. Thanks for reading, and happy trails.

As the holiday season comes to a close, a #NewYear and #NewDecade await us. We hope you get a chance to #GetOutdoors and experience #YourPublicLands once more.