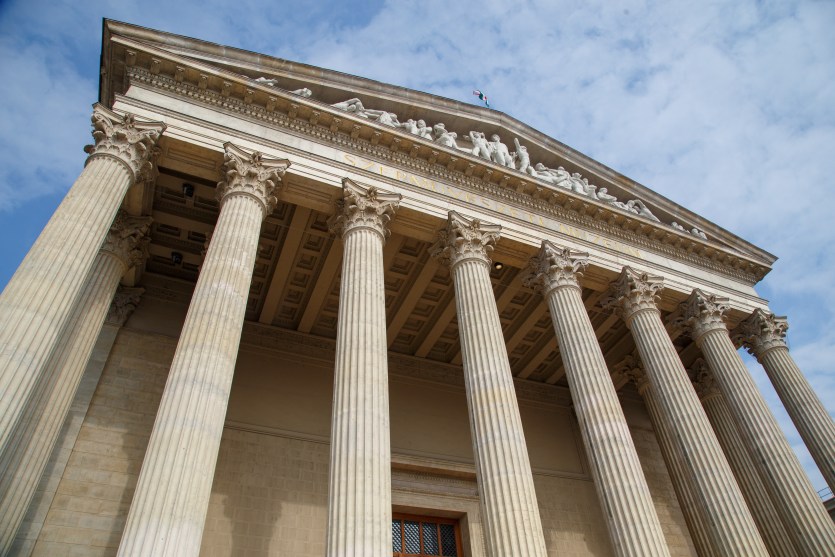 What does the right to vote entail exactly? What is the separation of powers guaranteed in the Constitution?

At a time of impeachment, escalating climate change, and justified fears of foreign interference and widespread voter suppression in the presidential election, these are the crucial questions that a group of Rhode Island students say they haven’t been taught to answer in school. So they’ve gone to court to ensure they’re educated, the Christian Science Monitor reported. The students’ lawsuit argues that Rhode Island violates their constitutional rights by not teaching them the skills or providing knowledge to vote or serve on juries.

“I didn’t learn my voting rights through school,” says Aleita Cook, a Providence public school graduate and a plaintiff. Nor, Cook says, did she learn about how the three branches of government are checks and balances on power, a key constitutional feature designed to prevent a dictatorial power grab.

A place to help. At 12:30 p.m. on Tuesdays, here they come, led by two 100-pound-plus Bernese mountain dogs. The pack is headed to Dog Time at Washington, DC’s N Street Village. The dogs do not judge, are not particular about social status or wealth, and do not know which of the women at this center are or aren’t homeless. Dog owners (and neighbors) Sid Stolz and David Hatfield watch as their pets are loved and give love. Stroking one of the big dogs, one woman says, “They’re huge. And you think they’re scary. They’re not.” (Washington Post)

She helped. A quick-thinking high school student opened the doors of her mosque to shelter more than 100 students during a fatal school stabbing and shooting earlier this month in Oshkosh, Wisconsin. “I just felt like I did what had to be done,” 17-year-old Duaa Ahmad told ABC News. She punched the key code to the Ahmadiyya Muslim Community’s Oshkosh chapter mosque and held the door open for fleeing, panicked students from her Oshkosh West High School, across the street. Ahmad, a senior, told CNN that her AP English literature class heard a gunshot, and the teacher told them to run. Ahmad led students across the street until the situation was under control. (Daily Kos)

Duck seeking duck. Yellow Duck hadn’t felt the same since a predator snatched her mate from a farm, so her owner wrote a singles ad and posted it on the community bulletin board of a coop in Blue Hill, Maine. “Serious replies only,” wrote Chris Morris, a 31-year-old teacher. One thing led to another, and now Yellow Duck has her pick of several male ducks at Sadie Greene’s nearby organic farm. “Ducks are one of the few species that mate for life, so when they lose their partners, they tend to mourn,” Greene said, “but they can replace their partners pretty quickly, so it will be interesting to see what happens.” (Bangor Daily News)

Recharge salutes: The Blue Lake Rancheria Tribe in Northern California, whose big solar grid provided power for 13,000 neighbors who were evacuated, their power cut, after wildfires; 14-year-old Hannah Rountree of Roseburg, Oregon, who found her cat, Spunky, while volunteering at an animal shelter; Antonio “Tony” Covay of Washington, DC, who never saw a Black Santa while growing up—so he decided to become one.

I’ll leave you with this icy (but sunny) image from Wisconsin’s Apostle Islands National Lakeshore, shared by the Interior Department’s Twitter feed on the first day of winter. Brrrr! Have a great week ahead, and see you next week, in 2020!