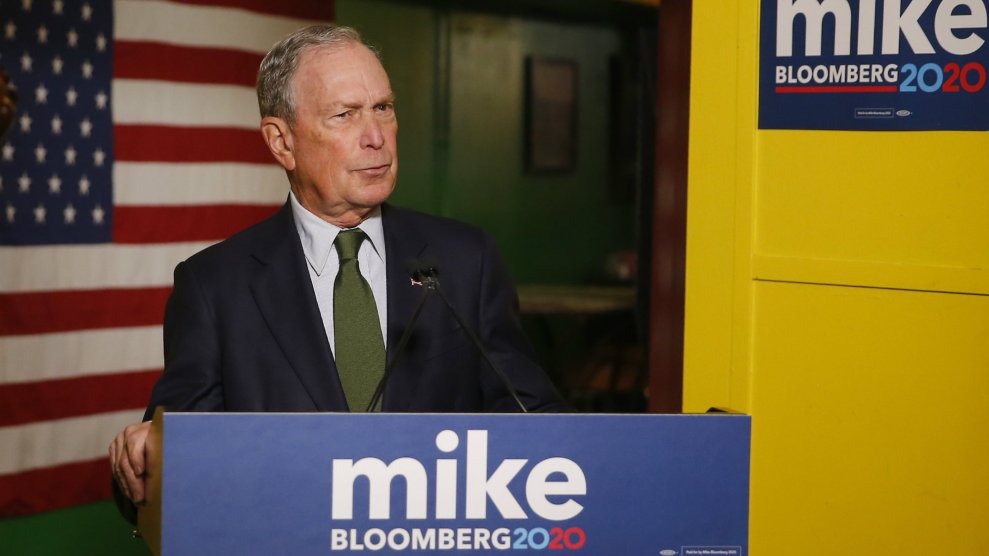 Journalism has had a rough year full of layoffs across the country, and Bloomberg Media, the company owned by the latest entrant in the 2020 Democratic primary, just made life worse for a handful of reporters.

Earlier this week, Bloomberg Media announced its first acquisition in more than a decade, buying CityLab, an offshoot website of the Atlantic that reports on a variety of areas—development, housing, transit, the environment—from an urban policy perspective. And as part of that purchase, it appears half of the website’s editorial staff could lose their jobs. According to several CityLab staffers who spoke to Mother Jones on the condition of anonymity, they have been told by Atlantic management that after the sale is completed at the end of this month only seven people will make the transition—not enough jobs for CityLab’s 16 employees: 13 full-time staff and three contractors. The staffers were informed that they each would have to interview with Bloomberg Media management this week to keep their jobs.

Michael Bloomberg’s presidential campaign redirected requests to the company, and Bloomberg Media declined to comment. The Atlantic did not respond to an email from Mother Jones.

In today’s grim media landscape, the announcement of a publication’s sale is usually packaged with news of layoffs, but the initial reports of Bloomberg Media’s acquisition of CityLab didn’t mention any and hinted at a bright future. Adweek, which first reported on the sale, said that CityLab would “continue to operate as a standalone website and brand” under the new ownership, and Michael Finnegan, Atlantic Media’s president, said in a statement that Bloomberg Media would be an “ambitious new owner” for the site, committed to carrying out its mission.

“The reality is most of us are being laid off.”

But none of the details of the Bloomberg Media’s acquisition of CityLab mentioned the future of the staff. When CityLab’s employees were briefed by Atlantic management on the sale on Tuesday, they were told that, as part of the acquisition, Bloomberg Media would only be bringing seven people from their staff on board. (CityLab’s masthead lists 15 people, but at least three of those people, and one not listed on the masthead, are full-time contractors, according to a CityLab staffer.) In that same meeting, a CityLab staffer says they were also given severance information by Atlantic management in the event that they are not hired by Bloomberg Media or do “not want to go forward with that [interview] process.” As part of the transition, Bloomberg Media executives have been conducting crash interviews this week with the current CityLab staff who wish to be considered for one of the seven positions.

“Over the last few days, most of the staff has received comments [from friends and on Twitter] saying ‘Congratulations!’ and asking if we’re moving to New York or what our new job title will be,” says one of the CityLab staffers Mother Jones spoke to. “But the reality is most of us are being laid off.”

As his nascent presidential candidacy revs up, Michael Bloomberg has held onto his 88 percent ownership stake in the company he founded, Bloomberg LP, though he has stepped down as its CEO. That has created complications for the company’s news division. In a newsroom memo sent out last month, Bloomberg News Editor-in-Chief John Micklethwait said that because of the conflict-of-interest, the news organization won’t do any in-depth investigative reporting of Bloomberg or the other Democratic presidential candidates. The policy is consistent with comments Bloomberg made last year about the possibility of a presidential run and the potential conflicts of interest that might hold for his business holdings. “I don’t want the reporters I’m paying to write a bad story about me,” he said on Radio Iowa. “I don’t want them to be independent.”

Last week, in response to the Bloomberg News memo that leaked, Bloomberg doubled down on the sentiment, telling CBS This Morning’s Gayle King that Bloomberg News employees would have to just deal with it. “They get a paycheck. But with your paycheck comes some restrictions and responsibilities,” he said. Bloomberg News’ new editorial policy on covering 2020 Democratic presidential candidates, as well as Bloomberg’s comment to King, has irked enough outlets who use Bloomberg News as a wire service that they’re reconsidering using its stories. In addition, Donald Trump’s reelection campaign said it won’t give Bloomberg News reporters credentials to cover campaign events because of its new policy, claiming that it exposes an open bias against the president. Meanwhile, several Bloomberg News editorial staff have taken leaves of absence to work for Bloomberg’s presidential campaign.

It’s unclear if CityLab under Bloomberg Media ownership would be immune from the Bloomberg News directive. Justin B. Smith, the CEO of Bloomberg Media, told Adweek that the decision to purchase CityLab had “no relation whatsoever” to the Bloomberg News directive to not investigate Bloomberg or any other Democratic candidate. In the near-decade of CityLab’s existence, it has done plenty of reporting—both positive and negative—about Bloomberg’s tenure and legacy as New York City’s mayor. Since announcing his presidential campaign, Bloomberg hasn’t said anything about distancing himself from his company, but in that Radio Iowa interview last year, he said he would completely divest himself from his media empire if he ran for president, either placing it all into a blind trust or selling it, if possible. So far, neither has happened, and Bloomberg has not mentioned either possibility since announcing his candidacy.

Some CityLab staffers say they have concerns about the Michael Bloomberg-Bloomberg News situation. “This would affect CityLab writers specifically in different ways,” says one staffer, explaining that some of CityLab’s staff writes about the specific plans that presidential candidates put forward as it relates to their areas of coverage, like housing, infrastructure, and other city-specific issues.

It makes sense that Bloomberg Media would want to purchase CityLab. For years, the Atlantic partnered with Bloomberg Philanthropies to host an annual CityLab conference. But the site started to show signs of struggle earlier this year when the Atlantic laid off CityLab’s dedicated business staff. “The writing’s been on the wall for a long time,” one of the staffers said about CityLab’s future with the Atlantic. Another staffer said that during the meeting Atlantic management had announcing its sale to Bloomberg Media, the management made it clear “that the company is really focusing on the Atlantic and that they just feel that they can’t focus and invest in CityLab to make it robust.” (CityLab partners with Mother Jones and other news outlets through the Climate Desk collaboration.)

For CityLab’s staff, there’s a lot of uncertainty and anxiety about their future with Bloomberg Media. “We’re really proud of the work we do, and we really want to be able to keep doing it,” one staffer said. “I feel like whatever my outcome is I do feel some relief knowing that there is a next phase of CityLab coming up. And I’d say at this point I feel cautious optimism about it.”