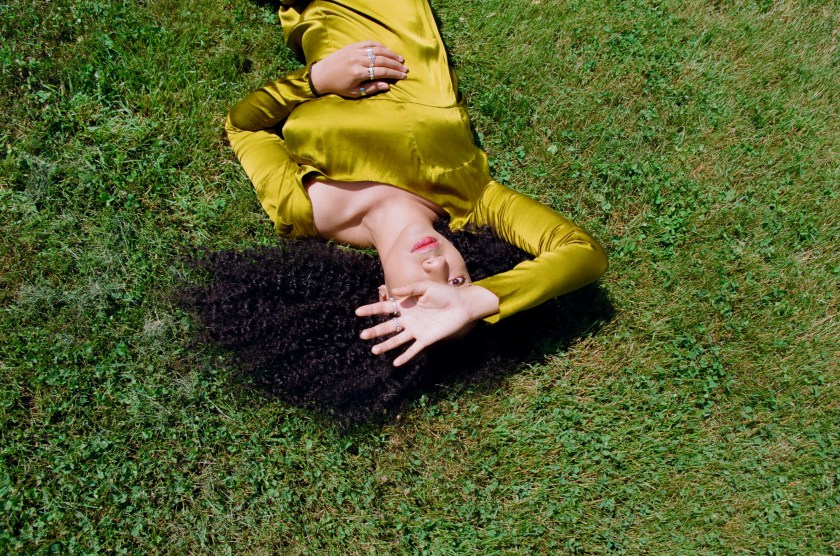 Nakaya insists she isn’t a sad person. “I have my dark days,” says the LA-born and Brooklyn-based singer-songwriter, “but I’m a very social, outgoing person.”

Her music is another matter. Sadness suffuses her songs. Like anything from Sufjan Stevens, Mitski, or Phoebe Bridgers (to name a few), Nakaya’s songs engulf you in a moment of anguish, refusing to let you go until the track meets its end. In tracks like “Something More” and her latest, “Wither,” she treats the loss and loneliness that come in the aftermath of a relationship as a sort of death, rather than as passing mood.

“I write a lot of songs about loss, because it feels really distinct,” she says with a smile on her face. “It’s very visceral, and to take that physical experience and turn it into something that’s auditory is what makes music so special.” Music, she says, is “a beautiful way to explain an experience.”

I first heard Nakaya by chance, as a featured singer on Glassio’s “Daydream.” There was an eeriness to her voice that diverged from the usual electro-pop femme vocal feature. (You know the kind—anything Chainsmokers.) Nakaya’s voice stood out from the background without overwhelming it. In 2017, Nakaya had only a few tracks out, but in each she sounded like an artist who’d been around for years. Without the upbeat production of Glassio’s synth pop, Nakaya’s voice was left to its own splendid devices, delivering lyrics with a creepy accuracy of emotion.

Nakaya relies on a multitude of musical influences, which she traces back to her time growing up in LA with her Panamanian hip-hop–producer father. “He was a sample-based producer. Not only was he listening to other hip-hop music, but, like, random shit. Sometimes we would listen to Bulgarian women’s choir or Icelandic folk music, or just really oddball things,” she says. “I really do think because of my upbringing, my work is a very clear amalgamation of, like, a whole mess of things that in the end very much feel like me, but are a little less easy to define.”

Nakaya left LA for school in NYC, where she studied how to turn her experiences into an auditory experience. “I’m just a really emotional person who has all of these feelings all the time, and music is just an amazing way for me to get it out,” she says, voice rising. She recalls writing a song called “Dear Skin” when she was 18. “It was really personal,” she says. “I cried in class when they forced me to play it for critique. It was way too personal for me. I just felt like I was seen in this uncomfortable way. But being seen in that way now makes me feel very powerful. It takes away the shame of the things that I feel sometimes.”

Her latest, “Wither,” is likewise a work of personal reckoning. “I went through a really nasty breakup last year that wrecked me for a long time, and I didn’t think that I was going to be able to come back from that,” she explains. “I wrote ‘Wither’ about my ex and that literal feeling of knowing you just have to let it go. I have acceptance that this is not a thing in my life that serves me anymore.

“I am just so close to the people in my life. The loss of a relationship really feels like the end of a track, in a certain regard, in my life. Everyone has fucked something up and lost someone important in their lives. And that is a theme that feels very potent in stages of my life.”

Throughout our conversation Nakaya’s eyes never break from mine. She is serious about sadness, about the strength that can come from submitting to your emotions.

“There is something so freeing about being able to sit with the thoughts that feel really scary and let them happen and understand that they’re going to move and that they’re not always going to be there,” she says. “You can relinquish some of the power that it has over you.”