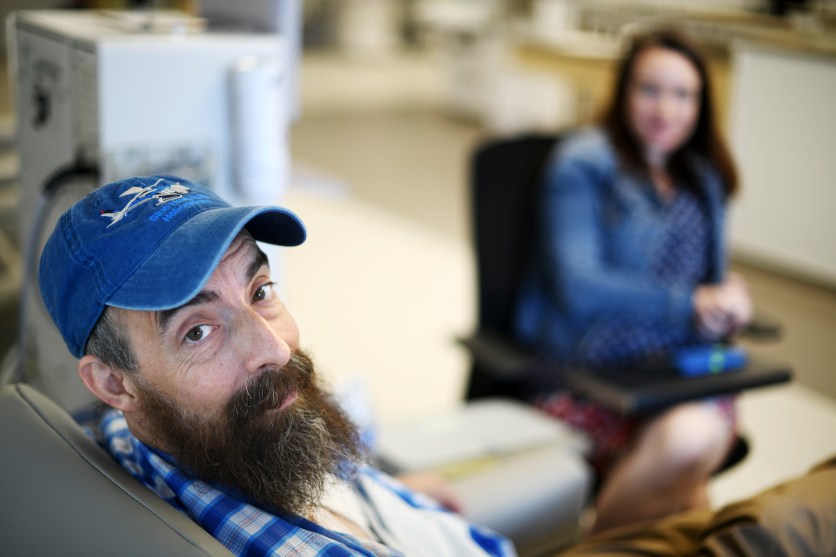 Sovereign Valentine, a personal trainer in Montana, underwent dialysis and got stuck with an incorrect bill for hundreds of thousands of dollars.Tommy Martino/Kaiser Health News

The dialysis kept him alive. Then the Montana physical trainer, Sovereign Valentine, got the bill after insurance—for $524,000.

Now that bill is zero, wiped clean after journalists investigated and shared the story.

Valentine was diagnosed with kidney failure in January and was told he needed 14 weeks of dialysis. The clinic to which he was sent, 70 miles from his home, charged him $13,868 per session—59 times the Medicare price. His insurance company claimed Valentine was out of his coverage network, which he disputed.

Last Thursday, after a probe by NPR, Kaiser Health News, and CBS This Morning, dialysis provider Fresenius—one of the country’s two biggest dialysis outfits—agreed to treat Valentine as an in-network patient. That means he’s on the hook for just a $5,000 deductible, which he has already hit for the year.

Valentine said he hopes his outcome sheds light on the gross inaccuracies of medical billing—such as in-network and out-of-network determinations—and inspire all patients to demand clarity and stand their ground.

The victory means Valentine can focus on his next step: a kidney transplant. Now, he told Kaiser Health News, “I can just save my energy for that.”

Harvesting seaweed. England’s first commercial seaweed farm is opening, using the once-discarded plant for food, cosmetics, and biotechnology. Seaweed is increasingly used as an experimental, climate-friendly substitute for plastics, making headlines this year when London Marathon runners were given water-filled seaweed pouches instead of plastic bottles. “We don’t need land, we don’t need power, we don’t need freshwater, and we don’t need chemicals,” said Wave Crookes of SeaGrown farms. “All we need is sun and the sea.” (Positive News)

The optimists’ club. At age 104, Virginia Leitner has begun a new project, one that emphasizes lessons she’s learned. The former teen tailor, self-taught painter, and Ms. Missouri Senior America pageant contestant is organizing an optimists’ club in her building, where people can focus on the brightness of life. Leitner says that’s been one secret to her longevity, along with good genes and exercise. “Just don’t tell me to be good,” she adds, “because I want to dance and have fun.” (STAT News)

People power. After widespread protests, the Trump administration has halted plans—for now—to imprison migrant kids at an Army base in Oklahoma where Japanese Americans were held during World War II. Japanese Americans and Native Americans (some of whose ancestors were imprisoned at Fort Sill in the 1890s) were among those who had protested outside the base. The Department of Health and Human Services said Saturday it was placing many migrant kids with sponsor families and wouldn’t use the base at this time. (Associated Press)

Another side of the story. Baltimore, in the news lately, is also a leader in urban forestry. While many US cities are losing their trees rapidly, Baltimore has joined cities like Barcelona and Melbourne in prioritizing the expansion of canopy coverage. Studies show crime and temperatures decrease with more shade—and home values increase. Trees also help with air pollution removal, carbon sequestration, even work productivity, said David Nowak, a senior scientist with the US Forest Service. “We might as well work with the forests. Nature is giving us this amazing resource…We should be smart about this whole process and use nature to make our lives better.” With 2.6 million trees, Baltimore is up slightly in its canopy coverage and is aiming to do more. “We’re at the forefront of a lot of green infrastructure,” said city arborist Erik Dihle. “We have a lot to champion.” (Christian Science Monitor)

Readers, is your community expanding its tree canopy coverage? Let me know at recharge@motherjones.com.

Sesame love. Thanks to all the readers who keep sending messages about how our article on Sesame Street reminded them of the way the show affected their lives. Andrew Thorton of San Antonio wrote over the weekend: “Sesame Street, with its wealth of diversity and inclusion, was elemental in shaping my view of the world, and the world I wanted to live in. I am eternally grateful to the creators of that show, and I feel so fortunate to have been raised on it. My parents had no idea!” Reader Kate Amon of Fremont, California, added: “Not only did I love watching Sesame Street in my youth…I’m STILL waiting for life to be Sesame Street for childhood and Star Trek for adulthood! Getting impatient about it as I’m in my fifties now and our country is backsliding. Here’s to hell-raising to make America a less hellish place.”

I’ll leave you with this blooming image from Glacier National Park in Montana, via John Weatherby and the Interior Department’s Twitter account. Have a great week ahead!

Just in case you need more proof that @GlacierNPS is one of the most gorgeous places on Earth. Pic courtesy of John Weatherby #FindYourPark #Montana pic.twitter.com/judUpXxNQ6

Clarification: Valentine’s insurance company had claimed he was out of his coverage network, which he disputed.