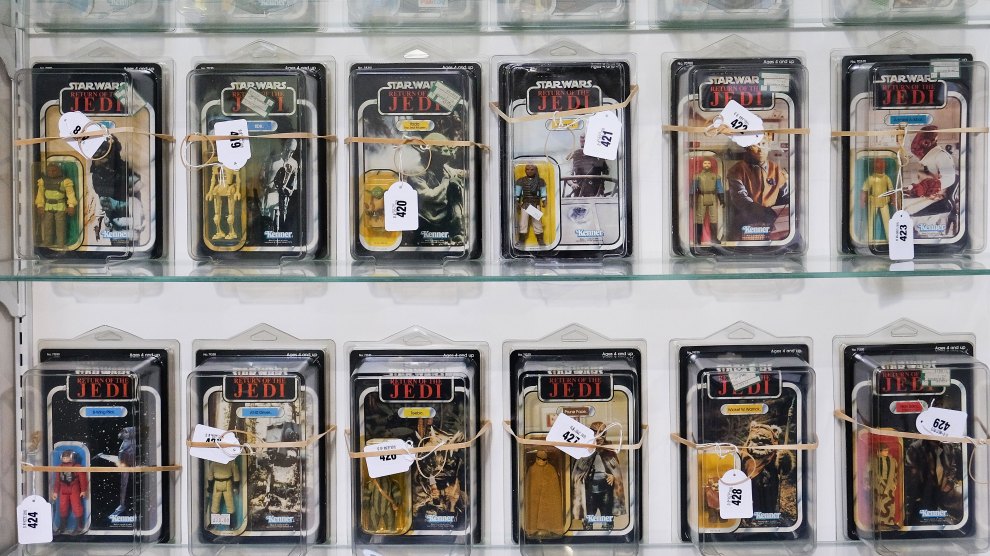 In 2005, George Lucas was about to release Star Wars: Episode III — Revenge of the Sith, which is technically the sixth film in the series, and according to 60 Minutes—with whom Lucas sat down for a broad retrospective—”The Last Star Wars.” He was ready to move on.

“There is no episode seven,” Lucas says confidently. Instead, he pines for failure making tiny art films. “I don’t think everything should be these big, blown-out super kind of movie that I stumbled into,” Lucas says. “I’ve sort of followed it to the end.”

In fact, it was barely the beginning of the “big, blown-out super kind of movie.” It wasn’t even the end for the Star Wars franchise—which has continued to make millions 42 years after its debut in theatres.

In 2008, Marvel Studios released Iron Man, kicking off the Marvel cinematic universe. Films, studios had realized, could be connected in a vast web of money-making spinoffs, sequels (and sequels to sequels), TV shows, merchandise, theme parks, novels, comic books, and really anything that can bear a likeness or a logo. A perfectly fine, middling comedy—ahem, Ant-Man and the Wasp—now was a superhero movie too; you’ve got to see it to follow along! Entertainment morphed into an obsessive hobby, and people spend a lot of money on hobbies.

Marvel’s universe-building strategy crystalized what the money was already saying: A movie was valuable because it established a brand. Adapting comic book storytelling to the big screen offered a natural way to cash that check. One that Star Wars foresaw but originally failed to fully seize.

Other movie franchises felt the monetary effects of zealous fandom. The Harry Potter films made $7.7 billion at the box office and an estimated $15 billion from merchandising; Hasbro became a $14 billion behemoth because of Transformers; in 1996, Mattell lost $300 million because of a Buzz Lightyear toy “famine” just before Christmas—more than Toy Story grossed at the box office.

We now live in a world of universes. Of the top ten grossing movies from 2018, only one wasn’t an expansion of an already created brand, assuming that The Grinch isn’t a building block in an upcoming Dr. Seuss cinematic tower of content. There’s also intellectual property like Angry Birds, a game that was transformed into a movie in hopes it would be a universe—only to find the solar systems of some cultural touchstones aren’t able to support content life. Even a prestige TV show like Big Little Lies needs to feed the beast.

But first, there was Star Wars.

“The deeper you go, there’ll be more things to reward you,” said Marvel Studios’ Kevin Feige, the mastermind behind this capitalism-forward way of storytelling. “And I learned that directly from Star Wars.” Feige says he read Star Wars novels as a kid.

The series inspired ravenous fandom from the beginning. The Washington Post described a neighborhood wrecked in 1977 because it was the only one with a theatre playing Star Wars: “It’s … it’s an invasion,” said one resident, as if Godzilla was stomping around her borough. Toys created by Kenner for the film flew off the shelves. By the end of 1978, the company sold more 40 million action figures, generating more than $100 million in sales. But the true turning point was 1980, the year The Empire Strikes Back was released, when merchandising began to outpace ticket sales. By 2012, the Hollywood Reporter estimated that Lucas had built a $20 billion toy empire; his films made a little above $3 billion in tickets sales. And, decades later, kids are still buying a ton of Star Wars branded materials. “All the money’s in the action figures,” Lucas famously said.

Lucas often hedges this massive enterprise as all in service of the movies. He told Rolling Stone in the 1970s he was going to use profits to build what became the Skywalker Ranch in Northern California, to get away from the Hollywood muck, an idyllic place to make those experimental art films. We’ve never seen evidence of such projects; instead, the Skywalker Ranch is a big business production studio, one campus of four owned by Lucasfilms that employs more than 2,000 employees who are famous for their computer-generated imagery. (Michael Bay was inspired to create his films after a summer job there.)

Despite the finality in Lucas’ words in 2005,  there was an episode seven. After Disney acquired Lucasfilm for $4 billion in 2012, the companies needed to churn out content. Now, J.J. Abrams is finishing up the last film in the new trilogy, to be released in late 2019; there are at least two Star Wars shows set to premiere on Disney’s new streaming service; the Game of Thrones creators are going to create yet another trilogy of movies, the first set for a 2022 release; and Rian Johnson is also creating a spinoff trilogy. All of these will be accompanied by comic book and novel tie-ins, of course, and plenty of merchandise. Truly, the cherry on top here is a new theme park, Galaxy’s Edge, to open its doors on May 31 and sell $200 lightsabers and $100 droids to the cash-positive fandom. “And if the people at the Walt Disney Company…have anything to say about it,” wrote Adam Rogers in Wired when Disney unveiled the full post-merger plans, “the past four decades of Star Wars were merely prologue.” Rogers dubbed it “the forever franchise.” In many ways, Star Wars was catching up to its own lessons.

In 2015, George Lucas sat down for another sprawling retrospective interview, this time with Charlie Rose. Rose tells him that Steven Spielberg said that Star Wars’ release changed everything in the movie business. He asks if he’s proud. “Well it changed for the good and the bad,” Lucas responds. “The studios realized they could make a lot of money: ‘This is a license to kill.’ And they did it…That’s the downside of Star Wars.”

Lucas seems to feel this personally. While A.O. Scott has described the birth of universe filmmaking as akin to a “workplace sitcom”—a never-ending story with our friends—Lucas sounds trapped. “It was a while before I realized that I’m never going to get out,” he said to Rose. “I’m always going to be George ‘Star Wars’ Lucas. No matter how hard I try to be something else.”

In some ways, we as viewers are in the same Sisyphean position.

The totality of these spaces stretches far beyond films. If you buy cereal or purchase suit or go to Burger King: there is a Star Wars version of that. They’re called universes and not worlds for a reason. Like Luke, we can escape one planet—for Skywalker, to recuperate and train with Yoda; for us, by avoiding Rogue One—but we can never jettison the totality of Star Wars. We’re destined to fulfill its cosmic laws, like how all heroes replay the same story—or see the same movie—over and over.

“Yes,” Lucas confirmed after a bit of prodding in that 60 Minutes interview, “it ends in hell.”