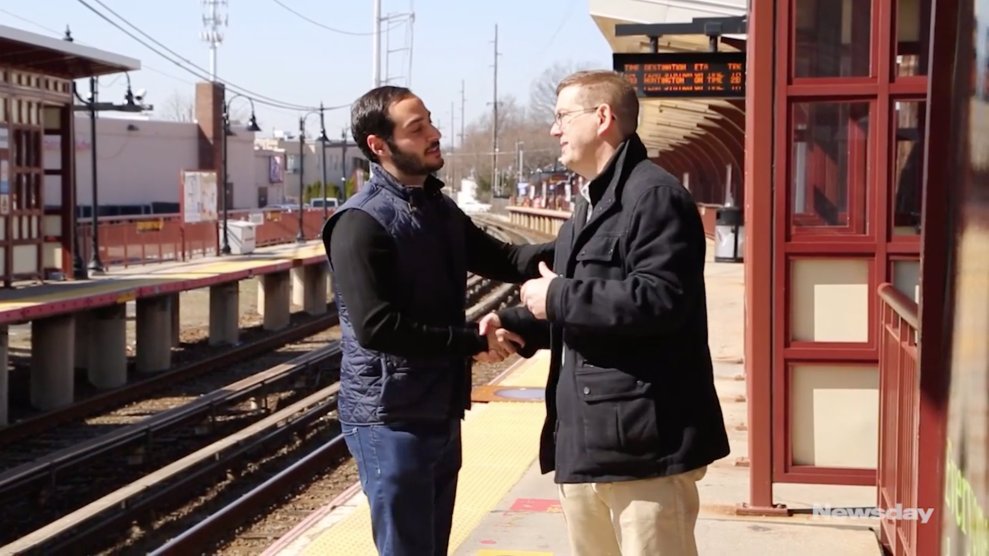 Avi Hatami was on a commuter train outside New York, studying for a medical exam, when he heard something. Hatami, an aspiring doctor just 10 months out of medical school in Mexico, took his earbuds out, recognized a call for medical assistance, and rushed to help.

In the adjacent car, Hatami found a man with no pulse—cold, sweating, bluish. He ripped off the man’s shirt and coat and performed CPR for 15 minutes.

“I was very nervous. First patient in the States. I don’t have a license yet. I’m 23 years old. I think I was one of the youngest people on the train,” Hatami tells Newsday. “I was yelling, ‘Stay with me, stay with me, come on, come on, stay with me,’ and just kept on going.”

Eventually, the color began returning to Brad Wieboldt’s face. After the train stopped, EMTs were able to board and take care of Wieboldt, who had suffered a heart attack. Still, the 51-year-old had to be placed in a medically induced coma for five days before he woke up.

Last Wednesday, 16 days after the drama, Wieboldt met Hatami and hugged him. “Without Avi,” said Wieboldt, “there is just no question I wouldn’t be here.”

That is just one inspiring recent medical story. In New Orleans, a cardiac nurse was out dancing when a fellow two-stepper collapsed. Laura Pizzano performed mouth-to-mouth resuscitation, pumped his chest, and then applied an emergency defibrillator as the dancers formed a prayer circle around them, the Times-Picayune reported. EMTs took the stricken man, who survived, to the hospital.

In a rescue of another kind, Liz Smith, a director of nursing at a Boston hospital, adopted a baby girl who had not been visited for five months, according to the Washington Post. “Since the moment I met her, there was something behind her striking blue eyes capturing my attention,” said Smith. “I felt that I needed to love this child and keep her safe.”

And in other Recharge news..