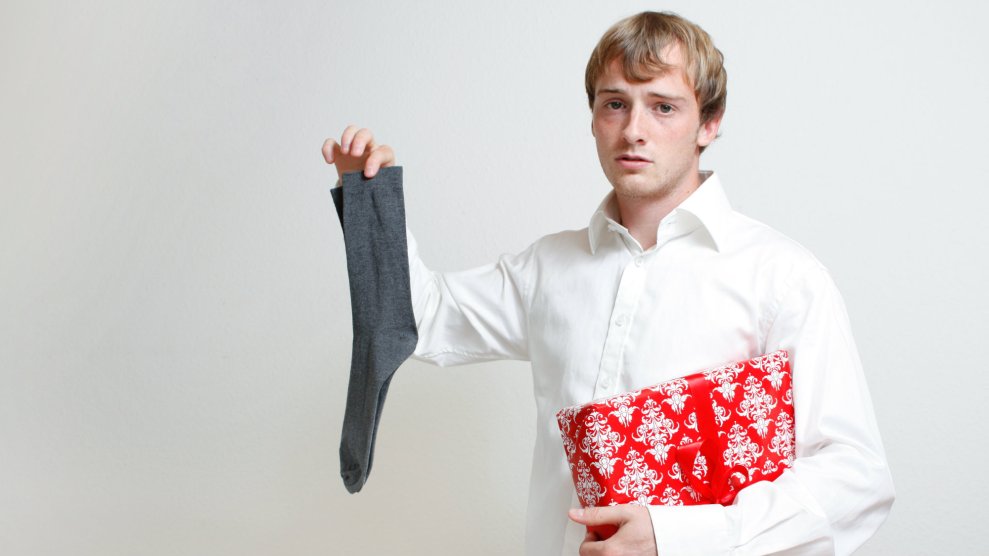 This holiday season, we asked you about some of the worst gifts you’ve ever received. And wow, did you respond. We heard from readers—many of whom, understandably, wanted to remain anonymous—about getting old hairbrushes (with hair still in them!), being re-gifted something they had given, and opening hand-me-down presents clearly intended for someone else. At least two readers mentioned receiving wrapping paper. Ouch.

Sometimes, the gifts are so consistently bad that they’ve become traditions. From one reader, whom I’ll call Andrew: “My parents are the world’s worst gift-givers. The terrible-ness of their gifts is epic and they give them throughout the family. All of us now expect terrible gifts and secretly celebrate when our gift is the most terrible,” he wrote in an email. “One year, they gave my niece a ‘present’ which consisted of a bunch of newspaper articles about a recent hurricane…because my niece and the hurricane shared the same name.” And this year, Andrew thinks he’s definitely won the prize for the worst gift: A subscription to the Mayo Clinic Health Letter—the first edition of which included articles about suicide risk and carbon monoxide poisoning.

But, Andrew notes, his parents probably aren’t intentionally trying to give bad gifts. “They give gifts that they want you to have, not gifts that you actually need/want…” he wrote. “If nothing else, my sister and I have used this to teach our children how to accept terrible presents graciously.”

On that note, one reader on Twitter chided us for our question and offered an alternative:

That's negative – what about the best present? I was in jr school about 10, my parents bought me a 2nd hand microscope, which I discovered 6 weeks before Christmas by which time I'd seen ants, fly wings, feathers, all sorts of bugs. I still have it, 65 years later. Still use it.

Point taken! Still, we hope these stories help show some of the humor in the holidays—and perhaps serve as a practical guide to what not to give. Remember, gift cards are easy and perfectly fine.

Responses have been lightly edited for length and clarity.

“When I was about five or six years old, I was given a knockoff Barbie doll (it was hollow and not solid plastic like a ‘real’ Barbie). The wrapped gift was left overnight on our radiator on accident. When I opened it in the morning, the entire doll was melted into a demonic pose, complete with melted makeup and hair that clumped on the side of the doll’s head. The smell of melted plastic still reminds me of my childhood.” —Lynette, 47, San Antonio, Texas

“The worst gift I received was a portable camp toilet complete with biodegradable toilet paper. We do love to camp in the great outdoors, but I can’t imagine camping with this thing and…then what? How would you bring it home? Clean it and put it in your car? No thanks, that’s what bathhouses are for. I just politely accepted it and stashed it in our basement. It’s still there lurking in a dark corner.” —Valerie Thompson, 42, Seaford, Delaware

“When I was in college, my mom would send a gift early in [a] care package. It always included a Precious Moments figurine. Always. To a young man in college. I have yet to live that down.” —Chris, 41, Vinton, Virginia

“A T-shirt from my in-laws with a black widow spider on the front.” —Judith Ruth, 70, Fort Washington, Maryland

“My worst gift was a half-eaten peppermint chocolate patty. My younger brother had gotten it for me, but couldn’t resist tasting. That didn’t stop him from wrapping it and putting it under the tree!” —Barb, 78, Syracuse, New York

“The first Christmas we were going out, my then-boyfriend (now husband) gave me…nothing. That’s right, nothing. Turns out he was so afraid of getting me the ‘wrong’ thing that he froze and I got nothing at all. I was not amused, as my family spent a lot of effort on the right gifts for each person. *sigh* We spent the next year working on gift-giving. Turns out that engineers and their ilk just aren’t that good at gifting. Oh, and they suck at wrapping as well🤦🏽‍♀️. 35 years later and I still love the guy!” —Robin Sewell, 57, Aurora, Colorado