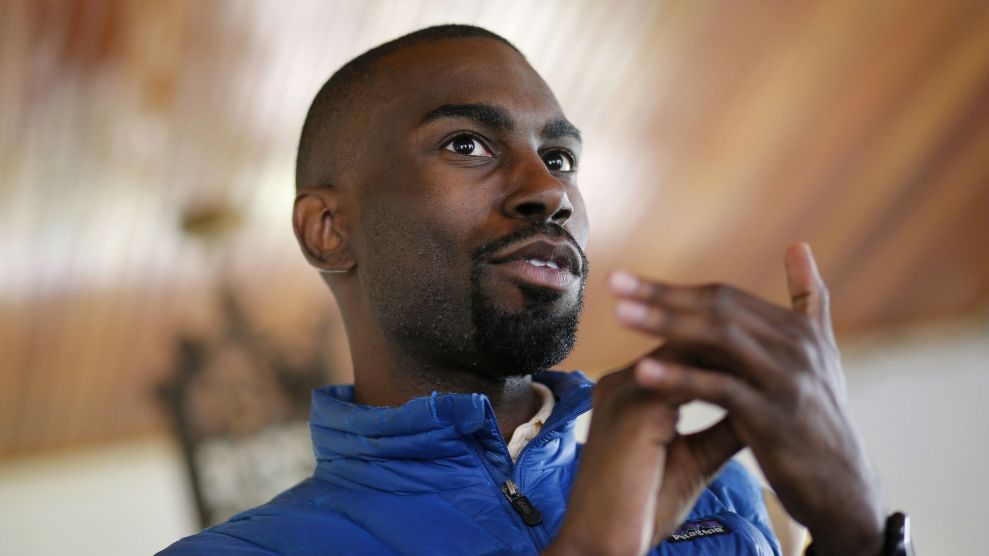 In the waning years of the Obama administration, a new generation of black activists emerged with a simple refrain for the streets and the tweets: Black lives matter. That rallying cry would go on to spark an international organization led by black women, several lists of policy demands, and a vast ecosystem of activists dedicated to transformative change.

One of the most prominent voices to emerge from that era was that of DeRay Mckesson. An educator by trade, he famously ditched his day job and drove several hours from Minnesota to Ferguson, Missouri, in 2014 after the fatal police shooting of Michael Brown Jr., an unarmed 18-year-old black man. As Ferguson’s mostly black residents rose up in protest over the killing, Mckesson, along with a swell of black activists and journalists, joined them and took to the streets. Before long, it was Mckesson’s vivid tweets and videos that became go-to content for anyone following the protests in real time. He did it all while alternating between a bright smile and a more serious, contemplative gaze, never without his signature blue vest.

Since then, that ecosystem of black activists has gone on to advocate for systemic change in a myriad of ways. Mckesson’s high-profile approach has included running for mayor of Baltimore, his hometown. More recently, he published a book, On the Other Side of Freedom: The Case for Hope, in which he tells stories from the frontlines of activism and gives a stirring account of how his identity as a black, gay man in America prepared him for one of the most contentious moments in recent American history.

Mckesson sat down with the Mother Jones Podcast to talk about the lessons he’s learned, and the ones he’s primed to give, in the ongoing fight for racial justice in America. This is an edited and condensed transcript of that conversation.

Jamilah King: So DeRay, you write really personally about the experiences that shaped your life and activism in this book. How difficult was it to share that publicly?

DeRay Mckesson: Writing a book was the most writing I’ve ever done in a concentrated period of time, and it was just hard. But there are a couple things I’ve just never written about—I’ve never really written about being gay. I’ve never written about my mother and what it would have meant to grow up in her absence. There are some things about the police…it was important to me that I create a space where we put some of the research that we’ve done and some of the ways that we think about the world and the work in one place.

So, it was definitely hard [because] I spent most of my time writing on Twitter or short-form platforms, but I was happy to get the full complete thoughts out.

JK: It’s interesting that you note the differences between writing tweets and then writing a book. What was that process like for you? Did you sequester yourself and just write for hours on end and days on end, or what groove did you find for yourself?

It’s so different with Twitter, [where] I’m trying to boil really complicated things down into things that can be repeated and processed very quickly. In a book, I actually have time to just tease it out and then unpack it in a way that was really refreshing, but also just different. When I give a speech, the audience can just fill in the other half. I can say, “No justice!” And people will be like, “No peace!” You can’t do that in a book. And when I’m talking, I can use my body, I can use the cadence, I can use those things. So I learned a ton.

JK: When you started getting involved with the Ferguson protests, you write about how you thought someone was going to show up and teach you the secrets of activism and give you a rundown of how organizing works. You realized that a lot of the tactics from, for instance, the civil rights movement, that have been used in the past were no longer applicable. Can you tell us about developing strategies and figuring out what worked and what didn’t?

DM: The reality is that the movement has to grow as people grow, and people have to grow as the movement grows. So the advice I would have is, there are some things that are constants: You need to know the issues well; we never let systems off the hook; [and] that most of the conditions that we fight against, or fight for, are rooted in something at the system level. I never confused collective action with the work of organizations. What was beautiful about St. Louis is that we just came outside—people came outside and kept coming outside. We weren’t members of an organization. We didn’t have to have a card. We just were able to be outside and be in the work, and that was really important.

So to your question about the legacy: The legacy people who have done this work before us couldn’t talk to a million people at every step of the way. We can. They didn’t have technology that allowed them to take these pictures and spread messages the way that we can. But what is common throughout all of these struggles is that relationships are the core part of organizing. You got to know the people you stand with, you got to know the people you serve, and then you have to have a vision for what you want the world to look like when you win.

JK: Are you saying that inevitably people might grow out of being on the front lines?

JK: So you kind of hinted at what’s changed since Donald Trump was elected. We’ve seen some fundamental shifts in progressive organizing since 2016. For instance, people are running for office who’ve never run before, groups are giving political endorsements where they didn’t in 2016. How did Trump’s election impact how you view your work as an activist?

DM: I don’t know if it impacted so much the way that I viewed my work as much as it certainly impacted the way the whole space changed. There are some people who really do think that the history of injustice in this country began with the Muslim ban. They’re like, “Wow, the country got really bad.” You’re like, “Eh, the country’s bad for a lot of people before the Muslim ban.” The Muslim ban is bad, that’s not the beginning of the bad, but it is particularly evil in this way.

Coming up: Jamilah and DeRay discuss his journey into activism and why he still has hope for the future on the Mother Jones Podcast. Listen to the full interview here: