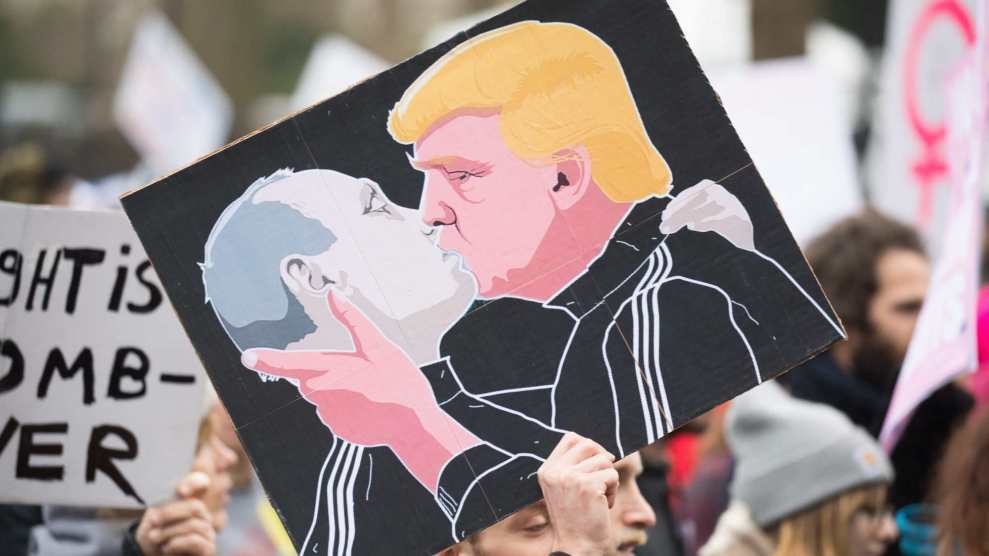 In June, the New York Times’ op-ed page published a video titled “Trump and Putin: A Love Story.” The brightly colored hand-drawn cartoon depicts a romance between the two leaders. Russian President Vladimir Putin is a strong, masculine man with a cool car; President Donald Trump is his doting loverboy. Putin leads them through the clouds on unicornback. Trump swoons. Their tongues tangle grotesquely.

The animation was met with backlash. Phillip Picardi of them and Teen Vogue said the cartoon was homophobic and “beneath us.” The Intercept‘s Glenn Greenwald tweeted, “Homophobia for progressive messaging is still bigotry.” Others pointed out that it was just another variation of the tired joke that “Trump is gay for Putin,” repackaged for the newspaper of record.

Just a reminder that the NYT published an animated cartoon using a series of flamboyant homophobic stereotypes to mock Trump & Putin on the ground that they're gay lovers – because that's an insult – and Dems are fine with it because the targets are right https://t.co/b9AM3kvFYa pic.twitter.com/oJA6m200Uv

It’s not just the New York Times. Since 2016, a flood of editorial cartoons, magazine covers, late-night skits, and memes have depicted Trump as being romantically involved or sexually attracted to strongmen and right-wing political leaders. Although intended to mock Trump’s strange—and noteworthy—political attraction to authoritarian leaders, these illustrations invoke old sexist and homophobic tropes. As they’ve become increasingly visible, some LGBTQ advocates and journalists have asked what message they really send.

Ange-Marie Hancock Alfaro, chair of gender studies at the University of Southern California’s Dornsife College, says it all comes down to old-school gender dynamics. “We live in a culture where there is this casual homophobia that still persists,” she says. “It becomes our default way of thinking about the world. Thinking about who has greater power and who has lesser power, we think about dominance and submissiveness.”

I drew this cartoon a year ago. They seem to be even closer now. #TrumpPutin #Trump #Russia #Collusion #Putin #PutinOwnsTrump #PutinOwnsGOP pic.twitter.com/NkilhrK7bD

Since the Times tweeted its Trump-Putin romance video on July 16, it has garnered nearly 1.5 million views, plus thousands of favorites, retweets, and replies—and that, says Hancock Alfaro, is part of the point. Cartoonists and the editors who publish them want to be provocative. “We rely on these old tropes, these old stereotypes, and say, ‘That’s going to have the biggest bang for our buck,'” she says. “I think that’s partly on the cartoonists themselves. But it’s partly the editorial folks, the people in charge who say, ‘This is not funny enough’ or ‘This is not punchy enough’ or ‘This isn’t going to make it in…What’s going to make this go viral?'”

The image of a bare-chested Putin on horseback that’s in many of the Trump-Putin images originated with the Russian strongman’s official macho persona. The Kremlin has released numerous photos of Putin riding, hiking, fishing, and even looking coyly away from the camera while holding what appear to be young tree branches in his jacket pocket. Over the past two years, the shirtless horseback image has been used to mock Trump in protest signs and in memes, often with the president “riding” behind his Russian counterpart.

Hancock Alfaro says these images seek to emasculate Trump by making him submissive—the “woman” in the relationship. “Putin is the rider, and Trump is just following behind,” she says.

Invoking anti-gay stereotypes to deride political figures is nothing new. One Twitter user was reminded of a 1939 cartoon depicting the marriage of Hitler and Stalin after Nazi Germany and the Soviet Union signed a nonaggression pact. Photographs of president George W. Bush holding hands with a Saudi prince in 2005 were spun into homophobic memes. In 2016, a mural in Bristol, England, showed pro-Brexit British legislator Boris Johnson kissing Trump.

All of the (deeply, deeply problematic) jokes about Trump and Putin being gay lovers always remind me of this cartoon about Molotov-Ribbentrop Pact. pic.twitter.com/QslSKC8Ibw

The Johnson-Trump mural paid homage to a famous 1990 photograph depicting a “fraternal kiss” between Soviet leader Leonid Brezhnev and East German leader Erich Honecker. In May 2016, that historic image was repurposed in a mural on a restaurant wall in Lithuania, where artist Mindaugas Bonanu painted Trump and Putin embracing. The restaurant’s owner, Dominykas Čečkauskas, suggested that the Brezhnev-Honecker painting had inspired the modern iteration. “[Trump and Putin] both have an ego that is too big, and it is funny that they get along well,” he said. “We are in a sort of a Cold War again, and America may get a president who will want to be friends with Russia.”

Homophobic anti-Trump images don’t just focus on his relationship with Putin. In June, cartoonist Ward Sutton imagined a romance between the American president and Kim Jong Un for the Boston Globe opinion section. A satirical poster spotted in the New York City subway by journalist Moira Donegan shows Sean Hannity kneeling with his tongue poised at the bottom of Trump’s long, red tie. (Here, for once, Trump is the dominant figure in the imagined sexual relationship.) “The way that some on the left are relishing their renewed access to homophobia is really depressing and creepy,” she tweeted.

The election of Donald Trump made a lot of people feel like they had liscense to be publicly bigoted again, and the way that some on the left are relishing their renewed access to homophobia is really depressing and creepy. pic.twitter.com/ai0ePkg4cv

Hours to go until #NorthKoreaSummit … can you feel the tension? My latest for @GlobeOpinion @BostonGlobe pic.twitter.com/MtxO4gx7Lx

It’s important to note and report on Trump’s troubling relationships with men he views as strong leaders. But homophobic, sexist depictions of Trump and the objects of his political affection do not meaningfully critique this tendency. As Hancock Alfaro notes, it’s disappointing to see such images coming from people who would not support negative or harmful depictions of LGBTQ people in other contexts. “I’m hopeful that political cartoonists on the left in particular would really start to think about how to do some of this differently,” she says. “It really is on us to figure out how to not be those folks.”