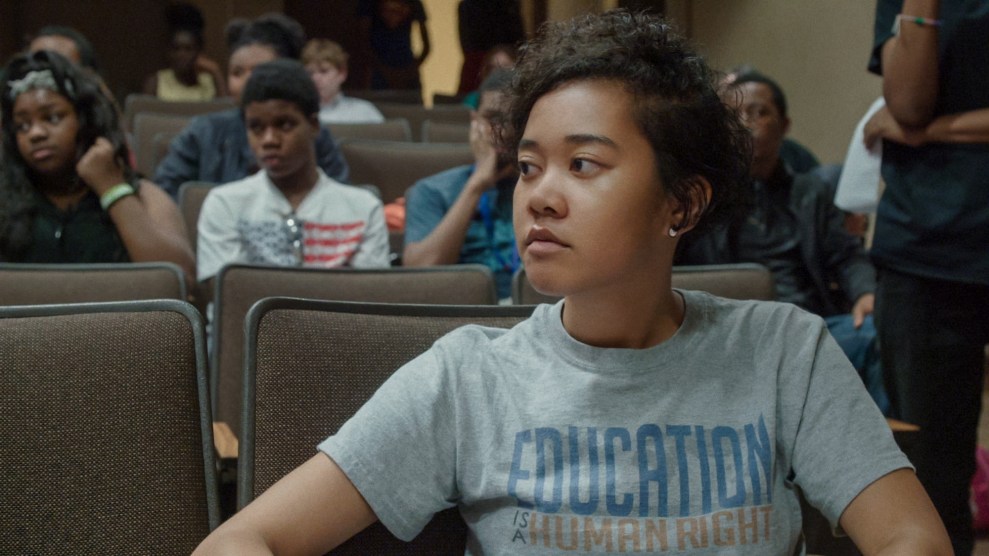 In 2015, shortly after a grand jury in Ferguson, Missouri, chose not to prosecute the white cop who killed an unarmed black teenager named Michael Brown, a suburban Chicago high school called Oak Park and River Forest High School gained national attention by holding a Black Lives Matter assembly for its black students. The idea, explained Principal Nate Rouse, was to give them a space to talk freely about what they were going through. But some white students and parents complained about being excluded, prompting an emotional school board meeting where teachers and community members came to the principal’s defense.

It was around this time that Academy Award-nominated filmmaker Steve James, famous for his 1994 documentary Hoop Dreams, asked for permission to make a documentary series about race and the achievement gap at the high school, which his kids once attended, and where I graduated about a decade ago. At first glance, it was a surprising choice, because in many ways OPRF has an elite reputation—it’s an extremely well-funded public school that boasts passionate teachers and ample programs, in a community long heralded for its progressive values and racial diversity. (The student body is 55 percent white, 45 percent kids of color.) But even here, while white kids excelled in honors classes, a school administrator pointed out that if things didn’t change soon, it would take 75 years for black kids at the school to simply achieve the Illinois state average on test scores.

While white kids excelled in honors classes, it would take 75 years for black kids at OPRF to simply achieve the Illinois state average on test scores.

James’ series America to Me, named after the Langston Hughes poem, premieres Sunday on Starz. It’s an intimate look at issues of racial disparity that often don’t get enough attention in liberal, largely affluent communities. Broken into 10 episodes, it’s told through the eyes of a dozen black, biracial, and white students, a mix of artists and athletes, scholars and underachievers, navigating everything from a first dance at homecoming to tryouts for spoken word club and financial troubles at home. They’re kids like Kendale McCoy, one of few black students in marching band, who’s also trying to make his mark on the wrestling team, where his teammates are mostly black and Latino; Chanti Relf, a biracial honors student and poet grappling with questions about gender identity; and Terrence Moore, a junior in the special-ed track who lives with his single mom.

The teenagers point out many things I remember well from my own days at OPRF: the way that tables sometimes segregate by race in the cafeteria, and how other spaces seem to color-code, too—certain clubs and teams like cheerleading attract more kids of color, while others like drill team are primarily white. The racial divisions in classrooms are especially stark, with few kids of color in AP and honors courses, more of a mix in regular courses, and not many white kids in the special-ed track. It can feel at times like two schools in one, despite the best intentions of teachers who wish it were otherwise.

But there were a lot of things I didn’t notice then as a white kid in the honors track. The way football players of color are taunted by white players on the other side, or how black security guards can feel ostracized by white staffers, pressured to always smile and “be bubbly, because if [you’re African American and] you not bubbly, then it’s a problem.” A biracial teacher remembers when a white kid called her the N-word in the hallway, and the outgoing vice principal breaks into tears while describing how white cultural norms dominate the administration. A black girl gets uncomfortable when her white physics teacher, who desperately wants to relate to his few students of color, plays rap music and comments on her natural hair; he later tells her he understands what she’s been through and knows she’s treated differently sometimes because “you don’t look like other people.”

The fact that I didn’t have to deal with these slights or think too deeply about them as a teenager—the drama of my life revolving around grades, a family divorce, basketball and track practice, and making friends—is a glaring reminder of my white privilege. And it highlights a big problem in many places like Oak Park, where white people today often fail to engage in discussions about race, sometimes “for fear of being viewed as insensitive, or even racist,” James says.

Their silence is unfortunate, given Oak Park’s pride in its history of racial consciousness. The town borders Chicago’s West Side, and in the 1960s, as more black people moved there from the city, the community distinguished itself from other suburbs by enacting fair housing policies to encourage integration and deter white flight. Today, Oak Park still draws families hoping to avoid more dangerous neighborhoods and poorly funded classrooms nearby in Chicago, as well as those who want to raise their kids in a place known for inclusiveness. But when it comes to the achievement gap, meaningful reform has been slow. In the documentary, some white residents get more riled up about funding for a fancy new swimming pool at the school than they do about the racial disparities in test scores. “For most white families in Oak Park, the school system works great—if you perform well, the sky’s the limit in terms of the colleges you can attend, so there’s just not the same motivation to make change,” says James. “That’s basically true of America; we seem to go round and round the same problems related to race, decade after decade, because for the most part it’s working fine for people in power.”

The beauty of America to Me is that the kids it follows have thought deeply about race and privilege, and unlike some others in the community, they’re not afraid to talk straight, even when things seem messy and complicated.

America to Me premieres on Starz on August 26 at 10 p.m. ET/PT. If you don’t have cable, you can watch by downloading the Starz app.