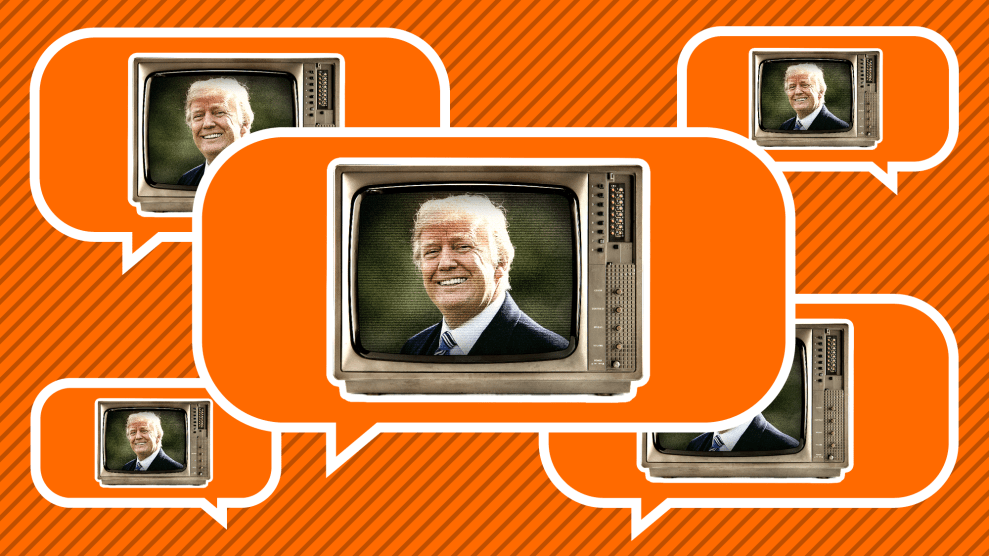 Judy Jones was watching the 11 p.m. news on her local NBC affiliate, WPBN, one evening when she saw her first “Terrorism Alert Desk,” a news segment that’s run daily across all TV stations owned by Sinclair Broadcast Group. Jones, a retired nonprofit director in Traverse City, Michigan, remembers thinking: “You’re kidding me—what kind of terrorism report are we getting on our local station?”

Since then, Jones says she’s noticed other segments that just didn’t seem to fit with her usual mix of local news updates, high school sports, and weather, which, she notes, “is very important up here.” These segments were much more nationally-focused, with a strong political slant. One was “Bottom Line with Boris,” a short commentary from Boris Epshteyn, a former Trump White House staffer who now serves as Sinclair’s chief political analyst. “I continued to watch for a couple of months, trying to figure out what the heck was going on,” she says. In March, she decided to stop watching the station altogether, despite following it for years.

“There’s something about getting a terrorist report that is really demoralizing, when there really isn’t a terrorist situation,” says Jones. “I feel really bad for the newscasters, because this is their job, and they’re good, local citizens.”

Last November, we reported on how Sinclair Broadcast Group, a media empire that currently owns 193 TV stations across the country, has been pushing conservative viewpoints into local news programming. Sinclair recently spurred outrage after it forced its anchors across the country to read the same script decrying fake news as “dangerous to our democracy,” the results of which were captured in a chilling viral video from Deadspin. (President Donald Trump rushed to the group’s defense, tweeting that Sinclair is “far superior to CNN and even more Fake NBC, which is a total joke.”) As our reporter Andy Kroll writes, “No media company—not even Fox News—has done more to ingratiate itself to the Trump administration than Sinclair.” And its influence will likely grow. If Sinclair successfully acquires Tribune Media, the group’s pro-Trump programming would reach three-quarters of US households.

When we first published our investigation into Sinclair Broadcast Group, we asked readers to share what they were seeing on their local news stations. We recently followed up on their observations—here’s what they said. (Responses have been lightly edited for length and clarity.)

“KATU read the mandated script about how one needs to be aware of fake stories and that KATU would always state the truth. When I heard this I knew something was very wrong. Then I heard what was going on. I can no longer watch on good faith my local news on KATU, channel 2, in my market. This is extremely dangerous. I am 70 years old and am not stupid.” – Janice Whiting, Tigard, Oregon

“We have WLOS in Asheville, North Carolina as our ‘local’ station and the only one available to us that even begins to discuss news of local interest to Western North Carolina… I was in disbelief when I first observed Mr. Hyman standing in front of his TV audience, arms crossed, and heard him discuss his “point.” He was so obviously preaching an opinion during the 11 p.m. news, that I thought at first I had inadvertently changed channels to Fox cable news. Since then, there have been all-too-frequent “news events” supplied to us as factually slanted, disguised opinion in lieu of any actual reporting that would allow us to form our own opinion of any particular event.” – Roy Osborn, Cullowhee, NC

“Before I ever heard about Sinclair Broadcasting I saw a “Boris Blurb” on KBOI, Boise’s local CBS affiliate. “Listen to this,” I said to my wife. “This is a commercial by a Trump organization.” I waited to see the disclaimer. It did not appear. It was masquerading as local news. I have set my machine not to record channel 2, will not watch it, nor will I assist it in any of its local endeavors.” – Michael Stoy, Boise, Idaho

“There was a half-hour spot on WLOS TV, the ABC affiliate in Asheville that is owned by Sinclair called, “The Rise of Terrorism: Clash of Cultures” with Sebastian Gorka. It is not listed as paid programming, a common thing in similar slots on Saturdays. It’s pretty classic anti-Islamic alt-right scare tactics. No credits, just straight into news at 6, a spot that might give it credibility by association in the minds of some parts of the audience. When WLOS in Asheville, a Sinclair station, ran their spot about ‘fake news’ by two members of the news staff they directed concerns to their ‘Content Concern’ page. I responded telling them [about the Gorka segment] along with a ‘shame on you and on Sinclair Broadcasting.’ Aside from that incident, which I found alarming, and the recent ‘statement,’ I haven’t noticed any other effects of Sinclair ownership on local news with WLOS. As far as any local news goes, WLOS is decent and even better than much of it out there. Sinclair concerns me, but WLOS news coverage has not been the cause of that concern.” – Lori Gilcrist, Mitchell County, North Carolina

“In the Portland, Oregon market, Sinclair owns KATU Channel 2. I have stopped watching on a regular basis, since I watched John Oliver’s segment on Last Week Tonight. I started noticing the ‘Terror Alert Desk’ segments as well as the ‘Bottom Line with Boris’ segments. I was shocked when the Boris segments started showing up, because I’d seen Boris being chopped off at the knees on Joy-Ann Reid’s weekend morning show. I lost all respect for my favorite local station. I really admired the local news staff but was very disappointed to see the propaganda being pumped into my living room, with no disclosures as to content or bias. It’s kind of sad, after all these years, they’ve been a staple. Now, if you can’t trust the source you’re getting your information from, there’s no point. I don’t mind having an occasional statement that I can go and verify and not verify, but when the agenda behind the story is being hidden, that makes me angry. ” – Kathey Roberts, Aumsville, Oregon

“Sinclair owns KATV, the ABC affiliate in Little Rock, Arkansas. My family has watched the station for decades. The Boris segments seem to be popping up more often, and they’ve always rubbed me the wrong way. The personality of the station is very community involved, while these segments don’t fit the tone and seem so forced. I’ve always thought that local stations shouldn’t have bias, and this to me is jarring—it’s made me dislike my favorite TV station. I don’t hold it against the personalities; I know it’s not their fault. They have to do it. It seems wrong that [Sinclair] can have so much influence.” – Anonymous, Little Rock, Arkansas

“I have watched WSYX-ABC 6 in Columbus, Ohio. I do not understand what all the hype is about. No one in this town watches 6 for news. It consistently finishes 7th place in a three horse race. The commercials or spots are so heavy handed and over the top, you cannot possibly take them seriously. Those “news” commentaries by Hyman and others are so dreadful, Howard Beale himself would shudder… I do not like the consolidation of news stations in this country—it might even be the reason why this country is so fractured now. Two different sides of America, separated by a wall of information, flinging crap back and forth, distracting us from the real problems in this country, and all the Kings horsemen standing idly by laughing at the distraction as this country is being plundered.” – Brian Commeans, Columbus, Ohio

If your TV station is owned or operated by Sinclair Broadcast Group, tell us what you’re seeing and what you think of the programming. You can check for your station on this map. We may include your response in a follow up story.

We may share your response with our staff and publish a selection of stories which could include your name, age, and location. We respect your privacy. Your email address will not be published and by providing it, you agree to let us contact you regarding your response.