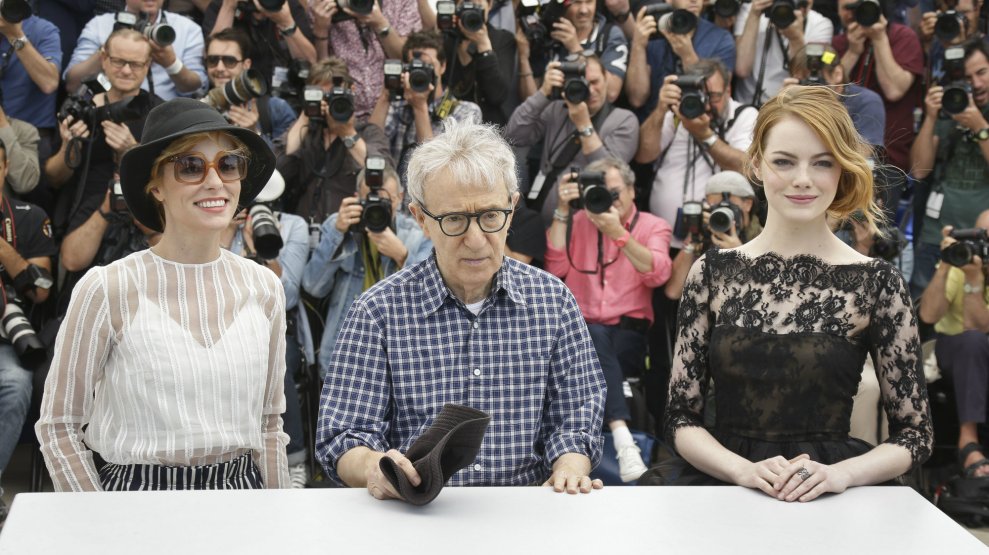 Could Woody Allen finally be having his #MeToo reckoning? Allegations of abuse have been swirling around the prolific actor and director for decades, but now, after a December Los Angeles Times op-ed from his adopted daughter Dylan Farrow questioned why Allen has been spared from the #MeToo revolution that has ousted other Hollywood moguls, he is seemingly, at long last, in the hot seat. She wrote that the #MeToo revolution has been “selective,” noting that numerous actors and actresses have readily dismissed Harvey Weinstein, but have said little about Allen. “Although the culture seems to be shifting rapidly, my allegation is apparently still just too complicated, too difficult, too ‘dangerous,’ to use [Blake] Lively’s term, to confront… It breaks my heart when women and men I admire work with Allen, then refuse to answer questions about it.”

Farrow also appeared in a CBS This Morning interview Thursday, publicly sharing her allegations on TV for the first time: “With so much silence being broken by so many brave people against so many high profile people, I felt it was important to add my story to theirs because it’s something I’ve struggled with for a long time. It was very momentous for me to see this conversation finally carried into a public setting.”

In 1992, Farrow accused Allen of sexually assaulting her when she was seven years old, and has since spoken about the allegations in a 2013 interview with Vanity Fair, and wrote about the assault in 2014 in an open letter in the New York Times. Allen has long denied the allegations, and though Farrow’s case has drawn intense public scrutiny over the years, it has not prevented Allen from continuing to profit from an award-winning career.

Actors who have worked with Allen, though, are now finally starting to speak out against him. Greta Gerwig and Mira Sorvino, for instance, have both recently since said they regretted working with Allen. But it’s not yet clear if the director will finally fall out of favor, and Gerwig and Sorvino seem to be more the exception than the rule. There’s a long history of actors who’ve starred in Allen’s films, including some of Hollywood’s biggest stars, side-stepping the issue, avoiding it entirely, or outright defending Allen. Notably, Alec Baldwin, who appeared in Allen’s 2013 film Blue Jasmine, defended the director on Twitter earlier this week, calling others’ renunciation of him “unfair and sad.”

Here, we look back at the actors who’ve appeared in Allen’s films (and his recent Amazon TV series) since Farrow’s 2014 letter and what they have said or done in response to the allegations—or, in many cases, how they’ve stayed silent.

Timothée Chalamet announced this week he’s donating his salary from the film to Hollywood’s Time’s Up initiative, the LGBT Center in New York, and the Rape, Abuse & Incest National Network (RAINN), the largest anti-sexual violence organization in the US. Chalamet said in an Instagram post that due to “contractual obligations” he could not comment on his decision to work with Allen, but wrote: “I don’t want to profit from my work on the film. I want to be worthy of standing shoulder to shoulder with the brave artists who are fighting for all people to be treated with the respect and dignity they deserve.”

Selena Gomez reportedly donated more than her salary from the film to Time’s Up Legal Defense Fund, an initiative housed at and administered by the National Women’s Law Center, but has not disavowed Allen publicly. When asked late last year whether she considered Allen’s past before deciding to work with him, Gomez told Billboard: “To be honest, I’m not sure how to answer—not because I’m trying to back away from it. [The Harvey Weinstein allegations] actually happened right after I had started [on the movie]. They popped up in the midst of it. And that’s something, yes, I had to face and discuss. I stepped back and thought, ‘Wow, the universe works in interesting ways.’”

Rebecca Hall donated her salary from the film to Time’s Up earlier this month. “After reading and re-reading Dylan Farrow’s statements of a few days ago and going back and reading the older ones—I see, not only how complicated this matter is, but that my actions have made another woman feel silenced and dismissed,” Hall, who also appeared in Allen’s 2012 film Vicky Cristina Barcelona, wrote in an Instagram post. “That is not something that sits easily with me in the current or indeed any moment, and I am profoundly sorry. I regret this decision and wouldn’t make the same one today.”

Griffin Newman tweeted in October that he would donate his entire salary from the movie to RAINN, saying he “deeply [regrets]” his decision to work with Allen. Even though he only appears in one scene, he says, “I can’t keep professionally operating from a place of fear. It’s time to show a courage in my actions mirroring my words without concession.”

Elle Fanning, Jude Law, Diego Luna, and Liev Schreiber have not commented on the allegations.

David Krumholtz tweeted in January that he “deeply regret[s]” working with Allen. “It’s one of my most heartbreaking mistakes. We can no longer let these men represent us in entertainment, politics, or any other realm.”

Justin Timberlake has not disavowed Allen, saying in November on The Late Show with Stephen Colbert that working with him was like “a dream come true.” Timberlake was blasted on social media for wearing a Time’s Up pin at the Golden Globes after working with Allen.

Kate Winslet has yet to comment on Allen in connection to #MeToo, and side-stepped the issue in a December 2017 interview with Variety. “It’s just a difficult discussion,” she said. “I’d rather respectfully not enter it today.”

Earlier, in a September 2017 interview with the New York Times, Winslet defended Allen, calling him an “incredible director.” “Of course one thinks about it,” Winslet told the Times of the allegations against Allen. “But at the same time, I didn’t know Woody and I don’t know anything about that family. As the actor in the film, you just have to step away and say, I don’t know anything, really, and whether any of it is true or false. Having thought it all through, you put it to one side and just work with the person.”

Jim Belushi has not commented on the allegations.

Rachel Brosnahan said in an interview on a Hollywood Reporter podcast this week that she regrets working with Allen. “I had a great experience working on that project. But I do have to take this opportunity to say that, for me, I have really struggled with the decision to do that project for a long time,” she said. “Honestly, it’s the decision that I have made in my life that is the most inconsistent with everything I stand for and believe in, both publicly and privately. And while I can’t take it back, it’s important to me, moving forward, to make decisions that better reflect the things that I value and my worldview.”

Miley Cyrus, when asked about Dylan Farrow’s allegations in an October 2017 Q&A with Variety, said, “I live a similar life to Woody—I live a public life. Until I know someone and I know their story, I never really judge anyone. That’s kind of how I went into it. From the way I saw him with his family, I never saw him be anything but an incredible person and a really great dad. People might slam me for saying that. I’m sure it was a hard time for that family. My family has been through hard things, and I think everyone’s suffering is different.”

Joy Behar has not commented on the allegations.

Jesse Eisenberg has defended Allen as recently as 2016, saying he had no problem working with the director. “It didn’t factor into my opinion,” he said of Farrow’s allegations in an interview that year with HuffPostUK. “I don’t think it’s appropriate to try people in the press. I have been tried in the press for minor, minor things because I mis-spoke or had a sarcastic line or something, so I understand what that’s like because I’m in the public eye, and it’s very painful.”

Blake Lively, while promoting the film, said, “It’s very dangerous to factor in things you don’t know anything about. I could [only] know my experience. And my experience with Woody is he’s empowering to women.”

Kristen Stewart said she was aware of the allegations in a May 2016 interview with Variety and had concerns about working with him, which she brought up with Eisenberg. “I was like, ‘What do you think? We don’t know any of these people involved. I can personalize situations, which would be very wrong.’ At the end of the day, Jesse and I talked about this,” she said. “If we were persecuted for the amount of shit that’s been said about us that’s not true, our lives would be over. The experience of making the movie was so outside of that, it was fruitful for the two of us to go on with it.” (Eisenberg has said he does not recall the conversation, according to Variety.)

Steve Carrell and Parker Posey have not commented on the allegations.

Joaquin Phoenix and Emma Stone, who also starred in Allen’s Magic in the Moonlight in 2014, have not commented on the allegations.

Colin Firth and Marcia Gay Harden have not commented on the allegations.