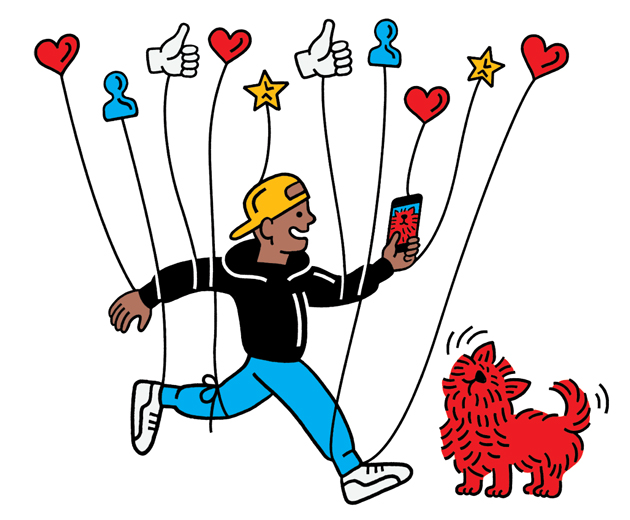 The Circle, published in 2013 by the prolific novelist (and McSweeney‘s founder) Dave Eggers, is a dire prophecy for our wireless world. Protagonist Mae, fresh from college, goes to work for the eponymous social network, a hyperdriven mashup of Facebook and Google that won’t stop until it knows everything about everything—and everyone. The story is an unsettling glimpse of a generation trained, like Pavlovian Instagrammers, to crave the rush of a post going viral, and it leaves you asking: How much privacy should we hand over to Silicon Valley? How much knowledge is too much? The movie adaptation, starring Emma Watson and Tom Hanks, was directed and co-written (with Eggers) by James Ponsoldt—a deft choice given The End of the Tour, his brilliant 2015 film about David Foster Wallace. As an author with a rosier view of technology, I jumped at the chance to chat with Eggers and Ponsoldt about their dystopian vision.

Mother Jones: How did the film project come together?

James Ponsoldt: I’ve been a fan of Dave’s writing since A Heartbreaking Work of Staggering Genius. I loved The Circle and I was terrified by it. My wife and I were on the verge of having our first child, and I recognized that we were both able to have childhoods that were undocumented, for the most part, and I didn’t know if my son would have that luxury. I felt really sad.

MJ: And what made James the right person for the job?

Dave Eggers: The book is about a young woman, and James has always done an amazing job with young actors and actresses. He’s not much older than Mae and has grown up swimming in the same waters she’s in, more so than me—so much of what I was doing was extrapolating what would come, as opposed to describing what is. That combination of expertise in technology and then a deeply humanistic point of view made him seem like a perfect fit.

“I was raised by ex-hippies, but I grew up worshipping a television set.”

MJ: Dave, when did you start thinking about the implications of how social media is altering our lives?

DE: For me, it didn’t have much to do with social media, actually.

DE: You always write one book and people read a different one. [Laughs.] I’ve been in San Francisco since 1992. I saw the Bay Area tech world reinvent itself many times, but it wasn’t until maybe 2007, 2008, 2009 when the concentration of wealth and power started to concern me. Also the surveillance aspect—the inability, increasingly, for us to opt out of being watched. I feel pretty strongly that a citizen under surveillance is not free. We have passively acquiesced to this, to the point where it’s almost a foregone conclusion. I think that was the impetus.

MJ: I’m not even sure we acquiesced so much as happily participated. In Amusing Ourselves to Death, Neil Postman writes that we were worried about Orwell’s version of surveillance, but it was Aldous Huxley’s that won out because it’s our own desires that have enslaved us. James, tell me about your evolving relationship with technology.

JP: It’s complicated. I was raised by ex-hippies, but I grew up worshipping a television set. I am skeptical of a lot of things, but I was on Myspace and Friendster, and I have a fascination with the new. My wife and I met on Facebook! We were on opposite sides of America, and a mutual love of Vic Chesnutt, a musician from Athens, Georgia, began a conversation. So I certainly can see everything it has to offer—and what we give up in that exchange.

“A funny thing happened on the way to utopia: We’ve turned into this surveillance society.”

DE: I always say to the college kids I talk to that I have no objection to people posting pictures and sharing stories online. That’s the beauty of the internet. But I try to talk to them about who owns that data and what are they consenting to, and that’s a conversation people don’t want to get into. A funny thing happened on the way to utopia: We’ve turned into this surveillance society and become a race of spies, where we track our kids and we track our spouses and we track our friends. I think very soon there will be an obsolescence of trust, because it’s much easier to access a person’s location than it is to ask—or to trust. When I ask 50 college kids who is conflicted about their technology use, 49 hands go up.

MJ: One of the things that struck me reading The Circle was the nagging burden that the need to participate in the public sphere places on Mae.

DE: Yeah, for 12 years I had a high school class called the Best American Nonrequired Reading. Not all the kids had smartphones, but there was a sense of near-constant social obligation, with fairly high costs for being absent for an hour. In the absence of the “like” there is the implicit “don’t like,” and that becomes a source of angst and want. I saw it happen to friends in their 40s who would say those very sad words—”Like me on Facebook”—to me. I thought, “Something really radical has changed when these dignified, educated people are saying those four sad words.” There are so many phenomenal things about these platforms, and the unintended consequences are either very tragic or very funny. I was trying to balance those two. Twitter has been instrumental in getting the word out about human rights issues or protests, and then you also have it as this horrific platform—a would-be despot in Trump uses it to spout falsities to 26 million people. So you’re giving a very dangerous megaphone to a cretin.

DE: I’d say half the people I’ve known here over the last 25 years are in tech, or have been. They found it terrifying in all the right ways.

MJ: What were the challenges in turning this book into a movie?

The movie “does not turn the ending around and make it happy—but it’s different.”

DE: When you adapt a book, you really have to cut it to the essence. James did an amazing job of finding that essential through-story and then picking and choosing parts to buttress that—because books are just big, baggy monsters full of speculation and a thousand notions. A film is a much more poetic medium.

JP: For me it was just trying to bottle the way Dave’s book made me feel. I found it insanely funny, darkly funny. I see myself deeply in the protagonist—her occasional pettiness and anxiety and her desire to not want to die anonymous. She’s really complicated and I wanted to do justice to that.

MJ: Will the ending be as bleak as the one in the book?

DE: [Laughs.] It does not turn the ending around and make it happy—but it’s different. Adaptations are a corollary, but without being dutiful.

MJ: So are we doomed to a future in which corporations increasingly manipulate our behavior and control how we express ourselves?

DE: Well, the bigger and stronger monopolies get, the harder they are to break. That said, none of these companies have been around for very long. James mentioned Friendster and Myspace—it always makes me laugh hearing those words—and then AOL, AltaVista, and on and on. If we look at the history…

JP: Dave’s right. And then, there’s really not a precedent for an industry whose value system is to help facilitate dialogue about how to think, how to find information and share it. Most of my friends in tech are progressive and idealistic, but they’re also making a lot of money. And it’s hard to stop making a lot of money. Companies don’t break themselves up voluntarily.

“At 2 billion Facebook users, will growth be allowed to stop?”

DE: You also have to look at companies like Facebook and LinkedIn. Their stock price only rises with increased usage and increased frequency of usage. So that creates a very unnatural and I think tyrannical pursuit of what I called in the book “completion.” Which is, these companies are infinitely more valuable the more they can study a complete group of users, without exception. I feel like that is going to be the next dangerous spot we find ourselves in—what companies will do to get all of this demographic, all of that region, all of this occupation, and you see them coming at you 19 different ways. At a certain point growth will stop, and that’s what’s curious. At 2 billion Facebook users, will it be allowed to stop? One of the themes in the movie is making voting mandatory through The Circle, which is very plausible under a privatization scenario. [Politicians] say, “Well, you have to vote, and you have to vote through The Circle, so you have to have a Circle account.” Not that Trump wants everyone to vote, but you get the idea.

MJ: James, for the past year or so you’ve used Twitter, somewhat presciently, as a platform to tell outrageous lies and crazy stories. Will you be tweeting about The Circle?

JP: [Laughs.] In some probably indirect way, sure. I’m living aspects of the movie, I guess.

MJ: What about you, Dave? Any chance we’ll ever see you on Twitter?

DE: [Awkward silence, then laughter.] I don’t think so. It’s really an old-dog-new-tricks kind of thing for me. McSweeney’s tweets. They can do it. I just don’t—no, no plans to.