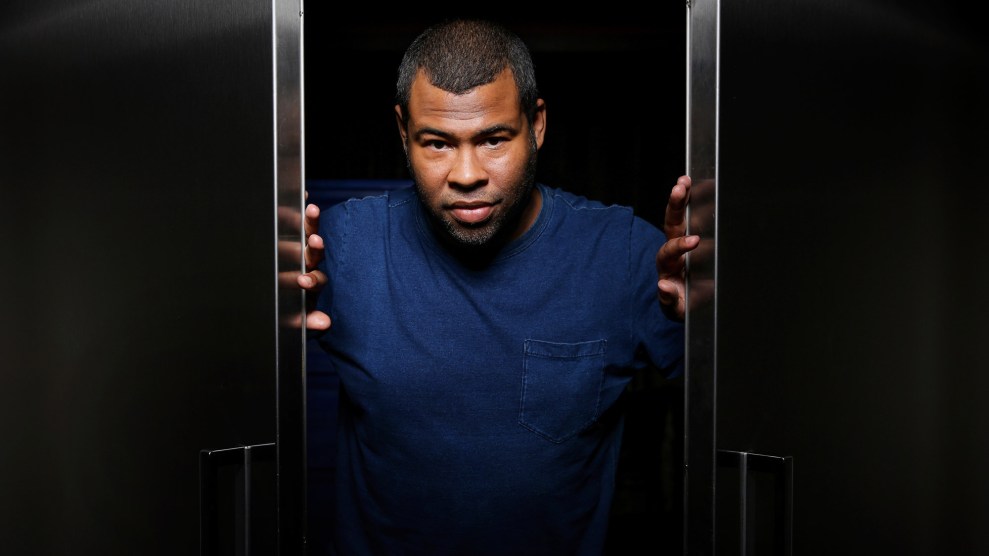 That’s the question photographer Chris (Daniel Kaluuya) asks his white girlfriend Rose (Allison Williams) before they venture off to meet her parents for the first time. She assures him everything will be fine. But Chris is rattled. Whether that assurance is enough in this faux-postracial America underpins the social commentary behind comedian Jordan Peele’s subversive horror film, Get Out, which opens Friday. The color of one’s skin—and how others respond to it—matters, whether or not the love itself is colorblind.

In his directorial debut, Peele, known for his previous foray in the sketch comedy show Key & Peele, carries us through the uncomfortable situation of the first encounter with the significant other’s parents. Except that in this case, Chris encounters Rose’s warm yet overly polite parents in a secluded, rural estate. Dean Armitage (Bradley Whitford), a neurosurgeon by trade, explains at one point how he would’ve voted for Obama for a third term and felt the need to let Chris know his father ran alongside Jesse Owens in the 1936 Olympics. Missy, a hypnotherapist, welcomes Chris with open arms. At a social gathering of the Armitages’ rich, predominantly white friends (with the exception of one Asian man and a dapper, strange “brother” named Andrew, played by Lakeith Stanfield), Chris must smile and nod. Equally as unsettling are the zombielike behaviors of the Armitages’ help, a black groundskeeper and maid plucked from a time long past.

What begins as a comedy guided by paranoia and discomfort takes a sinister turn, morphing into a psychological thriller about what Peele calls “the universal monster that is racism.” I spoke with the director about his social satire and why there aren’t not enough horror flicks for black and Latino audiences.

Mother Jones: At Sundance, you talked about how the idea for Get Out arose out during the 2008 presidential primaries. What was it about that moment that sparked the idea?

Jordan Peele: Barack Obama and Hillary Clinton were competing for the Democratic nomination, so there was this sort of understanding of gender civil rights and racial civil rights, and we were looking at the two in terms of one another. It got me thinking about my favorite movies—Rosemary’s Baby and The Stepford Wives—which are these thrillers that pulled off amazing commentary about gender. It got me wondering why there’s not a quintessential racial horror film since Night of the Living Dead. That set me off on the path.

MJ: Do you think this film will resonate differently now that Donald Trump is our president?

JP: I do. The conversation about race is inevitable. It’s one that people know that we have to have and continue to have. It’s very uncomfortable to talk about race. It often devolves before it begins. I think Get Out is resonating now because people are facing this problem, but want to do it in a fun way, if possible.

MJ: So much of the movie is grounded in discomfort and paranoia around social situations, from Chris’ first meeting with the Armitages to the huge gathering with friends. How much of that is grounded in your own experience?

“I’ve been in many situations where I’ve felt like the outsider because of the color of my skin.”

JP: That’s something every black person I’ve talked to certainly recognizes. Most minority groups would see some version of this. I would also imagine women feel this way. Race is a universal flaw in humanity. So yes, I’ve been in many situations where I’ve felt like the outsider because of the color of my skin.

MJ: What do you mean when you say race is a universal flaw in humanity?

JP: It’s in our DNA. Back when we were Neanderthals or whatever, we evolved to think along tribal lines. Survival was based on this idea of who are we and who are the others who will come and take our resources. I think it’s an animal and a human thing that we all see in terms of us vs. them, and race is a very easy way to separate who is us and who is them. I just think racism is within each and every one of us. It’s everyone’s responsibility to figure out how they deal with this kind of obsolete instinct.

MJ: Watching this movie reminded me of the first time I went to my girlfriend’s megachurch in rural Michigan. You get that sense of “Are they staring at me?”

JP: [Laughs.] Yeah, sure. Which side of the interracial relationship are you?

JP: Oh yeah, see, this is why I need to do a Latino Get Out next! It’s the same experience, this feeling of being the other. I’m sure you’ve been in situations as a Puerto Rican man where people are approaching you and the first thing they say is, I don’t know, using their limited knowledge of Spanish or their favorite food or somehow talking about Mexicans or something. It comes from a nice place. People are putting out their olive branches and trying to connect and trying to tell you, “Yeah, it’s okay. We can talk. We can find common ground.” What they don’t understand is that those conversations add up for us. They add up to a greater truth that I think we are faced with on a day-to-day basis as minorities, which is: We are the color of skin first and people second—even in these more pleasant conversations.

MJ: How did you decide to take that paranoia and transition it into something more sinister?

JP: I modeled this after some of my favorite movies. With a horror movie, you’re making a metaphor. You’re making a personalized nightmare for the protagonist. That’s what this is. It’s meant to get crazy to relay what the inner state and inner fears are representing.

MJ: Bradley Whitford, who plays Rose’s father, Dean Armitage, recently said that Get Out was a look at “unconscious, white liberal racism.” Do you agree with that?

“I used my skill set in comedy to plan the scares in this movie.”

JP: It’s a look at racism. The villains happen to be white liberals. Well, they don’t just happen to be—it explores a type of racism that I’ve seen in that group. But the movie is about the universal monster that is racism and the fact that it does take different forms. On the one hand, at its worst, it’s violence, it’s incarceration, it’s some form of true oppression. It also has sides of it that are, on the surface, harmless. For me, that doesn’t mean it’s not part of the same human demon.

MJ: What role did comedy play in shaping Get Out?

JP: I used my skill set in comedy to plan the scares in this movie. The entire premise has satirical overtones, like Stepford Wives. It makes an ironic commentary on the way we are. The last is the comedic-relief element; I bring in the Rod character (Lil Rel Howery) not only to release the tension, but also to satisfy this urge for somebody to say what we’re all thinking.

MJ: What is that ironic commentary on the way we are, in your view?

JP: It’s the fact that this is a horror movie about race, the notion that there might be some sinister modern form of slavery going on. Which is obviously ironic when you pair it with the notions of there are live-in servants in the house. There’s also satire and irony in some of the cultural choices within the movie. It’s a movie that has lacrosse sticks and bocce ball and bingo, all kinds of specifics that are stereotypically alien to an African American. And we find a subversive, darker take on those. That’s like the darkly funny stuff.

“When people get together, we are capable of the most beautiful, amazing things. But we are also capable of genocide.”

MJ: Okay, so why aren’t there more horror movies for black and Latino audiences?

JP: We haven’t done enough work to encourage minorities to strive to make movies. Hollywood is a place full of white male directors—there are many good ones. We just haven’t nurtured our voices. Since Straight Outta Compton, we’ve seen a big renaissance where untapped voices are getting their platforms to try some elevated work. I’m thinking of Donald Glover with Atlanta, Issa Rae, Ava Duvernay, F. Gary Gray, Ryan Coogler. It’s a relatively new realization in Hollywood that films with that sort of minority perspective can make money if you give us a shot.

MJ: When asked by the New York Times what scared you the most, you said, “Society is the scariest monster.” Why is that?

JP: When people get to together, we’re capable of the most beautiful, amazing things. But we are also capable of genocide. We can convince ourselves to do things in conjunction with one another that we wouldn’t have been able to do as an individual. You think of things like scapegoating or neglect of people’s suffering based on how close to us they are. How we act with each other really reveals our most animal instincts.