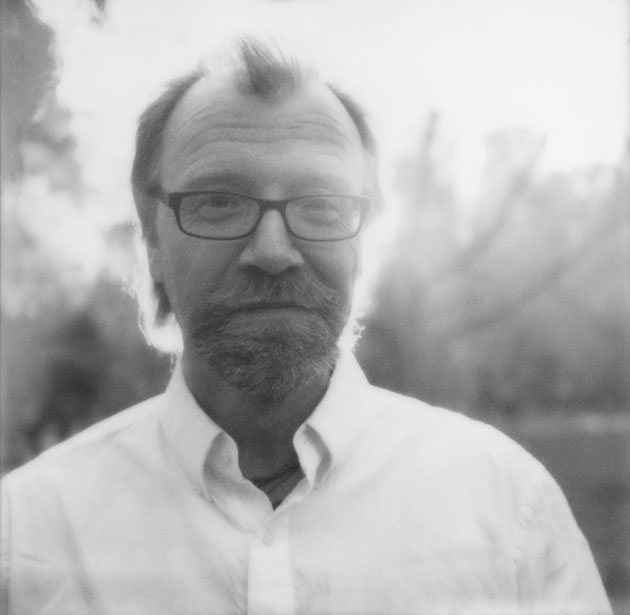 George Saunders used to be a short-fiction guy. A creative-writing instructor at Syracuse University, he was a 2013 National Book Award finalist for Tenth of December, his fourth story collection. But seeds for a novel were planted years earlier during a visit to Washington, when a relative pointed out Willie Lincoln’s crypt. The third child of Abraham and Mary Todd Lincoln died of typhoid in the winter of 1862, and the president was said to have sneaked out of the White House alone several times to visit his son’s corpse. “I imagined Lincoln with the body across his knees, like a mash-up of the Pietà and the Lincoln Memorial, and it just kind of stuck in my head,” Saunders says. 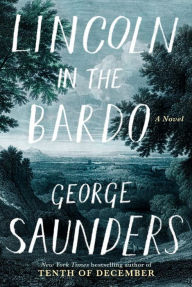 Much of the dialogue in his haunting debut novel, Lincoln in the Bardo, out February 14, is relayed by the bickering spirits of the cemetery in the days after Willie’s death—”bardo” is a Buddhist version of purgatory. Saunders spent much of 2016 in a purgatory of a different sort, attending campaign rallies for a deep-dive New Yorker piece on the psychology of Donald Trump’s supporters. I caught up with him a few weeks after the election to talk about ghosts, inspiring authors, and just what the heck is happening to America.

Mother Jones: Why write a novel after all these years?

George Saunders: I was trying like hell not to! This idea had been around for like 20 years, and about 5 years ago I gave myself permission just to fart around with it a little bit, and it kind of caught on.

MJ: Your book has no narrator. It’s really an extended dialogue among the characters—a few living, but most dead.

GS: Lincoln in the graveyard is pretty hard to dramatize because it’s just one guy. I thought, “Well, I need some witnesses.” And since it was at night, the idea of ghosts came up. I couldn’t figure out a way to tell that story in a more conventional format. In a lot of ways, these questions we refer to as structure or form or style are really just evasions. You’re trying to evade suckiness, and by maximally evading suckiness you might come up with something original.

MJ: Tell me about your research process.

GS: I’ve got hundreds of books on Lincoln from the Syracuse library and that I bought. When I wasn’t writing, I’d be just poring through. I got so addicted, it was almost like the contemporary world wasn’t so interesting and only 1862 was cool. But one of the focusing things about this is it’s just one night. I had to remind myself early and often that it’s not a biography of Lincoln. It’s not even about Lincoln! 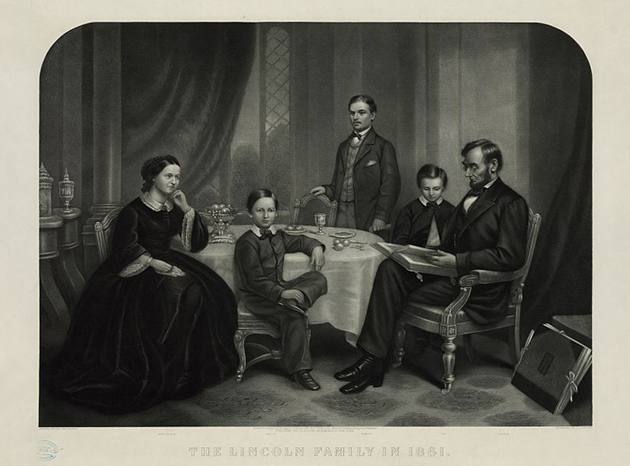 The Lincoln family in 1861, from left: Mary, Willie, Robert, ‘Tad,’ and Abe. Library of Congress

MJ: Are you a Civil War buff?

GS: I never really was, but nothing will turn you into a Civil War buff like five years of reading. Some of the letters that people wrote from that time are so deep and so beautifully articulate. And you realize, especially with the stuff that’s going on now in the country, that it’s always been chaos—people were disagreeing at least as much as they are now and 20,000 people would die in a day. It’s the scale that’s amazing, and also the proximity to our own time. I remember at one point seeing a photograph of basically a slave store in Atlanta. It’s where you’d go if you needed a slave. And you think, “Wow! That was not a long time ago.”

MJ: You dedicate this book to your kids. What was it like, as a parent, to spend so much time thinking about the death of a child?

GS: It was touchy. I honestly couldn’t have done it when they were Willie’s age, little kids. It sounds kind of corny, but we seem programmed to love each other and to have our special attachments to people, and certainly our kids. And those are so raw and so powerful, you can’t even turn your mind in a direction of that kind of a loss. When you’re talking about [Abe] Lincoln, you’re like, “Okay, now he’s got to dust himself off and go win the war.” That’s not how that works. The historical accounts indicate that he never recovered. And he didn’t live that much longer. 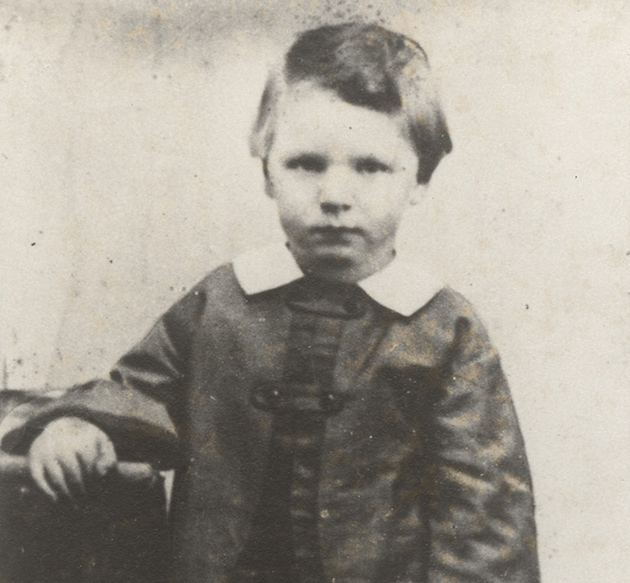 Willie Lincoln died in 1862. He was 12. Wikipedia Commons

MJ: Do you believe in ghosts?

MJ: From time to time.

GS: I definitely believe in them dramatically. For example, I’m standing here in front of this 1920s bungalow in LA. If you just describe the physicality of the place, you’re only getting a fraction of the truth, which is that if you went back to 1946 there was some dude standing here in a fedora who’s now dead. That’s as true as the fact that there’s a lawn chair sitting here in front of me. To give a story broader shoulders, you have to sometimes push off into the supernatural or the sci-fi, not as a way of avoiding reality, but of accommodating it correctly. I actually do believe in life after death. In the book, I tried to make it funny and weird enough that it didn’t resemble an afterlife that we had seen somewhere else. When you die you don‘t go, “Oh, it’s just like I read about.” It’s more like, “Oh shit, what is this?”

“I got so many letters from Trump supporters on that piece, and they start off really rough.”

GS: I got so many letters from Trump supporters on that piece, and they start off really rough. I try to engage each person somewhat deeply, and I can point to the moment in the exchanges when it goes from that mode to a personal mode. Suddenly all their decency comes out. But in the public sphere: At a rally it’s bad; on the internet it’s 10 times worse. We’ve got a real problem with social media that we didn’t know we were going to have. It’s almost like the demons have gotten out of the box. I’m thinking I’m going to stay off the internet as much as possible and try to change my data mix so that more of it is coming from firsthand experience and interactions.

GS: I’m repledging myself to human-scale values. As a fiction writer, the best data comes through the senses and is then processed through many revisions. We have to learn to be intelligent assessors of the data coming in to us and what it’s doing to our mental process. [It’s one thing] if the two of us are sitting at a table talking about something charged, and I know you and you’re a friend and we have a history, but a great deal is coming into our heads that’s agenda-laced and written quickly from someone you have no connection with. Human beings are not necessarily designed for a high level of that kind of data.

One of the things I noticed about the Trump supporters was a lot of projected fear. I can’t tell you how many times a conversation went like this: “We’ve got to stop these immigrants, because it’s terrible.” I’d say, “Okay, what personally have you observed about this?” And there would be basically nothing in that box. And I’d say, “Where’d you get your information?” thinking they were going to say Fox. But they would always say, “Well, I get my information from all kinds of sources.” Fox is kind of center-left to a lot of people now.

MJ: What do you read to take your mind off the world?

“I’ve been almost like a piranha—I’ll dart off and take a little bite of a little side and come out. I’d like to try to take on the whole thing.”

GS: I read more to put my mind back on it. I have a pretty active work and travel life, and several days will go by when I haven’t had a deep feeling—I’ve just been kind of checking off the boxes. So I read to make myself feel awake. Zadie Smith has a new book called call Swing Time and I just had a beautiful experience with that where, suddenly, you know that feeling where you read something and then you walk out on the street and suddenly everything is three- or four-dimensional again? Everything smells more. The light is brighter.

MJ: So what’s your next dream project?

GS: That’s exactly what I’m asking myself. I’m turning 58, and you get that kind of weird, old-guy feeling of you don’t have an infinite number of years left and if there’s anything you want to say or represent, it’s time to try it. I’m a big lover of America. I love the people, but also the weird berms, the strange little high schools tucked away in different places, and just the whole geography and the psycho­logical apparatus of Americans. Up until now, my work has always been kind of empowered by constraint. You say, “Okay, I’m writing a six-page story. It’s set in a theme park.” I’ve been almost like a piranha—I’ll dart off and take a little bite of a little side and come out. I’d like to try to take on the whole thing.

MJ: Who inspires you to write?

GS: Hemingway was a big influence early—In Our Time and those books. And Tobias Wolff is a huge hero of mine. Toni Morrison, Alice Munro, Stuart Dybek. I’m a big fan of the Russians: Isaac Babel is just an exquisite line-to-line stylist.

MJ: That’s an ironic name for a wordsmith.

GS: He was a cool dude, a Jew who traveled with the Cossacks. He was killed by Stalin. Babel was like, “I’m going to talk to everybody, honor everybody’s viewpoints, and then I’m going to present it in this really complicated stew that feels almost insanely true.” It’s violent and it’s contradictory and people are beautiful and savage in the same paragraph. It might have a particular relevance for right now. We’ve been very fortunate the last X number of years to have our political fights in roped-off spheres, very safe. Now we’re starting to see how nasty it can get. I just got a text from a friend in Missouri. He’s driving in his BMW and this guy pulls up alongside him, pulls a .350 Magnum, and says, “Why don’t you buy a fucking American car, motherfucker?”

GS: So Babel is a good writer for now because he was the darling of the Soviets and then one day he wasn’t. They beat all these confessions out of him, and then he recovered enough to ask them to please retract those—and they shot him. 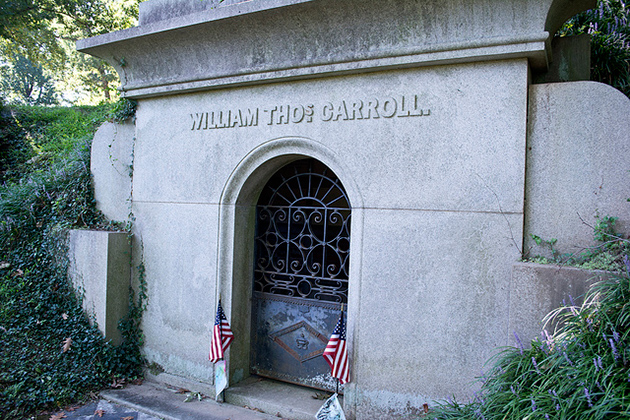 The DC crypt where Willie Lincoln’s body rested prior to his funeral. Flickr/Tim Evanson