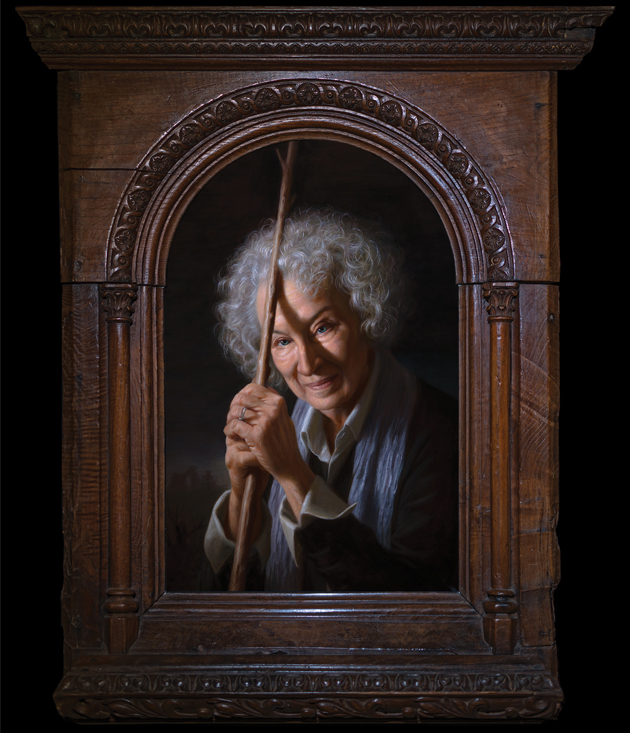 The prolific author, poet, and playwright Margaret Atwood first hit it big with The Handmaid’s Tale, her 1985 novel in which women are tightly controlled as reproductive vessels. Less known, perhaps, but no less richly rendered, is her MaddAddam trilogy, which culminated in 2013 and imagines civilization beset by a “waterless” flood—a man-made biological catastrophe. (Darren Aronofsky is producing a TV version for HBO.)

“What’s the modern equivalent of being stuck with your teenage daughter on an island where there’s nobody but some supernatural beings and half a witch?”

Atwood’s speculative worlds serve as portents for our own, even as her wry wit sweetens the bitter pill. She’s first and foremost a master story­teller, which is probably why, when Hogarth Press asked her to reinterpret a work by none other than William Shakespeare, she didn’t blink. (The publishing house has also commissioned other respected authors to reinterpret Shakespeare’s plays; Jeanette Winterson took on The Winter’s Tale, while Edward St. Aubyn is due to deliver his version of King Lear in 2018.)

Out this week, Atwood’s novel Hag-Seed is spun from The Tempest, one of the Bard’s most enigmatic works. In the original, Prospero, an exiled duke and sorcerer, is stranded with his daughter, Miranda, on a remote island, where he enslaves the deformed Caliban (nickname: Hag-seed), conjures up a storm, and then conspires with local spirits to seek revenge on his shipwrecked enemies. Atwood reimagines Prospero as an embittered theater teacher working in a contemporary prison where a staging of The Tempest by inmates takes an unexpected turn.

Mother Jones: Why The Tempest?

Margaret Atwood: The characters have always been favorites of mine. It is one of his meditations on art—what it does.

MJ: Is that what you thought when you first read it?

MA: No, I thought it was about weird stuff. [Laughs.] I have seen it a number of times since, and in preparation for this I saw all of the films available, including the one with Helen Mirren in which Prospero is Prospera—you wonder, “Would it work?” But it does, because anything she does works.

MJ: You were pretty courageous to take a fresh stab at one of the Bard’s most challenging plays.

MA: Well, you agree to things without actually thinking about how much work it’s going to be. It wasn’t Shakespeare that concerned me as much as it was a looming deadline.

MJ: I meant more that this particular play has been so debated and picked apart.

MA: One of the reasons Shakespeare is so endlessly fascinating is that you can look at that figure from about 10 different angles: Caliban in Shakespeare’s day was probably viewed as a sort of comic, barbarian type, but into the 19th century there were productions where Caliban was the hero. He’s a potential rapist of a minor. Is that a good thing? No, it is not. On the other hand, Prospero’s got him cooped up in a cave and tortures him if he doesn’t do what Prospero wants. Is that a good thing? No. Shakespeare doesn’t let you off easy.

MJ: It’s interesting that you set your Tempest in a prison.

MA: When you reread [the original], you realize there are at least nine prisons in the text. In a play that ends with the words “set me free,” you have to take that into account. What is it Prospero needs to be set free from? Why does he feel so guilty? That epilogue has always been extremely intriguing to me. I started with the questions it raised and worked backward.

“We are very short on organs. The pig solution is probably a lot better than the human clone solution—though maybe not for the pigs.”

MJ: Did you sit in on any prison Shakespeare classes during your research?

MA: No, but I read books about them. In Shakespeare Saved My Life, [author Laura Bates] said she got better papers from [prisoners] than she got from people in her regular classes. Because she was teaching, of course, Macbeth, and a number of them had murdered people. The guy who wrote the best paper said, “You do have this, ‘Is this a dagger which I see before me?’ before you do it, but in my case it was a gun.” With Hag-Seed, the dramatic problem was: What’s the modern equivalent of being stuck with your teenage daughter on an island where there’s nobody but some supernatural beings and half a witch? There isn’t one. So I created a different sort of Miranda.

MJ: Have you ever been in jail yourself?

MA: No, although I’ve been involved in activities with other people who were put in jail. We were protesting the closing of the prison farm program at the prison I used in a previous book, Alias Grace. Some of us also put up money in order to save the heirloom herd of cows there. So I own half a cow!

MJ: Speaking of livestock, one thing that stuck with me from your MaddAddam books was the pigoons—pigs that are raised to grow human organs and then start showing human qualities. Where did that idea come from?

MA: I grew up amongst biologists. They’ve made some breakthroughs—they’re a lot closer to actually doing that. I don’t think it’s necessarily a bad idea. We are very short on organs, and the pig solution is probably a lot better than the human clone solution—though maybe not for the pigs.

MJ: I liked how the pigoons were raised at OrganInc Farms, where “it was notice­able how often bacon and ham sandwiches and pork pies turned up on the staff café menu.”

MA: Okay, so once I was in Texas, where they had this thing called Ralph the Swimming Pig. You went into a theater and you were looking through a great big window at people dressed as mermaids swimming around with oxygen tanks. One of the mermaids had a bottle of milk, and a small Ralph the Swimming Pig dove in and swam over. Naturally, afterward, I said in the cafeteria, “What happens to the Ralphs when they get bigger? Would you serve Ralphs who have retired?” “Oh no! We would never do such a thing.”

MJ: You also imagined headless chickens grown in labs for the meat.

MA: The idea of the chickens with the multiple breasts and thighs came from an urban legend that some fast-food places had developed chickens with four thighs. It wasn’t true, but it is a suggestive rumor. [Hear Atwood talk about pigoons on a recent episode of our food politics podcast, Bite.]

MJ: Do you eat meat?

MA: Once in a while. I don’t think it’s a question of whether you eat meat. It’s a question of what kind of meat, and where it comes from. The farther north you go, the fewer fruits and vegetables there are. What kind of apple trees do you suggest the Inuit get their apples from? And how much oil is expended transporting such things out there? It’s an equation.

“I used to act in college, but always comedy. Didn’t do Shakespeare—did Ben Jonson.”

MJ: You’ve written plays. Were you ever an actress?

MA: Yes! [Laughs.] How did you guess? I used to act in college, but always comedy. Didn’t do Shakespeare—did Ben Jonson.

MJ: Shakespeare is a master of the witty insult. Got any favorites?

MA: It’s in Macbeth: “The devil damn thee black, thou cream-faced loon.” I seldom have occasion to pull it out, but it’s ready and waiting!

MJ: Okay, conspiracy question: Do you believe Shakespeare really wrote all the works attributed to him?

MA: Absolutely. The attempts to say they weren’t are based on social snobbery—the idiotic idea that only aristocrats can write well, whereas most aristocrats can’t write worth shit. Have you read Ben Jonson’s eulogy on Shakespeare? It’ll convince you. He nailed the guy. It contains the very famous line: “He was not of an age, but for all time.”

“One of these days I’m going to die. I expect that when I croak I’ll no longer be using Twitter.”

MA: Even in the tragedies, Shakespeare always put in parts for the comic actors because his audience was mixed. He puts in people who talk like aristocrats. He puts in idiots and fools. He puts in certain middle-range characters. And when you go to the Globe, you realize very quickly how that all works. You’re not far from the stage wherever you are. The people who paid more sat in seats around the edge. Everybody else paid a penny. They put it into a tin box—that’s why we call it the “box office.” They stood in the pit, basically, but they were very close, so when Hamlet was doing his soliloquy, it was addressed to you, the audience—right there.

MJ: Grief and loss are central themes in Hag-Seed. Has anything happened in your own life that made you want to focus on that?

MJ: Yet you’re super active on Twitter. Think you’ll ever tire of the pace?

MA: Well, I hate to break this to you: One of these days I’m going to die. I expect that when I croak I’ll no longer be using Twitter, unless I can do it from the grave. That would be fun. Mary Baker Eddy is said to have had a phone installed in her coffin just in case she happened to wake up. I’ve been told that’s an urban myth. Somebody should check it out.