It would be impossible to fully replicate the depth of dread and disbelief that Command and Control—Eric Schlosser’s 2013 book chronicling the Air Force’s history of nuclear weapons mishaps—bestows on its readers. This is not to say that the haunting new documentary of the same name, co-written by Schlosser and director Robert Kenner (Food, Inc.), doesn’t pack a punch. While the film’s producers were forced to simplify and trim from the book’s deeper content, any viewer who has not read the original or who, like most Americans, pays little heed to our modern nuclear arsenal, is due for a fine scare. Just check out this exclusive clip:

The contextual backdrop of Schosser’s book includes plenty of the kind of Cold War insanity that Americans have by and large relegated to the attics of our memories: the rush-rush nuclear buildup stewarded by the hawkish Strategic Air Command boss General Curtis LeMay, the existential nuclear standoffs between John F. Kennedy and the Soviet Union’s Nikita Khrushchev, the WarGames-esque computer glitches that falsely signaled Soviet nukes flying our way, and the shock of General William E. Odom, a national security adviser under President Jimmy Carter, upon receiving a briefing on the SIOP, the nation’s top-secret plan in case of a nuclear conflict: “It was just a huge mechanical war plan aimed at creating maximum damage without regard to the political context,” Odom said. “The president would be left with two or three meaningless choices that he might have to make within 10 minutes after he was awakened after a deep sleep some night.”

The nuclear crisis that unfolds in the film demonstrates the stark limitations of the military’s command-and-control structure.

But Schlosser’s coup de grâce was a list he obtained (via freedom-of-information requests) detailing a litany of nuclear fuckups by the Air Force. Although the brass typically blamed human error, the record in its totality suggested that America’s systems for safeguarding its nuclear weapons were profoundly broken, were they ever working in the first place. Some incidents were fairly minor and others reflected organizational ineptitude—an accidental shipment of missile nose-cone fuses to Taiwan, nukes sitting around in barely guarded storage igloos on foreign tarmacs, things like that. But the scariest part by far was the tale after tale of actual near-misses: nuke-laden B-52s fragmenting in midair, crashing and scattering radiation; immensely powerful warheads exposed to fire and intense heat and hurled or dropped into American fields and swamps. Yet somehow, by the grace of God, there was never an accidental nuclear detonation on American soil.

The film—which opens on a scene in September 1980, as young maintenance guys suit up to work on a Titan 2 missile in Damascus, Arkansas—features great archival footage and reenactments shot in a decommissioned silo complex. Command and Control dutifully follows the book’s basic outline. The central narrative thread involves a technician’s mistake at a Titan 2 silo that ended with the explosion of a missile whose warhead was more powerful than all the bombs America dropped in World War II combined, the nukes included. (The warhead didn’t detonate, obviously, but at the time nobody knew that it wouldn’t.) 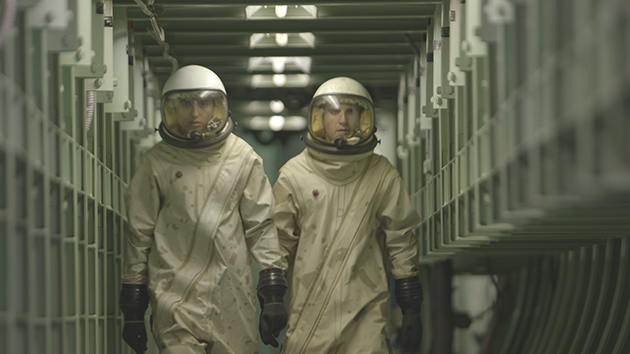 This part of the story is related onscreen by the same former airmen, commanders, journalists, and politicos who appear in the book—largely men who were there or otherwise involved. Among them is then-Senior Airman David Powell, basically a kid on an Air Force maintenance team when he dropped a nine-pound socket head down the silo shaft, puncturing the missile’s fuel tank. (To get a taste, read the scene as it appears in Schlosser’s book.) What comes after serves as a potent illustration of the breakdown of the military’s command-and-control structure, designed to prevent such accidents and deal with them effectively should they happen. Spoiler alert: Bad decisions are made by know-nothings up the chain of command, and bad things result.

“Nuclear accidents continue to the present day,” says a former defense secretary. “The degree of oversight and attention has if anything gotten worse.”

A film, of course, delivers something a book cannot. We get to see real footage from nuclear detonations, from the actual Damascus Incident, and from some of the past nuclear mishaps. Most gut-wrenching by far was the accidental release of two H-bombs over Goldsboro, North Carolina, in 1961—such an insanely close call that I shudder to contemplate it. Better yet, we get to meet and hear directly from the Damascus men, including former Senior Airman Powell, an otherwise cheerful guy who tears up as he recounts how, after more than three decades, not a day goes by that he doesn’t think about that socket slipping from his hand—and the chain of events it set off.

As in the book, the tense Damascus narrative plays out against the backdrop of a nation bumbling its way along the nuclear learning curve. As Schlosser notes in the film, we’ve built some 70,000 nuclear weapons over the years, and the fact that none has detonated by accident is a testament to the smarts of the weapons designers at the Sandia Lab—guys like Bob Peurifoy, a regular presence in the film, who worked their asses off convincing the brass to install fail-safe devices on the bombs. But there’s yet another key factor at play, Schlosser says: “pure luck.” And that, my friends, is unbelievably scary. Because, to quote Schlosser, nuclear weapons are simply machines, albeit “the most dangerous machines ever invented. And like every machine, sometimes they go wrong.”

Watching the quaint archival footage, a viewer would be tempted to view this problem as history, but to do so would be to bury one’s head in the sand. We still have plenty of nukes sitting around, including hundreds of obsolete land-based missiles that are now essentially babysat, as our reporter Josh Harkinson discovered, by a bunch of disgruntled kids. The military screws things up routinely, of course, even if the public seldom hears about it. “Nuclear accidents continue to the present day,” Harold Brown, who was defense secretary under Jimmy Carter at the time of the Damascus Incident, says in the film. “The degree of oversight and attention has if anything gotten worse, because people don’t worry about nuclear war as much.”

But there’s yet another key factor at play, Schlosser says: “pure luck.” And that, my friends, is unbelievably scary.

It’s not just the US arsenal we need to worry about, however. North Korea just tested its most powerful nuke to date. And bitter enemies India and Pakistan are still young nuclear powers. Suppose a Pakistani nuke were to detonate accidentally. The first face-saving instinct might be to blame India. Not good. Peurifoy spent his entire career designing nuclear safety devices, and he believes an accidental detonation is inevitable, sometime, somewhere. “It will happen,” he says in the film. “It may be tomorrow or it may be a million years from now, but it will happen.”

Command and Control is now showing in selected theaters. Click here for dates, cities, and venues.