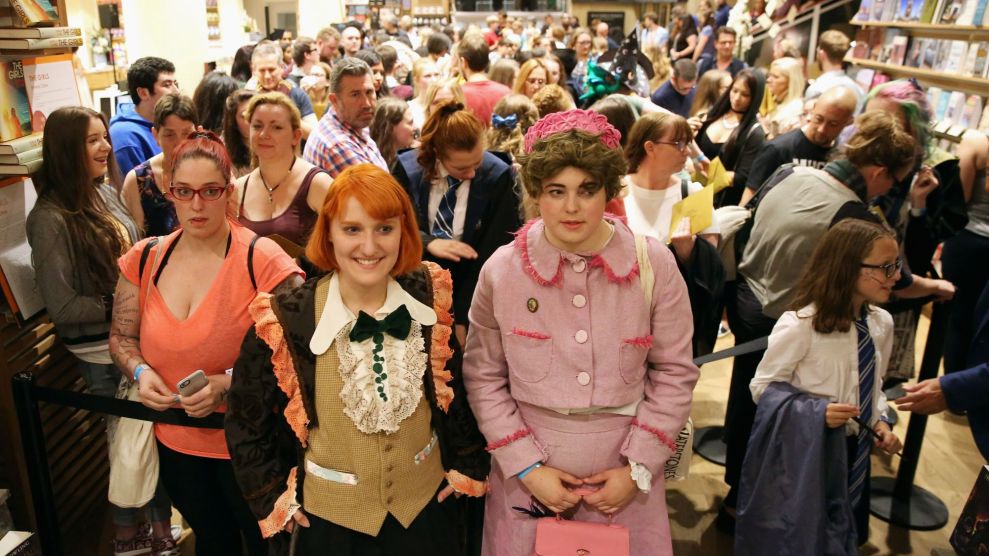 Fans queue to receive a copy of the book of the play of Harry Potter and the Cursed Child parts One and Two at a bookstore in London, Britain.Neil Hall/Reuters via ZUMA Press

When I was a preteen I was so obsessed with Harry Potter novels that I spent New Year’s Eve on a Harry Potter message board. In fact, that’s what I did for most of my winter break: my family wasn’t the vacationing type and I was too young to really go out, so for countless hours I stared at my computer talking to other HP fans. (This was back when message boards were still a thing and avatars mostly consisted of cribbed celebrity photos.)

My obsession eventually died out, but going to see the last Harry Potter film, “Harry Potter and the Deathly Hallows,” in 2011 was still a bittersweet affair for a 20-year-old. It felt like both a farewell to a drawn-out childhood passion and the beginning of accepting the reality that there would no longer be any more Harry Potter books or movies to look forward to. I was, finally, an adult.

But now Harry Potter is back. Kind of.

Earlier this summer, a new play featuring a middle-aged Harry Potter, “Harry Potter and the Cursed Child,” previewed in London to rave reviews. On July 31—coincidentally Harry Potter’s and J.K. Rowling’s birthday—the script was released as a book, just like in the good old days, at midnight with hundreds of fans flocking to bookstores to get their hands on the first copies. The script, written by Jack Thorne and based on a story by Thorne, J.K. Rowling and director John Tiffany, has garnered praise from some critics and mixed reviews from others, but it’s also led to a collective spewing of joy, tears and fervor over the latest Harry Potter adventure.

See some of the best reactions below.

Dying, slowly dying. FINALLY GOT MY HANDS ON #CURSEDCHILD pic.twitter.com/evptSjn2y3

#HarryPotterAndTheCursedChild will be the first HP book I buy that wasn’t purchased with my parents’ money. #AdultLyfe

A small good thing: it’s 2016 and children are still pleading to be taken to bookshops at midnight. #CursedChild

(To a customer)
“Would you like a bag for that one?”
“No thanks, I just want to stare at it until I get to the car” #CursedChild

Happy birthday #HarryPotter AND @jk_rowling. And of course a warm welcome to #HPScriptBook #CursedChild pic.twitter.com/2UYaYSKGum

I finished all of The Cursed Child, I stayed up all night really. Thank you @jk_rowling for continuing this amazing series. @pottermore

And just like that…the era is over. And so is part of my soul. ?? #HarryPotterAndTheCursedChild pic.twitter.com/u6J76E3tle

J.K. Rowling saddened a number of fans when she announced at the play’s premiere that Harry Potter is “done now.” But at the very least, a new movie based off a book in the Harry Potter universe, “Fantastic Beasts and Where to Find Them,” opens in November.

And will I be rushing out to get the new script? Not yet. But still knowing there’s a chance to revisit the series has given me a chance to time travel, back to my adolescent days of commiserating with other Harry Potter fans on message boards.