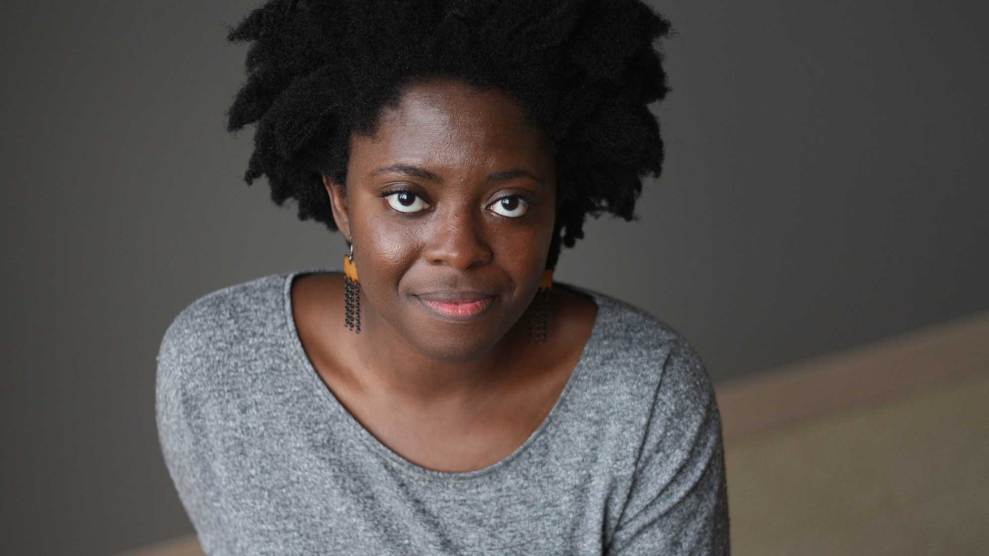 Yaa Gyasi wanted to explore what slavery meant "for Ghanaians as well as Americans."Michael Lionstar

In “The Case for Reparations,” his widely read Atlantic piece on the lingering consequences of racist housing policies, Ta-Nehisi Coates acknowledges how hard it would be to calculate the value of the “multi-century plunder of black people” in the United States, “but I believe that wrestling publicly with these questions matters as much as—if not more than—the specific answers that might be produced.”

Those seeking to expand the slavery conversation need look no further than Yaa Gyasi’s Homegoing. In this new novel, her first, Gyasi manages to fit the many stages of that historic plunder into a relatively slim volume, to dazzling and often devastating effect.

Gyasi grew up lonely in Huntsville, Alabama, where “we were the only Ghanaian family for miles and miles.”

As we sit in a hotel lobby adjoining San Francisco’s Museum of the African Diaspora on a recent afternoon, 26-year-old Gyasi’s wide-set eyes and elegant updo seem to magnify her small frame. When she set out to write about slavery’s imprint on contemporary life, Gyasi told me, she “didn’t want it to be some kind of feel-good, redemptive thing about how everything’s gotten better. I wanted it to be very clear how we ended up in this present situation.”

Easier said than done for a wordsmith who at the time had no published work to her name. But her ambitious novel—which follows seven generations across two continents—sparked a bidding war and landed her a seven-figure contract just one year after her she graduated from the Iowa Writer’s Workshop with a draft of the manuscript in hand. (Advance reviews—mostly positive—have appeared in The New Yorker, the New York Times, and the Wall Street Journal.)

Born in Ghana, Gyasi moved to the United States at the age of two as her father pursued tenure as a professor of French and literature. She grew up shy and lonely in Huntsville, Alabama, where “we were the only Ghanaian family for miles and miles.”

Not only were there no other African immigrants, but the schools were still largely segregated, and Gyasi was often the only black kid in her classes. The teachers could have used “some sensitivity training,” she recalls, citing one in particular who would pretend to be a slave master and force students to debate him on slavery’s merits: “My older brother had had this teacher, and he was like, ‘Just don’t say anything. Just sit there. ‘Cuz you’re going to get so mad.'”

Reading Toni Morrison “was kind of like the tipping point” in Gyasi’s understanding “that black women do this work and do it well.”

The library, Gyasi says, became “my place.” A place where she could revel in the works of Charles Dickens and George Eliot. At 17, she came across her first Toni Morrison novel, Song of Solomon. “It was kind of like the tipping point for me in terms of understanding that I could be a writer—that black women do this work and do it well.”

A few years later, while attending Stanford, Gyasi won a grant to travel to Ghana and develop her book idea. One day, she and a visiting friend toured the Cape Coast Castle, one of a series of commercial slavery forts Europeans had built along the Gold Coast. The tour guide awakened her to historical details her teachers hadn’t mentioned. For example, British soldiers married local women, and their children, sent to England for an education, would later return to form an elite class. This got Gyasi thinking about the involvement of the African diaspora in the slave trade, and “what it meant for Ghanaians as well as Americans.”

Homegoing follows a pair of extended families on both sides of the Atlantic. Effia, a Ghanaian woman married to a British slave trader and living in a castle on Ghana’s coast, wonders about the newfound “need to call this thing ‘good’ and this thing ‘bad,’ this thing ‘white’ and this thing ‘black.'” In her village, “everything was everything. Everything bore the weight of everything else.”

Effia is unaware that her half-sister Esi is detained in the dungeon of the very same castle, where women stacked in tight bunks await the ships that will cart them off to America as slaves. Held captive, and up to her ankles in human waste, Esi tries not to think of her former life: “Hell was a place of remembering, each beautiful moment passed through the mind’s eye until it fell to the ground like rotten mango, perfectly useless, uselessly perfect.”

“She does not excuse. And she does not romanticize,” Ta-Nehisi Coates wrote of Gyasi’s book.

Over the next three centuries, Effia’s descendants struggle with colonization, religious turmoil, and tribal warfare between the Fante and Ashanti regions. (Gyasi’s mother and father are Fante and Ashanti.) Esi ends up in the American South, and the characters in her lineage see their families torn apart by Jim Crow, the Great Migration, segregation, racism, and addiction.

Coates was an early booster of Homegoing, writing of Gyasi: “She does not excuse. And she does not romanticize.” The Africans who sold their own countrymen come under Gyasi’s scrutiny, as do the derelict fathers who lose track of their own children centuries later. Coates commends Gyasi’s characters for being “so fully realized, so elegantly carved.” Yet sometimes, Coates wrote, he found himself “longing to hear more.”

Indeed, the ambition of Gyasi’s book—its intimate, polished moments strewn like beads across a huge swath of history—is also a weakness that prevents the reader from fully identifying with a single character. Despite that perhaps inevitable flaw, Homegoing is well worth the read. At some point, Gyasi says, “I just realized that this book was about being able to look at something move and change over a very long period of time. I felt like I had to touch on every generation.”