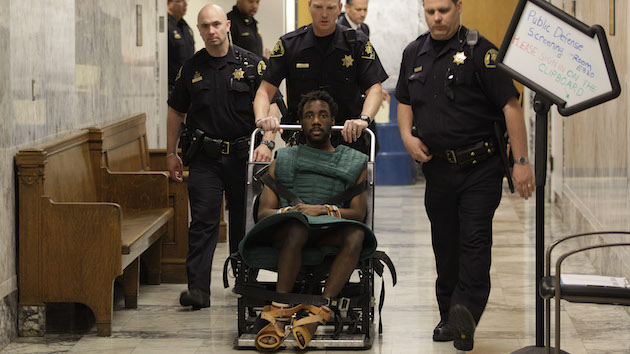 Accused rapist and murderer Isaiah Kalebu is taken in a wheeled restraint chair through a hallway at the King County Courthouse in May 2011.<a href="http://www.apimages.com/metadata/Index/Seattle-Stabbings-Trial/74cefaa96f89429a929a11602e4fb9f7/5/0">Ted S. Warren</a>/AP

In July 2009, a horrific crime shook Seattle’s South Park neighborhood: A man with a knife climbed through an open window into the home of Teresa Butz and Jennifer Hopper early one morning and proceeded to torture, rape, and repeatedly stab them both. Hopper survived the attack; Butz did not. Soon after, police arrested Isaiah Kalebu, a 23-year-old with a history of mental illness and intellectual disability. Kalebu was convicted in the summer of 2011 and given a life sentence.

Journalist Eli Sanders has followed the story since the attack with a series of features for The Stranger, the Seattle alt-weekly where he’s an associate editor. In 2012, he won a Pulitzer Prize for his deeply empathetic narrative about Hopper’s testimony at trial, “The Bravest Woman in Seattle.” Now Sanders has compiled and expanded his reporting into a book, While the City Slept: A Love Lost to Violence and a Young Man’s Descent Into Madness, released Tuesday by Viking. More than just a true crime story, While the City Slept is a compassionate tribute to the lives of the victims, and a rigorous accounting of the mental-health and criminal-justice systems that failed Kalebu and his victims in the years leading up to the crime.

We spoke to Sanders about his reporting process, the origins of the crime, and the need for mental-health-system reform:

Mother Jones: How did you begin your reporting?

Eli Sanders: The crime occurred early on a Sunday morning, and we heard about it at The Stranger not long after. I was sent out to South Park to see what was going on. It was clear that something really awful had happened, but it was not clear what exactly motivated it. In many senses, it remains not very clear.

I ended up doing a feature about the neighborhood processing this crime, and the trauma of being proximate to a crime like this. As I was writing that report, the manhunt for the person who did this was underway, and Isaiah Kalebu ended up being arrested and charged with a crime just as i was finishing that piece. So, after that, I began another feature. For this one, I wanted to see what I could learn about the man who had been arrested for the crime. Even then, I could see there were some cracks that he had slipped through in the criminal-justice and mental-health system in Washington state.

MJ: At what point did it become clear that this would become a different, deeper story than what you’d written before?

“It was instantly clear that this was an incredible act of bravery, of bearing witness, of following through on a promise she had made to herself and to Teresa.”

ES: I had gone to the courthouse to watch the trial when I could, not knowing if I would write anything about it at all. When I experienced [Jennifer Hopper’s] testimony, that was the moment. It was instantly clear that this was an incredible act of bravery, of bearing witness, of following through on a promise she had made to herself and to Teresa. And an incredible recounting of their love and what was lost. It compelled a response. At that point I felt that there was more could be told about this intersection of lives. And I didn’t really figure out what it was—what that larger story—for a bit longer.

MJ: The book follows Hopper, Butz, and Kalebu through most of their lives, starting with childhood. Why did you decide to go so far into the personal histories of your subjects?

ES: I had been writing as a journalist in Seattle since 1999, and I had written a lot about different crimes. But for me, it was never satisfying. I would write about a crime, and even when I went into some depth, I would feel that there was a lot more there. The crime does not begin at the moment that we hear about it, and it does not end at the moment of a guilty verdict. The causes, so to speak, are really not something you can comprehend quickly. So I thought, “What would happen if I stayed with a crime long enough to create as full a picture as possible?”

MJ: There’s a moment in the book, during jury selection, when one of the trial attorneys asks potential jurors whether they would need to know why the crime took place in order to convict Kalebu. Were you looking back at their lives for an answer to that question?

ES: There’s no culpability for the crime in the paths that Jennifer and Teresa traveled. Their paths have their own wide tributaries, and I thought they were interesting, inspiring, and also a reminder that victims of crimes are not one-dimensional. We often have a one-dimensional sympathy for them: “Oh that’s terrible.” It is terrible. But it’s actually more than just that. It is a disruption of a long path of an individual’s triumphs and failures and heartbreaks, loneliness, and overcoming that loneliness—and finally, for Jennifer and Teresa, finding each other despite a lot of odds. And then winding up, due to their own choices and forced beyond their control, in a house that they shared and loved, in a relationship that they loved, together, in South Park.

Yes, Isaiah’s path is traced with hope of understanding more deeply where his actions may have come from, but also with the hope of trying to understand him, to the extent that that can be done

MJ: Do you think you found those answers?

ES: It’s really for the reader to judge. I’m not a psychiatrist, I’m not a sociologist—I’m a journalist. I don’t think anyone has the answers as to where exactly your actions come from. And so I hope that this shows an interplay, a convergence, and at the same time, an absence of resistance or helpful intervention in Isaiah Kalebu’s life at moments when he really needed it. He’s someone who came out of difficult circumstances as a child. But as a young adult and as an adult, he was in and out of the criminal-justice and mental-health systems for years before this crime occurred. It’s easier to show with clarity what was not done at moments when something different being done could have made a big difference.

“It would be a terrible mistake to say that because one individual who struggles with mental illness committed a crime, all mentally ill people are dangerous.”

ES: It’s something that I’ve thought about. The vast majority of people who could describe themselves as mentally ill are nonviolent. There is—as there is in any community—a small percentage with violent tendencies, and I think Isaiah Kalebu falls into that subset. But it would be a terrible mistake to say that because one individual who struggles with mental illness committed a crime, all mentally ill people are dangerous. That kind of stigma is exactly what people who are in mental-health advocacy have been trying to push the culture away from.

However, there’s an opportunity in a crime like this to see in very stark relief the terrible and extreme consequences of our failure to construct a public mental-health system that is sufficient for the needs of our citizens. That’s not to say that every person who needs something from that public mental-health system is like Isaiah Kalebu. But his case can show very starkly how fragile and how flawed the system is.

MJ: What did you see as root failures in the mental-health and criminal-justice systems?

ES: These systems fail for lack of public investment in a state that you might think would have a stronger social safety net. Actually, it’s not so much different than other states where you might expect the social safety net to be in tatters. It really is a microcosm of the whole country, especially in the period described—the financial crisis, the recession afterward, when programs that could help people like Isaiah Kalebu were cut and cut and cut.

MJ: Have you seen any progress?

ES: Some. But it’s not nearly sufficient to the scale of the need. It’s connected, I think, to the economic recovery, to a slightly increased awareness that we cannot simultaneously to expect taxes to be perpetually cut and to demand more of government. Sadly, in our politics, so much moves around cost. If we can get the sense that so often, it is so much more expensive not to invest in preventative measures, then it would be a huge change in mindset. The downstream effects of that change in mindset would be transformative for individuals and communities. But it’s a really hard sell for a politician. The average person will say, “Oh, you’re always asking for more money.” When it really works, you can’t see what it prevented from happening.