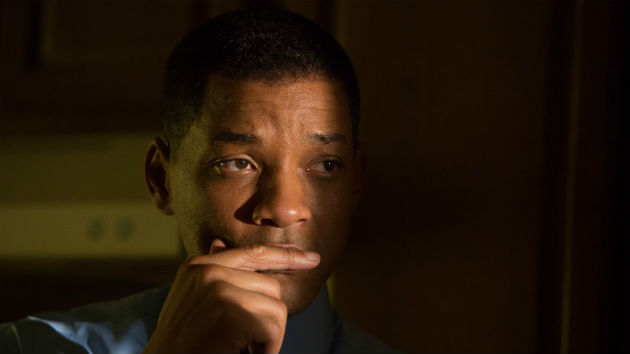 In September 2002, Dr. Bennet Omalu of the Allegheny County coroner’s office examined the brain of a 50-year-old man who’d died of heart failure. The man was Mike Webster, a former Pittsburgh Steelers center and Hall of Famer who spent his final days spiraling into mental and physical decline.  At first, Webster’s brain appeared normal. But upon further review, Omalu concluded that Webster had suffered brain damage as a result of repeated hits to the head over the course of his professional career—a finding that raised questions about the long-term effects of playing football. Omalu thought his research would prompt action from the National Football League to address the problem. But, as he later said, he had been “naive.”

Director Peter Landesman focuses on Omalu’s years-long fight against the NFL in his new film, Concussion, which is based on a 2009 GQ article by Jeanne Marie Laskas and stars Will Smith as the Nigerian-born neuropathologist. Long before the much-anticipated film’s Christmas release, it encountered its own share of criticism: In September, five months after WikiLeaks published more than 170,000 Sony emails, the New York Times reported that Sony Pictures Entertainment had “altered” the film to deflect possible challenges from the NFL. And on Wednesday, the family of former Chicago Bears star Dave Duerson, who shot himself in the chest in 2011 and was later found to have chronic traumatic encephalopathy, or CTE, criticized the film for its portrayal of Duerson.

In the run-up to Concussion‘s release, we spoke with Landesman about David and Goliath stories, his past as an investigative reporter, and how NFL veterans have reacted to the film.

Mother Jones: Why did you chose Bennet Omalu’s story as the lens through which to look at the concussion debate in the NFL?

Peter Landesman: Well, that’s like asking why choose Woodward and Bernstein to look at Watergate. Bennet was the one who broke through the wall. Until Bennet Omalu came around, the NFL had knowingly covered up what it knew about dangerous concussions, and Bennet unwittingly discovered this disease and gave it a name and became undeniable. Just in terms of the thriller of a story, their successful attempt to destroy him until this movie came around made him a perfect character to ride emotionally through the tale. The discovery to cover up the vindication, the triumph—he was the perfect vehicle to tell this story.

MJ: You once described Omalu’s story as a David and Goliath story.

PL: [Laughs.] It’s almost the definition of a David versus Goliath story. Look, it’s one man against the system, one man against the machine. He’s taking on one of the most powerful not just sports institutions, one of the most powerful corporate institutions on planet Earth by himself, a foreigner, in Pittsburgh. If you want to take the David versus Goliath metaphor, he’s got a pebble in his hand and he’s up against an enormous giant, and all he has is the truth and science on his side.

MJ: Initially, Omalu wasn’t just against the NFL, but because he was breaking new ground, he was up against the scientific community too.

PL: Yeah, he was going up against scientists who were lying on behalf of the NFL. He had science on his side. He had scientists on his side, but the NFL had on their payroll a number of doctors who were just paid to say the game was safe. So in that way, he was up against the scientific community…As a storyteller, I was attracted to the power of this story. It also seemed incredibly timely. This whole issue has become a zeitgeist. The issue is on the front page of newspapers—famous football players are dying and committing suicide. To me, this was an undeniable story that had to get told. There was an imperative to it that I answered.

MJ: How much of Omalu’s story could you personally relate to?

PL: Quite a bit. When I was a journalist for the New York Times Magazine, I had written a groundbreaking exposé about sex trafficking and sex slavery in the United States. It was the first one of its kind. I was the first one to discover sex slavery in this country, and I was accused of fraud, just like Bennet was. I was accused of having made it up. I was accused by my fellow colleagues, other journalists, and the accusations were similarly fraudulent. But I had to fight them, and it was very, very debilitating, personally high costs, professionally high costs. And then I really lost my faith in human nature for a long stretch of time. I lost faith that telling the truth was enough, so that experience was completely parallel to Bennet’s.

MJ: How much did you work with Omalu?

PL: I talked to Bennet for days to research and write the screenplay, and then when Will stepped into the role, he and I met with Bennet quite a bit. And then he interacted with Bennet quite a bit independently. We both went to some autopsies that Bennet did. Will and I spent time around his family. Will then reached out to Bennet solitarily and talked about the business of being a forensic pathologist and the business of being Bennet.

MJ: How much did you then work with Will Smith in developing him into Omalu? Could you describe that relationship?

PL: Well, I’m the director of the movie, so a lot. [Laughs.] I’m very involved in actors’ character development, and often they want to be left alone to build it from within, and then they bring it to me and I adjust it, rehearse it, and refine it. You know, actors only know their parts in the play. They don’t have a sense of the whole, so the director needs to take what actors bring and mold it into a tapestry that makes sense for the entire film. Will and I worked in lockstep for months on his accent, on his performance, on the script. We rehearsed for weeks. We were very, very in sync.

MJ: One of the striking things about the film is how you depicted the retired players, particularly Dave Duerson. I got the sense that these retired players were aggressive. What led you to these types of depictions?

“CTE makes men violent and sometimes exhibit sociopathic behavior—memory loss, dementia, violence. They self-medicate with drugs and alcohol. So the depiction of the former players in the movie is an accurate representation of people that come down with CTE.”

PL: Well, they were victims of this disease, and they were sick. CTE makes men violent and sometimes exhibit sociopathic behavior—memory loss, dementia, violence. They self-medicate with drugs and alcohol. So the depiction of the former players in the movie is an accurate representation of people that come down with CTE.

MJ: How did you study those roles and make sure that was an accurate depiction?

PL: In the case of Justin Strzelczyk, for instance, I got to know his widow very well and his children and sat down with them and listen to their stories about what happened to him over time. In the case of Mike Webster, there’s a lot written about him already that was in the public domain. Same with the others. If I didn’t sit down and speak with the families—and I spoke with a lot of them—I read about them. Dave Duerson, Andre Waters, Mike Webster—these are men who died in a very public manner…It was incumbent upon me to tell this tale accurately and not just emotionally. But it is first and foremost an emotional ride. As I said, a David versus Goliath immigrant story. I didn’t want an audience to be distracted from wondering whether this is all true. I wanted to take that off the table so they can focus on the film.

MJ: Sports Illustrated had a fascinating screening of the film with former players. What was your involvement?

PL: I showed other retired players, and they were all very emotional. The movie moves them. The players I’ve talked to who have seen the movie have been altered by the movie. I think you’re referring to one in Atlanta last week where 70 retired and current players saw the movie, and my understanding is the experience was very powerful. I haven’t heard any criticism.

MJ: Have you shown the movie to the NFL? What’s that relationship like?

PL: No. There is no relationship. I haven’t shown the movie to the NFL. They could see it on Christmas Day. We’re not looking for their approval. We made a movie we’re proud of.