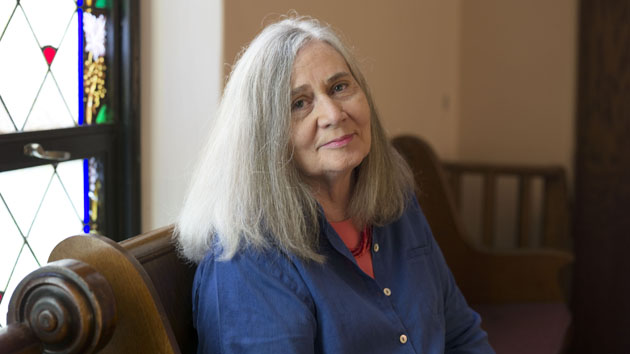 “Unfashionable” is a word that Marilynne Robinson has used to describe herself, but the world appears to disagree.

The “self-declared Calvinist from northern Idaho” has been held up as one of the most iconic writers of our time, with an uncommon gift for finding the sacred in the everyday. Her fans include President Obama, who recently sat down with the author in Des Moines for an expansive interview in the New York Review of Books.

Robinson published Housekeeping, her first novel, in 1980, and for most of the years since she has taught at the Iowa Writer’s Workshop. She describes the process of writing a novel as though it were a forming star—a nebulous voice that comes to her on its own accord and gradually gains shape, accumulating narrative heft. Recently, those voices have called out from a fictional, mid-century town in Iowa called Gilead, resulting in an award-winning trilogy of novels. Gilead won the Pulitzer Prize in 2005, Home was honored with the Orange Prize in 2009, and Lila was named to the long-list (among the finalists) for the Man Booker Prize this year.

But Robinson is also the author of penetrating nonfiction that has tackled topics from the roots of her Calvinist faith to nuclear contamination. In her latest collection, The Givenness of Things, out this Tuesday, Robinson recasts John Calvin, the 16th century theologian whose doctrine is often today simplified as predestining some for heaven and others for hell, as a misunderstood scholar who saw human curiosity and inventiveness as “unmistakeable proofs of the existence of the soul.”

The new essays, like their author, evade easy categories, pairing theological arguments with sweeping critiques of brain research, Shakespearean conspiracy theories, and a broad cross section of American politics (“Those who hate Fox News are as persuaded by its representation of the country as are its truest devotees”). But those quarrels drive at a more hopeful conclusion: that grace and wonder live on in modern times. 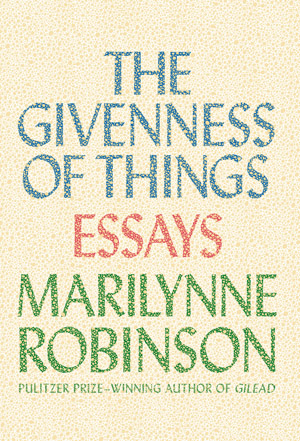 Mother Jones: You describe discovering a story by slowly finding and nurturing a voice. Does your nonfiction form that way?

Marilynne Robinson: It happens fairly often that something I hear or read strikes me as false or somehow in error. This can happen because I have information I trust that is at odds with it. Sometimes my doubt seems intuitive, but most likely it derives from an implausibility or a logical problem I may at first find difficult to identify and articulate. It is interesting to me to work through questions that arise in this way.

MJ: What led you to undertake this deep investigation of the history and literature related to your faith?

MR: Faith takes a great many forms, suited to a variety of sensibilities, and mine happens to suit me very well. So I have studied it for the pleasure of the work, and for its good effect on my mind. The classic theology of my tradition comes from the French Renaissance. Shakespeare was born in 1564, the year Calvin died, and that theology was very influential in England in his lifetime. I think Shakespeare was attentive to questions raised by it, about human nature, history, reality itself. I find the two literatures to be mutually illuminating.

MJ: While working on the essays, did you come across any surprises in Calvin’s life or work?

MR: I had been reading about Calvin for years and had been studying the English Renaissance for many more years, and it had never occurred to me to think of them together. I learned that Calvin was the most widely read writer in England in Shakespeare’s lifetime. He was translated and published in many editions. His theology emphasizes the sanctity of conscience, the sanctity of companionate marriage, and the obligation of those in power to attend to the well-being of the people in general, especially the poor. Interestingly, for the interpretation of Hamlet, for example, he forbids even the thought of revenge. This is not the Calvin of myth, but when the Elizabethans read him there was no such myth, nor would there be now, if he were read.

MJ: What are you reading now?

MR: Lately I’ve been reading in the period leading to and including the English Civil War—Edward Coke, the political writing of John Milton, Calvin’s letters to the Earl of Somerset. I just got four volumes of the letters and speeches of Oliver Cromwell. He is prominent among the great unread, and treated so oddly by history that I wanted to hear his side of things.

MJ: In the essays, you describe the civil rights era as a third great awakening that stirred both religious and civic change. Was that part of what drew you to set your novels in the 1950s?

MR: It is true that America in the moments just before that era began interests me a great deal. It seems we are always about to realize again how much the complacencies of the majority culture have hidden from them. Now the issues of policing and incarceration have arisen, very grave issues that somehow are only recently acknowledged. Thank God these awakenings come, though it is grievous thing that they are always necessary. There is a mystery in this pattern of self-deception, then shock. It has everything to do with the moral competence of society, which we are generally much too ready to assume and rely on.

MJ: As I read about Calvin in The Givenness of Things, the children of your fiction often came to mind—their curiosity unencumbered by preconceived expectations. Lila is someone who doesn’t seem to lose this quality in adulthood. What do those perspectives bring to your work?

MR: Calvin treats experience as essentially visionary and revelatory from moment to moment, addressed to the individual perceiver, the individual soul. Where this is assumed preconceptions can only distract and obscure, though, of course, as human beings we can never wholly free ourselves of them. John Ames is acculturated by his faith to try to see given experience as visionary. Lila is very slightly acculturated and sees the world quite directly. Their worlds meet. I believe that reality is vastly richer than the cursory attention we usually give it permits us to understand. I like to write through a consciousness that allows me to suggest something of this richness.

“Concepts like quotidian and humdrum prevented me for years from really absorbing the miraculous strangeness of bombing around a star on a tottering planet.”

MJ: In that vein, you’ve lived in Iowa City for 25 years and your recent novels have offered an intimate portrait of a single community. You don’t appear to be in a rush to pack up and move on from places, in life or in literature.

MR: I do assume that a character or a place is inexhaustible and will always reward further attention. In the nature of things, limitation is a strategy of thought, not a property of anything real. It seems there may be vast complexity within, so to speak, subatomic particles. Limitation is a good discipline because it discourages inappropriate generalization, which distracts attention from the profound, particular complexity that characterizes anything at all.

MJ: Given that perspective, and because you’ve been critical of media coverage and oversaturation of information in the past, it’s surprising that you seem warm to the potential of the internet in your essays. Where does your optimism come from?

MR: I don’t think I would worry about an oversaturation of information if it was indeed information. It is the slovenly, hasty traffic in cliché and sensationalism and bad reasoning that bothers me. I love finding arcane primary texts on the web. The people who think to put them up are heroes of mine. The accessibility and effective immortality of actual information is a magnificent phenomenon, a beautiful extension of human consciousness. It is too bad people find so many ways to abuse the internet, but that’s just how things are.

MJ: In your essay on realism from The Givenness of Things you write, “I wish that I had experienced my earthly life more deeply.” That’s a surprising, humbling admission. What do you mean by it?

MR: I think I am like most people in letting myself worry about things that didn’t matter. Concepts like quotidian and humdrum prevented me for years from really absorbing the miraculous strangeness of bombing around a star on a tottering planet, of watching the world unfold in time. I’m amazed at what I have taken for granted. How to truly take in our situation I don’t know, but I wish I had started asking myself that question earlier than I did.

MJ: You’ve said we can expect a return to Gilead in the future. Can you say what you have in the works?

MR: Is it haunting my mind? Yes. Have I written a few pages? Yes. Does this mean that it is in the works? We’ll see.