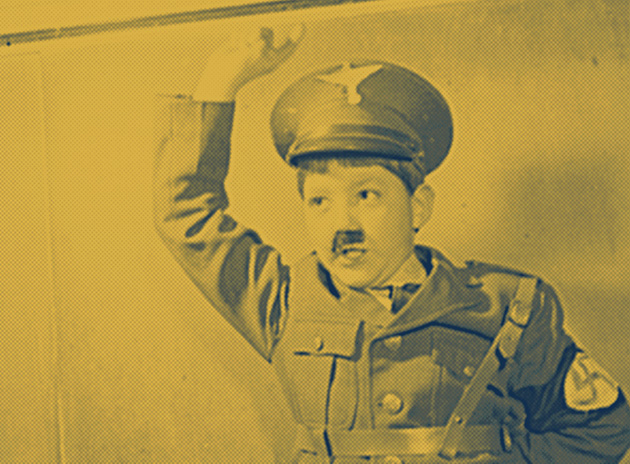 This morning, the New York Times Magazine tweeted the results of a survey of readers who were asked if they could bring themselves to kill the baby Adolf Hitler. Forty-two percent said they could off the future Führer, 30 percent declined, and 28 percent said they were unsure.

The ensuing Twitter explosion reminded me of Gavriel Rosenfeld’s The World Hitler Never Made: Alternate History and the Memory of Nazism, a fascinatingly comprehensive look at pop culture’s obsession with counterfactual Hitler storylines, including the scenario with the time machine and baby Hitler. Rosenfeld is a professor of history at Fairfield University and the author of the recent book, Hi Hitler! How the Nazi Past is Being Normalized in Contemporary Culture. He also writes about counterfactual history, the study of “what if” events and their consequences.

Rosenfeld, who is not on Twitter, was blissfully unaware of the latest baby Hitler hubbub. But he kindly agreed to talk about why we never get sick of Hitler assassination fantasies and why Nazi references keep popping up in our political discussions.

Mother Jones: When did people start floating this hypothetical idea of, “Hey, if only we could go back in time and kill Hitler, everything would be different”?

Gavriel Rosenfeld: Of course, the notion of killing Hitler and improving history goes back to World War II itself. The idea of going back in time and killing Hitler as a baby is less frequently explored than exploring the possibility of whether Hitler had been assassinated successfully in real life. But what’s interesting is that when you get into the post-war period, many of the narratives in books and movies conclude that if you killed Hitler, you’re actually going to make history worse. So I’m surprised that 42 percent [in the Times Magazine survey] said they would kill Hitler as a baby. Of the 58 who said they wouldn’t do it, maybe they realize they wouldn’t make history better or they’re just ethically opposed to killing babies. And these are all Americans?

MJ: I don’t know, but I assume they are. They didn’t release any demographic info.

GR: The answers that you get to this question vary quite a bit by nation. British and Americans almost always say that you would make history worse, while German respondents are far and away inclined to say, of course, if you get rid of Hitler you make everything better. And the reason is that the Germans tend to like to blame the Nazi experience on one man who can be scapegoated. If you pile all the blame onto him, you exonerate the German masses from any responsibility. Whereas Americans and British respondents don’t want to let the German people off the hook. They make the case that if you get rid of Hitler, some other leader apart from Hitler would have emerged and, because of the structural constant of German nationalism, would have exploited German national feeling and produce the same kind of events no matter what.

Originally the premise of killing Hitler was fueled by deep traumatic feelings of wishing and fantasizing that if only things had been different, we could have spared ourselves all kinds of suffering. More recently it’s been turned into a comedic trope. As we go forward, tragedy plus time equals comedy, and that is what we’re seeing now.

MJ: In The World Hitler Never Made, you wrote about several books and shows that dealt with the scenario of killing baby Hitler. Do you have a favorite?

GR: My favorite, I suppose, is the British comedian and writer Stephen Fry’s novel Making History. It’s about a grad student in Cambridge who decides not so much to murder Hitler but to prevent him from being born by sending, though a time machine, some birth control pills to the well where his mother was fetching water. By that process, his father, Alois Hitler, becomes sterile and Hitler is never born. That leads to a worse Nazi dictator emerging, a fictional guy named Rudolf Gloder. He’s much more rational than Hitler and he gets nuclear weapons and wreaks havoc around the world. He defeats the Soviet Union so there is no Cold War, but there is a cold war between the US and Nazi Germany. The irony is that the grad student then has to go back in time to make sure Hitler is born.

MJ: This baby Hitler moment follows Ben Carson saying the Holocaust could have been prevented if the Jews had been armed and Binyamin Netanyahu saying Hitler got the idea for the Holocaust from the Grand Mufti of Jerusalem. Why do people keep trying to rewrite the history of Nazism and the Holocaust?

GR: We are in a “what if?” moment. In times of uncertainty, we tend to move away from deterministic world views. And when we try to find moral footing for our actions, we compare ourselves to the foil of all foils, the Nazi period. It’s a quest for moral certainty by saying, “Even if we’re not doing great these days, at least we’re not the Third Reich.” Which can be consoling or alarmist. There’s always a present-day agenda behind it.

MJ: As a historian, do you see any good coming from these counterfactuals? Do they result in more people learning the history?

GR: I feel mixed about it. It’s the same as climate change deniers who force scientists to waste their time having to refute nonsensical ideas. On the other hand, it does bring to public attention things that people might not understand. Counterfactual claims make awesome headlines. The first step to get people interested in history is to wonder how things could have been different. Most people experience history as one damn fact after another in high school. But if you can wonder, “Wow, what if the US hadn’t gotten involved in World War II?”, you can become enthralled by the imaginary possibilities. Maybe that’s a way of getting the spoonful of sugar to help the medicine go down. And it’s why Hitler has become a meme. If you’re a website and you want to get attention, you can Hiterlize anything.

MJ: So if you could go back in time and kill baby Hitler, would you?

GR: I would be very tempted, but I wouldn’t have been born if World War II had never happened, which was caused by Adolf Hitler. My mother emigrated from Eastern Europe to America as a result of World War II. So for personal reasons, I would be a little hesitant. But far more broadly, what I have learned from studying counterfactual history is that the law of unintended consequences always kicks in no matter how secure you are in your plan. We have to live with the historical record as it is, like it or not.