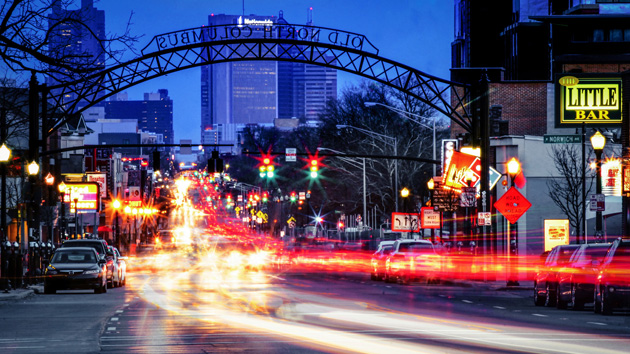 Brooke Wojdynski, a 25-year-old native Californian, grew up in San Diego and attended college in San Francisco—two cities most people would be loath to leave. Five years ago, as she was pursuing a BA in political science, she knew her employment prospects in California were bleak but couldn’t imagine any other options. Just as she was pondering her next move, she traveled to the Columbus area for a friend’s wedding.

Wojdynski didn’t know much about the Ohio capital. She recalls wondering, “Do they even have tall buildings there?” But after exploring the leafy city, she fell in love with its distinct neighborhoods, the spacious Midwestern landscape, and the campus life of the Ohio State University. She moved to Columbus two months later, finished school at Ohio State in 2012, and got a job working for the Ohio Democratic Party.

Educated, ambitious millennials like Wojdynski are exactly the kinds of people officials at the Columbus Convention and Visitors’ Bureau have targeted in their “Life in Cbus” campaign. New York, San Francisco, and Washington, DC, have always been crowded with young people eager to launch their adult lives, but increasingly, cities in the Midwest and South are making creative attempts to lure millennials.

Savvy boosters have tried to rebrand the less-glamorous corners of America for over a decade. In 2004, Jennifer Granholm, then the governor of Michigan, launched a statewide campaign to rehabilitate the image of her state’s struggling cities and make them “cool.” The effort was ridiculed by the media and dismissed as a failure, but many of the places Granholm had targeted—Detroit, for example, or Grand Rapids—boast burgeoning arts and nightlife scenes. More recently, cities such as Philadelphia have touted affordability in ad campaigns. Philly’s tourism office placed a giant banner in New York’s Penn Station declaring, “Dear $18 cocktail, down here we call you ‘two cocktails.'” Even South Dakota has gotten in the game with an offbeat ad campaign. Riffing on the one-way journey to Mars project, the ad says: “Progressive. Productive. And abundant in oxygen. Why die on Mars when you can live in South Dakota?”

The Columbus Visitors Bureau is trying a new approach for turning around the city’s image. Instead of hoping for the best when someone visits, or relying on corporate recruitment to bring in residents, officials have embarked on an aggressive advertising and social-media campaign, targeting millennials in the very cities in which they congregate. Their challenge? Establishing a compelling brand for a city that doesn’t really have one.

In 2014, the visitors’ bureau launched a website filled with Columbusites‘ social-media posts, and placed ads in cities with large millennial populations. Young commuters stuck in the DC Metro or on crowded Chicago highways saw warmly filtered collages of Instagram-culled images from Columbus—bikes, craft beer, friendly dudes with beards. By deploying twentysomethings’ positive visual triggers, Columbus seeks to replace its bland, white-bread image with that of a relaxed, hip, and cost-efficient alternative. 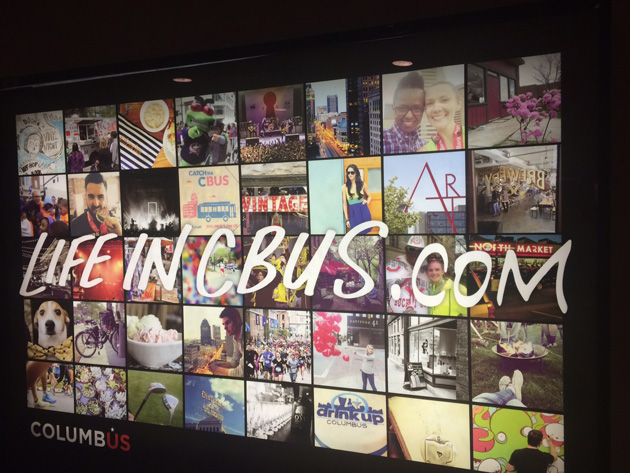 An ad for Columbus in Washington, DC.

“Columbus: Where cost of living is more living than cost,” proclaims one ad. For “young transitionals” burdened by student debt and expensive magnet cities, the city’s affordability could be one of its major attractions. But Amy Tillinghast, the official spearheading the campaign, has zeroed in on Columbus’ main problem, and it’s not affordability. In a world of exotic gelato, the city is vanilla ice cream. The visitors’ bureau has done research on national perceptions of the city, and “there’s not one thing about it that sticks in folks’ minds,” Tillinghast says. Without any nationally known landmarks or museums, a defining industry, a big-time professional baseball or football team, many Americans know little about “The Biggest Small Town in America.”

The number of young Washingtonians and Chicagoans who migrate to Columbus will probably be negligible, says Rolf Pendall, an urban demographics expert at the Urban Institute. But that may not matter. The campaign could be a broader pitch, Pendall says, “to market Columbus as a place where youth is happening, and therefore worthy of investment” by business. “If you have a city worthy of marketing to that demographic, that says something in and of itself.”

So far, the Washington, DC, ad campaigns have been spared ridicule by local media. However, the blog of the DC Office of Revenue Analysis pushed back against the notion that Columbus is a much cheaper alternative to the District. “Living in Columbus isn’t going to save a typical millennial as much as you might expect,” writes Ginger Moored, a DC official. She points out that while housing is much cheaper in Columbus (median monthly rent for a one-bedroom apartment: $670) than in DC ($2,000), millennial salaries in DC are on average almost $20,000 higher.

Factor in high home prices and price of raising children, however, and the calculus changes. “DC millennials might not be considering a move to Columbus now,” Moored acknowledges. “But in several years they might rethink the numbers.”

Other Ohio cities—Cleveland, Dayton, Akron—were economically devastated by the recession and are only now slowly recovering. But thanks to a large pool of government jobs, a high number of Fortune 500 companies, and the massive Ohio State University, Columbus weathered the downturn relatively easily. Even now, Columbus’ unemployment rate of 3.5 percent is less than half that of Cleveland.

Ultimately, the success of Columbus’ effort may not be clear for another decade. But if the slick branding and social media attracts visitors, businesses, and future residents, the city will set a powerful example. No other city has tried as explicitly to woo young people with the kinds of communication they use every day. Des Moines and Indianapolis, as well as smaller towns experiencing population loss could employ a similar approach to lure twentysomethings, notes the Urban Institute’s Pendall.

Brooke Wojdynski, the recent transplant, now lives in a spacious house in the Short North neighborhood, and enjoys her work in city politics. She just convinced her boyfriend to move from Los Angeles, and he’s still shocked by how cheap Columbus is. She may be part of a growing trend. The city of 820,000 is projected to add 500,000 residents by 2050, making it more populous than top-tier cities like Boston and San Francisco. “We need the branding of Atlanta, Boston, Nashville,” she says. “What’s holding us back?”