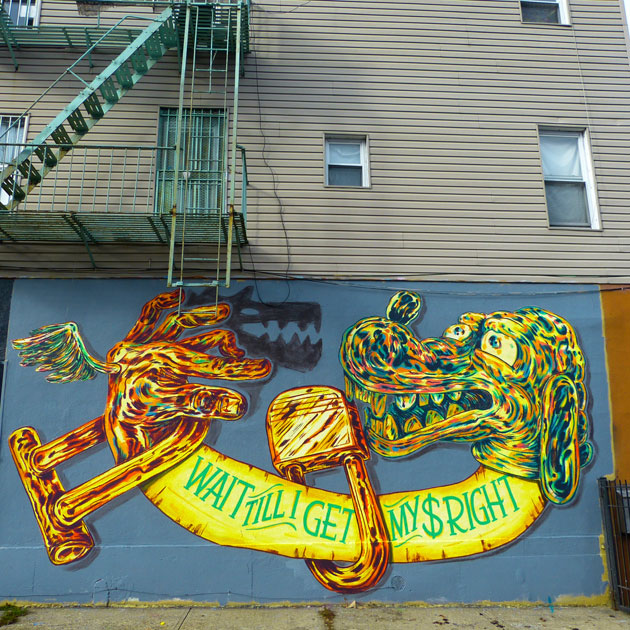 NDA’s work is “fantastic and gruesome,” Litvin writes. All photos from “Outdoor Gallery,” by Yoav Litvin.

Yankees caps, tattooed children, cartoonish women, men riding lions, Nazis in gas masks, dragons in hats: All of these figures decorate the buildings of New York City, and photographer Yoav Litvin’s new book, Outdoor Gallery, is the fulfillment of his mission to bring their vibrant shapes, colors, and lines to a larger public audience. “I learned a visual language spoken by a thriving community of artists that interact with each other, their environment, and a diverse public,” Litvin writes on what inspired his glossy tome on Big Apple street art. 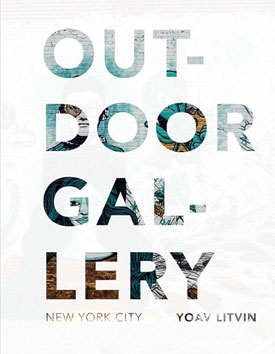 Yoav Litvin, a New York-based writer and science researcher at Rockefeller University, started taking photographs of street art two years ago when he was recovering from a rugby injury. After the ill-fated match, Litvin was left to walking for exercise. The daily walks turned into a project to document what he saw–art work that most New Yorkers typically breeze by without much notice. Before that, he spent years studying the brain and later giving talks on “progressive, creative, and nonviolent causes.” His talents, creativity and attention to detail elevate his photographs and give him a platform to explore the racial, social, and political conversations going on between artists and their communities.

Many of the New York City’s graffiti artists, according to Litvin’s book, started around the age of 10, and thrive on the city’s culture of free expression. Litvin’s book captures the lives and work of 46  artists, whose reasons for painting and backgrounds often diverge, despite their commitment to working with a freedom and openness that’s seldom possible in stuffy indoor galleries. “It seemed like the natural place for art to be,” says Chris Stain, whose portrait of a woman with her young children appears on Brooklyn’s Lafayette Avenue—some of the “common people” he so often paints. Stain tells Litvin he’s been arrested, threatened, and nearly provoked into fistfights during his work sessions. But that’s all part of the process, and the thrill: “There is more drama on TV than what I have to offer.” Now he’s working on a degree in arts education, so he can teach as he continues to paint.

Many of the artistic messages are familiar: give peace a chance, women are treated like objects, death is inevitable. The subjects of race, social struggle, and politics often go hand in hand with the rebellious nature of painting illegally. It’s the variety and personality, the crazy and the unique, in Litvin’s portraits that make his book special: Each artist has a distinctive voice and style. They help shift the graffiti dynamic away from mere vandalism, and become like characters in a street novel—each portrait a new chapter.

My favorites are the strange, absurd, and mystical portraits that are sufficient to make New Yorkers pause from their bustling to ponder for a few seconds. And while some of the art is in that classic bombing style consisting of colorful, jumbled letters—channeling the defiance of leaving your mark on a place—far more compelling are the odd, yet oddly cohesive, works.

Consider QRST’s portrait on Brooklyn’s Troutman Street of a a man with a ram’s head. Naked and cross-legged, he holds a lantern and a bird cage with cardinals inside, all while floating on a broad pink flower. It’s weird and thought-provoking. Why a ram? Why cardinals? Is that peace I see in the ram’s eyes, or a foreboding fortune? And why does ASTRODUB, who graced a wall in Brooklyn’s Williamsburg with a sexy, terminator-esque woman, orange skulls, pink birds, and the words “Love hurts so good” say that she “can’t really identify as a street artist?” How does NDA manage to combine cartoonish elements of children’s books—big yellow faces with pickle-sized noses, purple flowers, dogs—with macabre skulls, dragon snouts, and rap lyrics, and still inspire joy and melodic rhapsody? The book is full of mysteries. And that’s the best part.

Here are some of Litvin’s favorites: 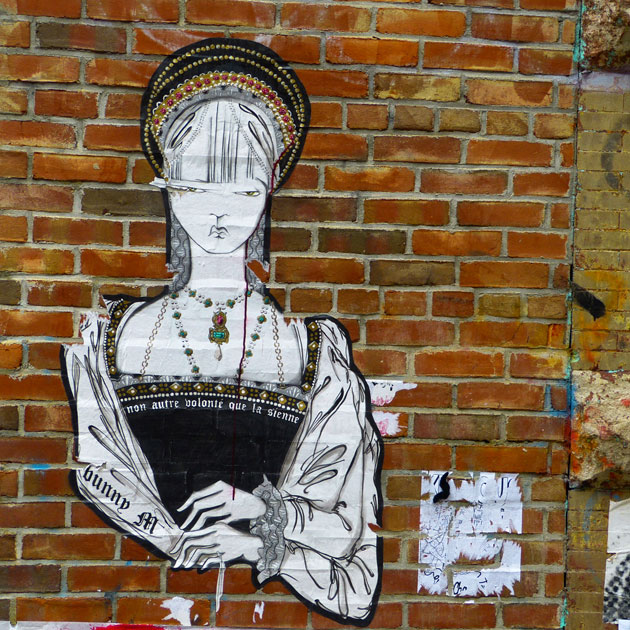 Bunny M pastes her intricate, often mythological, figures all over Brooklyn and Manhattan. 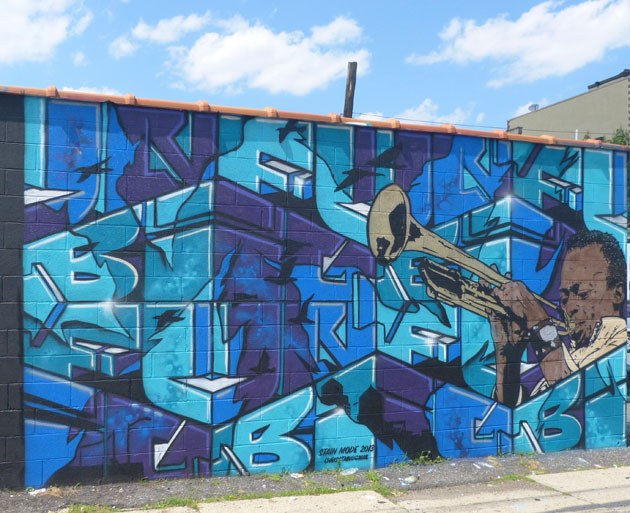 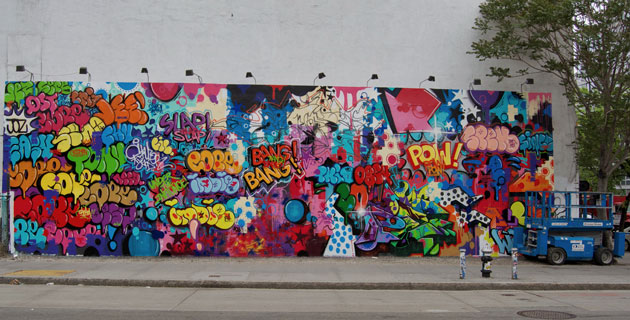 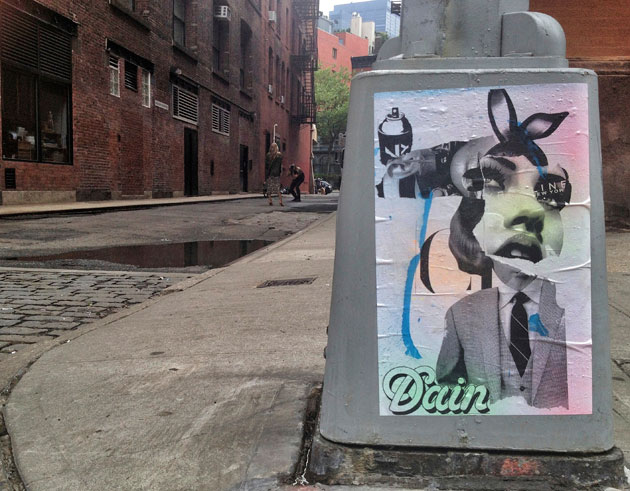 “I love this picture a lot,” Litvin says. “Here, I am serving as the photographer whereas Dain’s artwork is my model.” 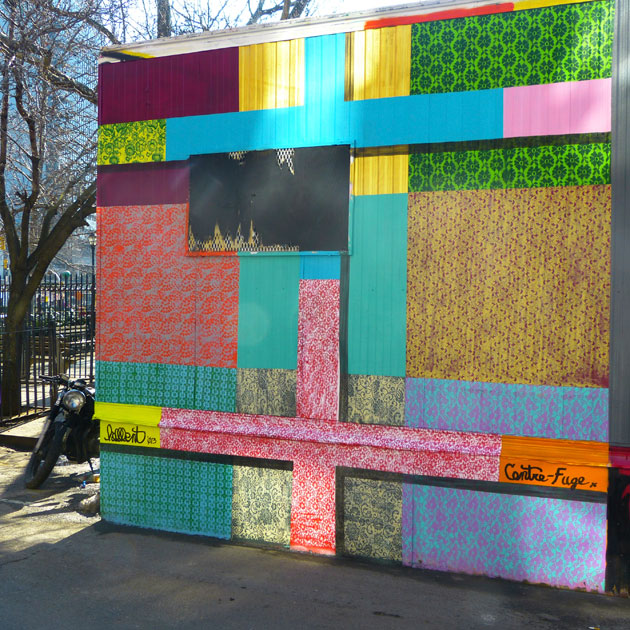 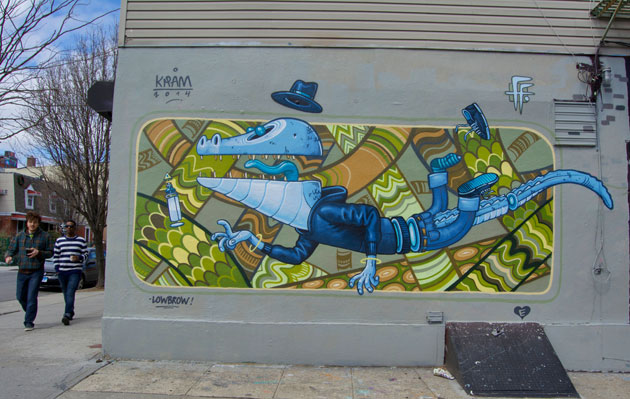 Kram, a transplant from Barcelona, combines humor and technical skill in his popular work. 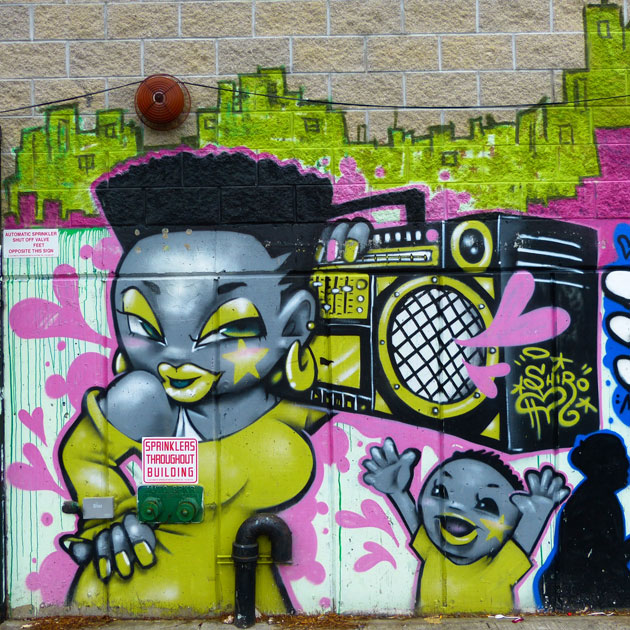 “Mimi” appears in many pieces by Shiro, which embody hip-hop and street culture.