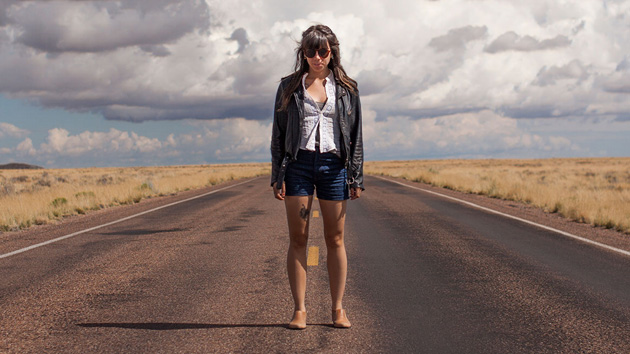 “My musical heroes always were people who used their music as some form of political protest,” says Alynda Lee Segarra. Musicians who are “thinking of the people who are shouting for a change, and use their voice to help make that happen.”

It makes sense: Segarra, the frontwoman of New Orleans folk collective Hurray for the Riff Raff, has identified with misfits and underdogs her whole life. She ran away from her home in the Bronx at 17, lost and without a plan. In what seems like something out of legend, she fell in with other young wanderers hitchhiking and train-hopping around the country, and began playing the washboard.

“I’ve experienced a lot of fear and so have all of my female friends. I was feeling a lot of rage.”

She felt home for the first time when she hit New Orleans, where she picked up the banjo and became part of the traveling Dead Man Street Orchestra and a street jazz collective called Loose Marbles. She formed Hurray For The Riff Raff in 2006, but it wasn’t until the success of its breakout 2012 album, Look Out Mama, that she found herself with a platform to create protest music of her own.

When composing the band’s 2014 album, Small Town Heroes, “I was feeling very trapped as a woman in the world,” Segarra told me. “I’ve experienced a lot of fear and so have all of my female friends. I was feeling a lot of rage.” At the time, several high-profile rape cases were in the news, including that of the 23-year-old student raped and beaten to death by six men on a Delhi bus, and the notorious Steubenville case, wherein a 16-year-old was sexually assaulted by high-school athletes while their friends laughed and took photos. She wanted to write a song “to honor them and their struggle.”

She ended up with “The Body Electric,” a haunting, feminist take on traditional murder ballads, which ends with the question: “Tell me what’s a man with a rifle in his hand/Gonna do for his daughter when it’s her turn to go?”

The band worked with the activist coalition Free Marissa Now to set the lyrics to an animated video protesting the coming trial of Marissa Alexander. A Florida woman who had given birth nine days earlier, Alexander allegedly fired a warning shot to ward off a beating by her ex-husband—she faces up to 60 years for aggravated assault.

“I originally wrote it with a really feminine perspective,” Segarra says, but began “seeing more and more connections between this song and other events,” like the killing of Mike Brown in Ferguson, Missouri, and Trayvon Martin in Sanford, Florida—the Martin case inspired another song, “Everybody Knows.”

Hurray For The Riff Raff recently reached its crowd-funding goal to produce a proper music video for “The Body Electric,” which Segarra hopes will be “very political but also very beautiful.” Any money beyond that, she says, will go to the Trayvon Martin Foundation, which advocates for families of crime victims, and to the Third Wave Fund, which supports youth-led LGBT and gender-justice work.

“It’s not always easy to go up there and be sure of yourself. Sometimes you have to pretend.”

With the exception of underground hip-hop, Segarra says, “I’ve been a little disappointed with the number of musicians who have not been making a political statement with their music. I’m not really discouraged, though—I think we’re just starting to wake up.” Musicians of her generation “grew up with the Backstreet Boys,” she adds, and if they “haven’t been in touch with music of the 1960s, it’s kind of hard to know that’s even an option.”

Although Hurray For The Riff Raff is winning new fans nearly everywhere it goes, Segarra hasn’t forgotten the insecurity and doubt of her teenage years. “It’s been a really hard road,” she says, “and it’s not always easy to go up there and be sure of yourself. Sometimes you have to pretend.” She finds encouragement in the idea that her music could inspire “a girl out there who is scared to play guitar or make music or write poetry.”

Even while writing Look Out Mama, she was still searching: “I just wrote a ton of songs, trying different styles. I had been trying to pull all different parts of who I was into songwriting, but I found myself in a lot of boxes. The box of writing really personal, really sad songs. The box of writing very stylized New Orleans street music.”

Small Town Heroes is “a step further for me as a songwriter,” she says. With songs like “The Body Electric” and “Hometown Heroes”—which she describes as “the Velvet Underground brought to a John Prine song”—she has finally found her voice. “It brings in my different influences and different backgrounds,” she says. “It’s very much who I am.”