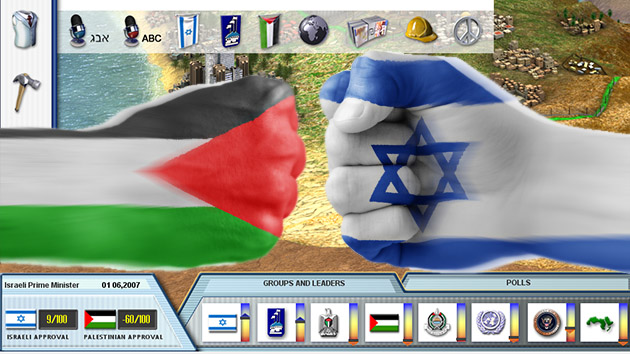 I am only 10 minutes into trying to solve the Israeli-Palestinian conflict and things are already starting to hit the fan. I am playing PeaceMaker, and I’ve taken the role of the Israeli prime minister. I channel my inner Yitzhak Rabin and take the dovish approach: I provide the Palestinians infrastructure aid and ease up on border checkpoints. My approval meters show that the United Nations can’t get enough of me—but the Israeli public is angry. Soon, Hamas carries out a suicide bombing in Tel Aviv. I order in the military into the Gaza Strip. Now everyone’s pissed at me, and I may get voted out of office. I am very frustrated.

PeaceMaker’s creators, Asi Burak and Eric Brown, are the first to admit that their computer strategy game isn’t necessarily fun—the word they use is “engaging.” PeaceMaker, released in 2007, challenges you to take the seat of either the Israeli prime minister or the president of the Palestinian Authority and to construct a virtual end to a decades-long conflict. Winning the game means achieving a peaceful, two-state solution. If you find that too simple, don’t worry—the game also has a hard mode.

In the tradition of many diplomacy and strategy games, PeaceMaker is turn-based: Make a move, and the environment responds to your choice. If, as the Israeli PM, you open up more work permits to Palestinians, your favorability ratings will rise with Palestinians and will likely decline with Israelis. Take too conciliatory an approach as the Palestinian president and your own people will get angry, but Israel will more likely to give aid or concessions down the road. Each side also faces realistic capabilities and limitations: The simulated Israel PM controls the police, army, borders, and budget, and must contend with satisfying various factions, from right-wing settlers and Palestinians to outside players like the United States and United Nations. The Palestinian Authority head has fewer tools: Beyond giving speeches and commanding the police, you’re often subject to the whims of Israel and, crucially, Hamas, which can act suddenly and must be approached carefully.

An Israeli general played PeaceMaker.
He bombed the Palestinians into submission, then wondered why he lost the game.

The gameplay is complex and realistic, which means it’s also very difficult to win. A Carnegie Mellon study on PeaceMaker found that nearly 40 percent of players couldn’t win once in four tries. Nearly half were able to win one out of four games; just 2 percent won all four tries. (The study notes that hard mode is so impossible that most players “simply gave up.”) Just when it seems you’re doing well, unexpected events can derail the best-laid plans. A Hamas suicide bomber blows himself up on an Israeli bus, or an Israel Defense Force rocket hits a Gaza school. These built-in flash points bring out the core dilemmas of each side: Balancing the desire for security and self-determination with the need for a legitimate negotiating partner on the other side. Win or lose, the ultimate goal of PeaceMaker is to get players to engage with the conflict differently. If you come to the table with your own biases, Brown and Burak want to help you see the other side.

The idea for a game about Israel and Palestine began a decade ago, when Burak and Brown met as graduate students at Carnegie Mellon University’s Entertainment Technology Center in 2004. Politicians and pundits were denouncing games like Grand Theft Auto, giving the entire medium a bad reputation. Brown and Burak shared a mutual love of games, and Brown wanted to prove the naysayers wrong. “We wanted to show good things could be accomplished through video games,” he says. Given Burak’s background as an Israeli intelligence officer, the idea for a strategy game based on the Israeli-Palestinian issue formed quickly.

A major challenge in designing the game was making the narrative as impartial as possible. This involved lots of research. Brown met with Palestinian government officials, NGOs, and student groups to get their input on how best to tell their side of the story. “I went in somewhat nervous and horrified by what I was about to do,” he recalls. At first, Palestinians felt he was trivializing their experiences by turning them into a game. But for the most part, he says, “we’d end up with full support by the time I went out the door. They’d say, ‘If you’re doing this for the right reasons, I’m happy to help you create the right narrative.'” 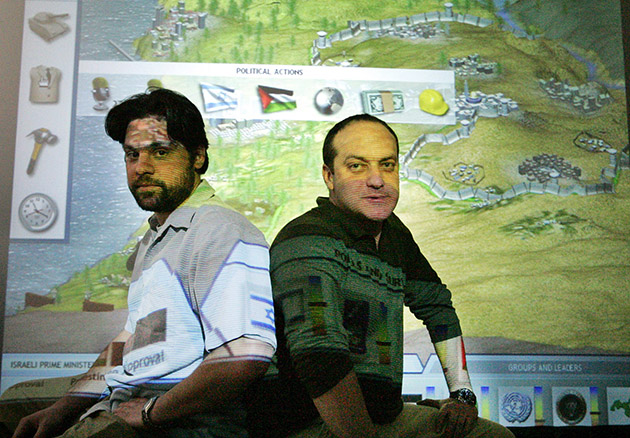 Then there was the challenge of developing realistic gameplay. Brown and Burak maintain that neither side is harder to play, just different. On the Palestinian side, building infrastructure is key to figuring out a peace strategy, which Brown says is an easier concept to get for many players. On the Israeli side, however, “if you’re not viscerally reacting to the violence that’s coming at you, it’s hard to bring yourself to build support to do other things.” Plenty of players think one side is easier than the other, supposedly revealing the creators’ true sympathies. “One way to know you’re balanced is if you’re being criticized for being imbalanced in every possible way,” says Brown.

PeaceMaker, which has English, Hebrew, and Arabic versions, was a commercial success—100,000 copies were bought in Israel alone. That’s significant for a socially conscious indie game. With its lofty goals of empathy and understanding, PeaceMaker may seem like the gaming equivalent of being made to eat your veggies. It’s not. PeaceMaker is a serious game, but it’s exciting and satisfying to play. When it goes well, it feels like you’re putting together a complex, living puzzle, and when it finally comes together, it feels glorious. (Fittingly, the game’s logo is two puzzle pieces.)

“People were thanking us and saying how good it felt to achieve peace. It gave them renewed hope there was a way these things could happen.”

What’s more, PeaceMaker actually may have a positive impact on players. Carnegie Mellon conducted several studies on the game. One found that playing it may “make it possible to reduce personal bias and learn to stand in another’s shoes when engaging in conflict resolution exercises.” Brown and Burak have heard from players in the Middle East, and the responses affirmed their intentions for the game. “People were thanking us and saying how good it felt to achieve peace,” Brown says. “It gave them renewed hope there was a way these things could happen.”

Despite the game’s age and the recent conflict in Gaza, PeaceMaker still feels realistic and relevant. Brown is in the process of it both to reflect the current situation on the ground and to fit a rapidly evolving gaming environment. It’s now easier than ever for independent developers to distribute games with platforms like Steam, and the iPhone and iPad have revolutionized the industry. Brown and his team intend to release a version of the game for mobile platforms in addition to traditional desktop.

Beyond that, Brown says, “these games that are really trying to hit hot button social issues are getting much larger support in the indie gaming community.” Burak isn’t working on the new PeaceMaker, but is now president of Games for Change, a nonprofit that helps develop socially oriented games. He’s helped push out a diplomacy game about Syria, an Oregon Trail-style game simulating migration across the US-Mexico border, and UN-backed mobile game aimed at girls in the developing world.

Developing PeaceMaker 2.0 is primarily about showing how the Israel-Palestine conflict has changed in the last seven years. “Our inciting incident for the Palestinian side currently is a shelling in Gaza that has civilian casualties. Has that really changed?” Brown wonders. “Instead of suicide bombs on the Israeli side, it’s a kidnapping, or it’s a tunnel found going into Gaza.” Though these kinds of details have changed, the core logic behind the game has not. “The unfortunate part,” Brown says, “is that the huge underlying issues where the balances might shift hasn’t radically altered.”

The new PeaceMaker should debut by the end of the year. It will likely be a conversation-starter, a playable Rorschach test for how one sees the conflict. In July, Burak wrote an op-ed for Kotaku in which he described an Israeli general playing the game. He bombed the Palestinians into submission, then wondered why he lost. “There is nothing to learn from this game about reality, as I took all the right actions,” Burak quotes the general as saying. Despite that, Brown tries to stay upbeat about the game’s potential to change minds. “Anything that affects even some people positively is worth doing.”