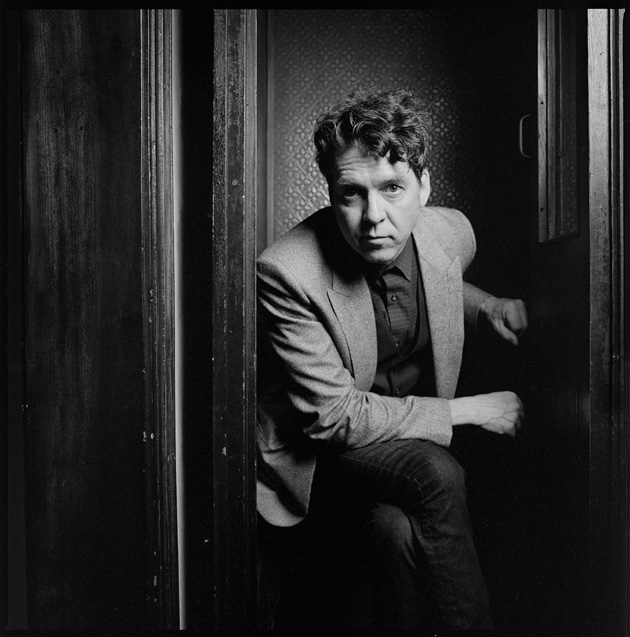 Since the mid-’80s, Joe Henry has alternately worked as a musician and producer in a career that encompasses soul, avant-garde jazz, country, R&B, rock, and folk. The range of artists he’s produced—Allen Toussaint, Solomon Burke, Bonnie Raitt, Emmylou Harris, Aaron Neville, and Mose Allison among others—and the styles he has incorporated into his own music speaks to his reverence and broad understanding of American popular music as an art form.

Invisible Hour, out this week, is Henry’s 13th solo album and his first independent release since departing his long-time label Anti-. In a statement on his website, Henry says the album is about marriage and “the redemptive power of love in the face of fear.” He elaborated on the theme, and his career, during a recent chat in New York City. The following is in his words.

Just like being a musician, marriage is a constant engagement. There are moments where you have to care more about it than how either of you feel. When you commit spiritually and psychically, it doesn’t mean that you don’t make mistakes all over the place. People are seduced into thinking on that beautiful day that you’ll never have any significant problems. You think, “That couple over there, that won’t be us.” You have to let go of the idea that having a problem means somehow you’ve been betrayed. Otherwise you cut yourself off from your greatest resource, which is acceptance that you are going to encounter obstacles.

“When you are just beginning, it’s amazing how little affirmation you really need, just the tiniest scrap.”

I have come to recently understand that I am not betraying the great mystery and poetry of song tradition to deliver the music as candidly as I can. With this album, I’m more consciously devoted to a particular sort of emotional clarity. I wanted to create the illusion, even if it is just an illusion, that nothing stands between the listener and the songs. I was working from an orientation of playing along with an acoustic guitar and being very orchestral in open-tunings, in real time on one instrument, enamored by the immediacy of that. I don’t think it is more authentic; I just mean there is a rumble, and weather in the air happens with the overtones of vibrating instruments in a room. I find that incredibly evocative and I wanted the record to have as close to that sensation as possible.

T-Bone Burnett was one of the first people I ever reached out to as a completely naïve singer-songwriter living in Ann Arbor. I made my first demos and was literally taking addresses off of the back of records: “T-Bone Burnett c/o Warner Brothers Records, Hollywood.” He wrote me back nonspecifically, “I lost your letter that came with this tape. I’m not really sure what you’re looking for, but it’s really great and you should keep going.” That was really what I needed, to have reached outside of my small frame and get some kind of response.

When you are just beginning, it’s amazing how little affirmation you really need, just the tiniest scrap. You’re in the desert and it’s a drop of water and you can keep going. To this day, when I get letters from people, I’m powerless not to respond. I feel like I have to let them know that they’ve been heard.

When all of us are starting out, we measure ourselves against the icons and we aren’t always aware of the ways in which we adopt somebody else’s posture. It’s like you want to be in the Boy Scouts, you think you have to put on that uniform to be authentically recognized. You live long enough and you realize, “I am part of the troop if I decide I am.” And that’s something you come to out of maturity—you can’t pregame it. The real trick is, how do you survive long enough to actually get good?

“I think making a record in three or four days invites a particular kind of focus and commitment that is almost invariably positive.”

As a producer, some of my most meaningful work has come not from just sitting at home and the phone ringing one day but writing to people I’d like to work with. That’s how I wound up working with Bonnie Raitt. I sent a cold letter through her manager and I said, “If you don’t know, here’s who I am, here’s what I do, if you ever want to have a conversation or try something with no obligation, I’d be wide open to it.” I’ve gotten a lot of really meaningful work that way. I’ve had very few people who I’ve reached out to just not respond. The only people who categorically told me no were Kenny Burrell and Dr. Dre, who I wanted to produce a record of mine. I couldn’t get him to talk to me, but fair enough. I knew it was a long shot.

I make records quickly and affordably, because I believe in it. Not just because it’s economically expedient, but because I think making a record in three or four days invites a particular kind of focus and commitment that is almost invariably positive. I work with musicians who are not only willing to work that way, but love working that way, who appreciate the fact that right now this song gets revealed, conjured into the room, like a séance. It’s an exciting way to work it’s a sacred way to work, and as it turns out it’s also a really affordable way to work.

I’m stunned at how many people who live and breathe and admire the records from the ’40s, ’50s, and ’60s quickly forget that that’s how they got made. I don’t want to call out any names, but I could tell you a story of somebody revering a record from that period, pulling their hair out about their own record they spent a year and a half making. I’m saying, “You know that record that we were talking about the other day? Five of the ten songs on were recorded in one afternoon. And you are not going to get there if you are laboring over it to the point where you can’t stand the sound of it anymore. No one else is going to be able to stand the sound of it either.”

Putting this album out myself came down to this: I have had a great association with my former label, but I believe absolutely that artists should own their masters. They don’t share that view. I have nothing but respect for Brett Gurewitz, the owner of Anti-, but he has a band, Bad Religion, and I guarantee that Brett would not put out a Bad Religion record that he didn’t own the master for.

“At a certain point you start asking, “What am I getting for an advance that wouldn’t put me in an economy car?”

How I take a record into the world needs to be as unique as how I think about writing a song. It’s laziness or cowardice on my part not to, and then be sour at someone else when the record doesn’t do better. Bonnie Raitt—we made her last record together—she put that out on her own record label and she could’ve gone anywhere with it. I know for a fact because I had labels coming to me saying, “Is there any way you can get a meeting with her? Because she won’t talk to us.” I know she won’t. She’s not going to. This is a grand experiment for her and she is thrilled about it. At a certain point you start asking, “What am I getting for an advance that wouldn’t put me in an economy car? I am turning over my masters in perpetuity that my children ought to own. I’m better off taking out a home equity loan on my house, making my own record, and paying it off when I sell 10,000 of them, which I can.”

Everybody is trying to rebuild the model because it is not music that is broken down. People consume music more than they ever have. What is corrupt and failed is the delivery system. Good riddance to the very few labels who tell artists they aren’t allowed to work until we ordain that your work has value. When I was first starting out and there was no such thing as sitting at home with a computer with a great microphone, I sat on my hands until a label would give me the tiniest scrap to go try to do any goddamn thing. The thought takes root is that you don’t matter and your work can’t possibly matter. People say now any kid with a laptop can go sit in his basement and make a record. Yeah! How about it? It doesn’t have to sell 10 million copies to be meaningful.

“Contact” is an occasional series of artist portraits and interviews by Jacob Blickenstaff.