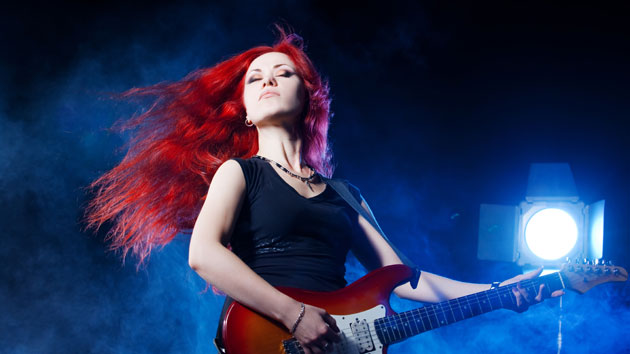 Anna Brundage is a “too-tall red-headed woman with bangs who rides her bike to school from the East Village” to teach carpentry to little girls in safety goggles. But she used to be a rockstar—a bohemian, coked-out siren with a devoted following and an unreplicable sound. After her second album tanked, she left the scene. Now, seven years later, bruised, divorced, and a lot less innocent, Anna wants to reclaim her old life and yearns to be back “wandering, tracing an unpredictable path.” Life on the tour bus, take two—only this time, she’s 44.

Anna isn’t real. She’s the heroine of Wonderland, Stacey D’Erasmo’s dreamy new novel, which comes out this week. Though D’Erasmo is a novelist and writing professor, not a rocker, by trade, she sometimes explores musicians in her literary criticism. (See this March New Yorker piece.) In Wonderland, we hop on the tour bus and join Anna’s band on a romp through Italy, Germany, and Eastern Europe. Rock stereotypes abound: ecstasy and cigarettes, late night revelations in dark bars, plenty of sex (with fans, bandmates, and venue owners), and music festivals drenched by surprise rainstorms. But D’Erasmo’s finely tuned prose turns these clichés on their heads; each scene is saturated with detail and made surreal through her imagery. In bed with a mechanic, for instance, Anna sees her lover transform: “I want the wolf, though the wolf keeps darting away, turning into the bicycle-fixing man, then back into the wolf.”

Along the way, Anna reveals pieces of her past. In a braided series of flashbacks, some as short as a page, we meet the people who’ve shaped her: a precious sister Lila; her father, a celebrity sculptor and her artistic foil; her soulmate, Simon; a drug-addled singer; and the eager yet often hapless members of her band. The mood is dark and emotional, but D’Erasmo tempers it with moments of levity, such as with a wordless Greek chorus made up of Anna’s carpentry students. When the singer is indecisive about something, “the hundred little girls with hammers furrow their brows.”

For Anna, singing is not just a release or a route to celebrity; rather, she earned her cult following by “tearing up the sound, erasing half of it.” Her first album, Whale, sounds at once “like a dress slipping off a bare shoulder and a girl falling down a well.” As the title of the book hints, the story is about abandoning stability in a quest for some sort of nirvana. Via her comeback tour, Anna wants desperately to go “through the eye of the needle” back to this wonderland—”to the broken, the illogical, the roads that double back on themselves, the weird, the uncanny, the in-between.”

Given the book’s sensual imagery and magnetic heroine, it’s hard not to wonder what Anna would sound like—I pegged her as some combination of Björk, Florence and the Machine, and Janis Joplin. In any case, I convinced D’Erasmo to suggest a mix of songs that Anna would have been listening to on tour. “They’re what inspire her, what get her going, what make her want to make music,” the author told me via email. “They aren’t necessarily, or even mostly, what her music sounds like. They’re the sounds that make her want to make her own sounds.”

In addition to the songs in the Spotify widget above, D’Erasmo also suggests that the entire album The Very Best of Prince should be included. (Not a Spotify user? Click here.)