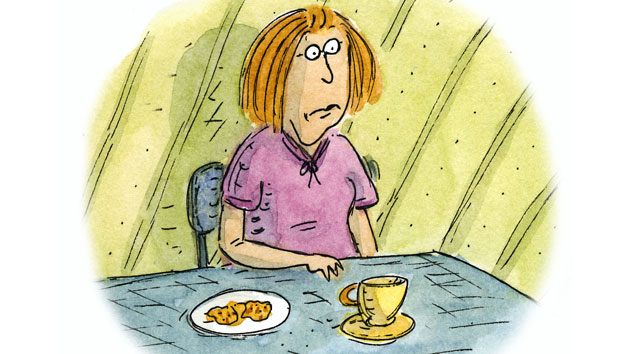 "I'd rather take opium than hemlock. I sometimes think, once you're lying there, why not do something that might be fun?"Roz Chast

Plus: Vintage Chast cartoons from the pages of Mother Jones.

You know a Roz Chast character when you see one: a person, often on a sofa, whose bemused, slightly off-kilter expression suggests some deeper angst or anger. The longtime New Yorker cartoonist’s new memoir, Can’t We Talk About Something More Pleasant?, introduces two real-life characters: her parents, George and Elizabeth, a sweet motormouth who “chain-worried the way others might chain-smoke” and an outspoken assistant principal known for her furious “blasts from Chast.” The book chronicles their reluctant slide into extreme old age, which left Chast, now 59, to sift through decades of emotional baggage and mountains of stuff—like their junk-crammed “Crazy Closet.” Her poignant, funny story will resonate with anyone who’s experienced the roller coaster of an elderly relative’s final years.

Mother Jones: As a child you felt your parents had their own thing going and you were kind of in the way. When did you come to that realization?

Roz Chast: Probably pretty young. I was an only child, and they worked. They’d been together for a very long time before I was born. They were very connected to each other. They were older—chronologically and in a lot of other ways—than my friends’ parents. I never saw my father wear any kind of pants except for, like, man pants, those gray slacks. Forget jeans. Not even corduroys or khakis. When we’d go to the beach, they’d be wearing their street clothes. They weren’t very casual. 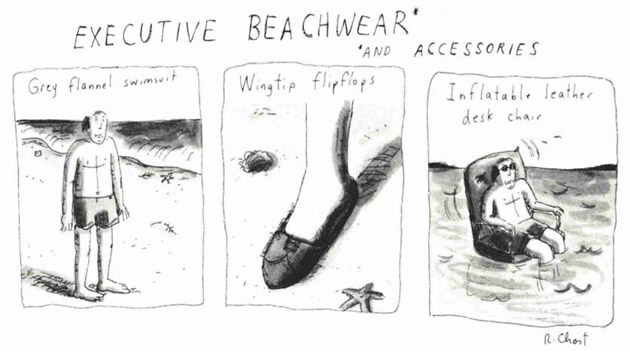 MJ: How have your views on aging changed as a result of caring for them?

RC: It’s definitely made me think a lot more about it. Recently I was visiting my son and we went to this huge indoor flea market. At first it was like, This is great, this is wonderful. And then within a few minutes, I just looked around and felt like, I just threw away all this shit. This is all dead-people stuff, crap that people got rid of that was maybe in their old apartment or in their parents house or whatever. Do I want this cute little alarm clock from 1962? Not really. So I just have a different feeling about stuff. And as I get older, it’s not likely to completely go away. I could be wrong. I could decide to suddenly collect cute alarm clocks.

MJ: So you don’t have a Crazy Closet?

RC: Every drawer is like a mini-Crazy Closet. I’m just hoping it doesn’t get that bad. I didn’t go through the Depression like my parents did.

MJ: Were they unable to throw stuff away as a result?

“It was borderline hoarding. They just shoved things in the closet.”

RC: Oh yeah! You didn’t throw away jar lids or Band-Aid boxes. There was a drawer of those amber plastic vials, what pills come in—you might need them for, I don’t know, three cotton balls or something. It was borderline hoarding. They didn’t throw away old clothes. They just shoved things in the closet so everything was pressed. I think I must have been the only person who really understood why Joan Crawford was so upset about the wire hangers. It was just like, She’s right! She’s right!

MJ: Your mom was adamant that she and your dad were “going to 100” together. Do you share that determination?

MJ: Your title refers to your parents’ reluctance to talk about aging or dying.

RC: I think it’s pretty representative of our world, our culture. We don’t really talk about it. You just take old people and you put them in a place, and I hope that doesn’t happen to me, but it’s not like I’m actively doing anything to prevent that—which is weird.

MJ: It’s hard to know what the alternatives are, though. You talk, tongue in cheek but also seriously, about how your final years could be made happier: Why not eat all the ice cream you want or take opium or even have hemlock as an option?

RC: I’d rather take opium than hemlock. I sometimes think, once you’re lying there, why not do something that might be fun?

MJ: At what age did you realize you wanted to be a cartoonist?

RC: I used to love to draw things that made me laugh or made friends laugh. When I was 13 or 14, I started thinking, This is what I like to do more than anything else.

MJ: Your work often has people sitting on living-room sofas. In your book, even Death sits on one. Do sofas hold some sort of significance for you?

MJ: The New Yorker is notorious for its weekly cartoon pitch process. What’s your hit-to-miss ratio?

RC: It goes in streaks. I could not sell for three weeks and then sell three weeks in a row and then not sell for two weeks and then sell for one. Bob Mankoff, the cartoon editor, talked once about this experiment with rats and pellets. The rats that pushed down the lever and got a pellet every time would eventually get bored, and the rats that never got any pellets would eventually stop pushing. But where it was random, where they’d push down the lever and get three pellets, and then three pushes and no pellets, and then a push and two pellets—they’d keep on pushing forever. I think about that a lot. I think that cartoonists are the rats with the levers.