About a week ago, after many months of planning and executing the new design you see today, I took a journey into the recent past of MotherJones.com via Archive.org’s excellent Wayback Machine. The tool allows you to view websites as they appeared at specific moments in the history of the internet, and I wanted some context for this homepage redesign, my first. We were, after all, the first nongeek magazine to go online way back in 1993, and I was nervous for the launch.

Looking back over the last four designs, they tell a story that you, dear loyal reader, probably know by now. It’s the story of our rapid recent growth, from a great little magazine to a high-powered 24/7 news org. My bosses, Monika Bauerlein and Clara Jeffrey, recently received a major award and the committee put it rather nicely:

Mother Jones under Jeffery and Bauerlein has been transformed from what was a respected—if under-the-radar—indie publication to an internationally recognized, powerhouse general-interest periodical influencing everything from the gun-control debate to presidential campaigns. In addition to their success on the print side, Jeffery and Bauerlein’s relentless attention to detail, boundless curiosity and embrace of complex subjects are also reflected on the magazine’s increasingly influential website, whose writers and reporters often put more well-known and deep-pocketed news divisions to shame.

We’ve been on a three-year cycle with our redesigns, and a lot has changed around here since the last update in January 2011. The 47 percent video happened, record traffic growth happened, more record traffic growth happened, and we hired a lot of people, expanded collaborations, and won a lot of awards. Our website now has nearly 6 million monthly unique visitors, and we’re on pace to do 150 million pageviews this year, and that’s before factoring in the upcoming midterm elections, which we’ll cover the dickens out of. 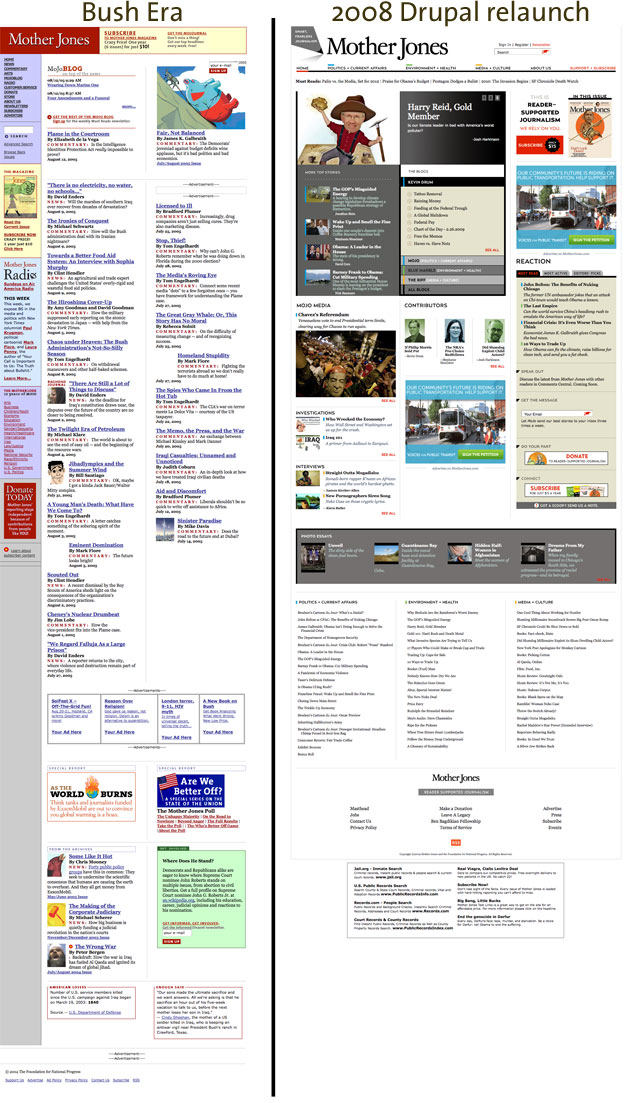 Close observers of online media are well aware that homepages just don’t matter as much as they used to. Facebook and Twitter send us enormous amounts of traffic, and all those folks skip over the landing pages and go directly to the stories. Nevertheless, 1 out of every 6 pageviews to the desktop version of MotherJones.com is to the homepage. It’s still important.

So what are you getting here, exactly?

Over the next year, our supertalented tech team will be building an elegant new backend for the site. After that, we’ll do this again, and I promise we won’t wait three years next time. In the meantime, we’d love your feedback on the changes in the comments below.