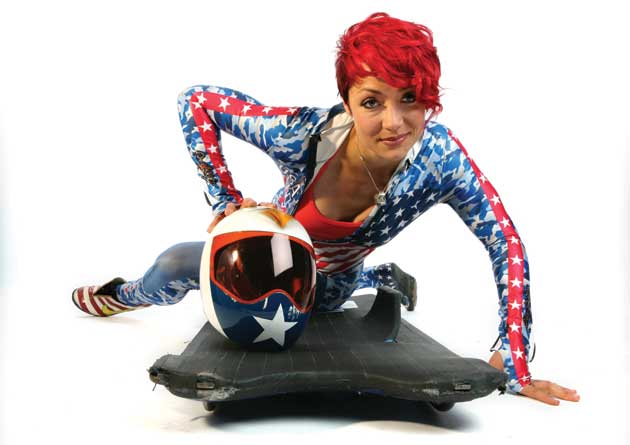 As far as Katie Uhlaender can tell, skeleton—which involves hurtling yourself face-first on a sled down an icy course at top speeds of nearly 90 miles an hour—is the safest sport she has ever tried. “I’ve had eight surgeries,” she says, “but none of them were from skeleton.”

Four years ago, preparing for the Vancouver Olympics, Uhlaender twice shattered her left knee—the first time in a backcountry snowmobile accident—requiring four surgeries and keeping her on crutches until 20 weeks before the Games. Add in the emotional pain of the death of her father, former major league outfielder Ted Uhlaender, and it’s no wonder that she struggled to an 11th-place finish in Vancouver.

Now, for the second Olympics in a row, Uhlaender is coming off an injury. This time, it’s skeleton-related: She suffered a concussion on a training run in Lake Placid a few months ago and was limited throughout the fall. “It was the first time in 10 years that I’ve had to not take the second run,” she says.

With Sochi on the horizon, I chatted with the 2012 world champ about how she got her start on the sled, how to slide without thinking, and how to manage the double-standard between men and women, in sports and beyond:

Mother Jones: So how did you ever get started in skeleton?

Katie Uhlaender: I just happened to get to meet someone completely random and got sucked in before I knew better. [Laughs.] I just met a girl who was a bobsledder, and she talked me into trying it. Three weeks into it I won junior nationals, fourth week I went to junior worlds, eighth week I won senior nationals. I kind of started winning right away, and it was either go to college and get a Ph.D. or become an Olympian. So I basically made a choice.

MJ: Had you played a lot of sports growing up?

KU: My father was a major league baseball player, so if you weren’t an athlete, you weren’t cool. I just was an athlete and was looking for a sport, and that’s what happened. I just took advantage of an opportunity and made a choice.

MJ: What was it like to have so much success so early?

KU: It’s all relative, right? First, when I went to junior worlds, I was conflicted because I didn’t feel like I deserved it. And then I talked to my dad, and he referenced his first at-bat in the big leagues. He couldn’t stop shaking. And then he realized that every legend before him took the same steps he took up to the plate. Once you get to the plate, you have two options: You either quit, or you try to hit the ball.

MJ: What are the necessary skills for skeleton success?

KU: I think you need really good eye-hand coordination or reaction time, and you also need to be a pretty quick sprinter. You don’t want to be too bulky, because the aerodynamics play a part. But [fellow American Olympian] Noelle Pikus-Pace is 5-10, and I’m 5-foot-3, so it’s very individualized. But I don’t think I came into the sport with an innate talent; I think I have an innate ability to work my butt off. I would stay at the track for hours and hours and absorb as much information as possible and ask questions and never stop. I still haven’t stopped working.

MJ: What’s the thing that you have needed to work at most?

MJ: Do you remember what that first run was like?

“It’s the total acceptance of fear and knowing you don’t have brakes. You have one choice, and that’s to go for it.”

KU: I just remember thinking that it was really fun, and that it wasn’t as scary as it looked. Anytime I get the sensation in my stomach that makes me giggle, I think it’s fun. That’s why I keep doing it. It’s the total acceptance of fear and knowing you don’t have brakes. You have one choice, and that’s to go for it. It’s fun. You just have to relax and let gravity take you. When you do that, that’s what makes you giggle. Relaxed chaos: Everything’s going so fast, and you’re just trying to stay calm and absorb it and enjoy the ride.

MJ: What do you think about during the ride?

KU: Nothing. There’s not much time to be thinking. [Laughs.] If you’re thinking, you’ve wasted time. You do everything outside of the track. You do a lot of visualization, watching. When you’re on the sled, if you’re trying to think, you’re just going to be behind yourself, because there’s not enough time. You can’t think as fast as you can do.

It’s a lot of feeling. It’s hucking yourself downhill super-fast. You have to know where you’re at and how your body is responding to where you go in and where the pressure of the corners are. It’s a lot of body awareness and knowing where you are on the track, but that’s a lot different than thinking.

MJ: How do you negotiate the line between self-preservation and pushing it to the edge?

KU: In training, I’m pretty reserved. I’m basically a disaster when I’m learning something, and then I put it all together. And that’s because when I go down the track, half the time I’m focused on one or two things, and I’m lettin’ ‘er go. Or, if I know I’m lettin’ ‘er go, my body is just all over the place. I just focus on a couple of things at a time and try to put it together in the race.

It’s really hard not to think too much. If I try to control the sled too much so that I have perfect lines, I’m really slow. The key to skeleton is to find the line that you’re talking about, and I think I spend most of training figuring out where that sweet spot is…And everybody has their own way of doing that. Mine just tends to be more violent. [Laughs.]

MJ: Speaking of injuries, what sort of insurance do you have?

KU: USOC’s Elite Athlete health insurance. Otherwise I would go out and get a job and buy some. Which is what everybody should do. [Pauses.] I think we should change the topic. Because I know that Mother Jones is very, very liberal, and I’m very, very not. [Laughs.] I’m just going to be honest.

MJ: Ha, sure. Well, what does the women-in-sports landscape look like from your vantage point?

KU: Being a female athlete and turning 29—having a year left to live—I just discovered recently that I think the biggest thing for women that I think would empower them most is to accept who they are and what their abilities are. Always strive to be your best—like, I always challenged men, you know, in foot races or whatever as a kid growing up, because it was a way of pushing myself and challenging myself against the best—but you have to know and accept that men are born with testosterone. [Laughs.] You can beat them for so long, but eventually they’ll catch up.

You know, there’s a reason why men and women compete in different categories. There are differences. But the key to being a respected and, I don’t know, beautiful woman is to accept responsibility for what women have. You have to maintain a certain self-worth and demand to be treated a certain way. That’s only possible if you take responsibility for your actions—failures or successes.

MJ: Do you think there’s a double-standard for female athletes?

“I grew up thinking I could have the same attitude on the field that my dad did. When I did that in real life, people thought I was a total bi-atch.”

KU: There is a double-standard between men and women. My father was a major league baseball player, and I grew up thinking I could have the same attitude on the field that he did. When I did that in real life, people thought I was a total bi-atch. [Laughs.] You know, because women are held to a different standard.

But there’s a reason for that. Because we are mothers, we are seen in a different light, we have a different role in society. You can’t pretend that you’re a man. Accept that you’re a woman. And work it! There are certain benefits we get being women—and we deserve them! But at the same time, don’t take advantage of them. You have to walk the line and show that you have self-worth. If you lose yourself, then no one’s going to respect or pay attention to anything you have.

But if you can show you’re a strong, beautiful woman, and that you know what you want and what you’re doing—and even at times that you don’t, but you’re willing to accept the fact that you need to learn—that’s what’s going to make a difference for that woman in the world. Like Miley Cyrus is completely lost! The girl crossed the line. You know what I mean? It’s fine to be sexy, but you can be sexy without licking a hammer!