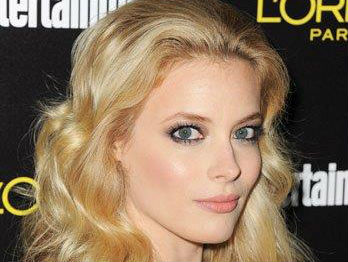 Nowadays, Gillian Jacobs (pronounced with a hard G) is famous for her role on NBC’s acclaimed comedy Community, which returns for its fifth season on January 2. The series has brought her many fans and accolades, and she has since appeared in 2012’s Seeking a Friend for the End of the World and 2013’s Bad Milo! The Pittsburgh-born actress will also star in the 2014 comedy Walk of Shame (alongside one of her personal heroes, Elizabeth Banks), as well as the sequel to Hot Tub Time Machine, in which she plays the female lead.

But what if Jacobs had never gone into acting? What would she be doing instead? Well, if she had her way, she’d probably be sitting on the highest court in the land.

“I never pursued anything but acting,” Jacobs tells Mother Jones. “But as a kid, I was really interested in the Supreme Court. I wanted to to be a Supreme Court justice, but didn’t want to be a lawyer. I just wanted to go straight to being a justice.”

I ask her to name her all-time favorite justice—the one who might serve as the greatest influence on Associate Justice Gillian Jacobs.

“All the ladies,” she answers waggishly. “Like Ginsburg and Sotomayor. We need more of them, but I’m glad we have some.”

On Community, Jacobs plays Britta Perry, Greendale Community College’s resident bleeding-heart, ex-anarchist activist who has, over the show’s four seasons, mellowed into an aspiring therapist. Jacobs had her own real-life rebel streak—when she was in elementary school. Those were her days as, in her words, a “little baby feminist” who was passionate about such issues as (believe it or not) paid parental leave.

“When I was younger, I was very vocal to the point of being strident in my views,” Jacobs says. “When you’re a kid in elementary school, you can often feel like you’re the only woman who cares about maternity and paternity leave, so you feel like you’re talking to a brick wall…In sixth grade, we all had to write this opinion paper. Most wrote about things like why we should be able to chew gum in class—I wrote about why women should receive equal pay. So I understand Britta.”

“If I wanted the government in my uterus, I’d fill it with oil and Hispanic voters,” Britta says.

Jacobs says she has the same convictions she did as a kid; she’s just less intense about it. (Her love of public radio—a love for which she was relentless teased in high school—also endured, as she is a devoted listener of Radiolab, This American Life, and The Moth Radio Hour.)

Having portrayed Britta Perry for more than four years, she has had to tap into her dormant radical impulses. After all, Britta is the character who rages against the “fascist oligarchies” that are “raping [the rainforests] to make hamburgers.” In the fifth season’s fourth episode, she comments on abortion and reproductive rights by declaring, “If I wanted the government in my uterus, I’d fill it with oil and Hispanic voters.”

It’s partly because of over-the-top sermonizing like this that she’s constantly labeled by friends and strangers as “the worst.”

“To play Britta, all you have to do is conjure up the most ‘worst’ parts of yourself, amplify them, and proceed!” Jacobs explains. “But maybe I am the worst—because it’s not that hard for me to play her.”

For Jacobs and her Community colleagues, the new season marks a triumphant return. Right after the close of season three in 2012, news broke that Sony Pictures Television, the show’s studio, had fired creator and showrunner Dan Harmon, the man responsible for much of the show’s pop-culture savvy and intelligent idiosyncratic humor. The series has consistently teetered on the brink of cancelation over low ratings, and Sony and NBC execs had been frustrated with Harmon’s creative approach and management style since the show’s first year. (Harmon also consumed a lot of liquor, showed up late to work, and too often fell asleep on the job.) After one Harmon-less, fan-disappointing season, the difficult but brilliant showrunner was reinstalled following persistent lobbying by the cast, particularly by Joel McHale (who plays ex-lawyer and witty manipulator Jeff Winger). In June, Harmon compared viewing the fourth season to “being held down and watching your family get raped on a beach,” a comment for which he later apologized.

“I’m so glad he’s back, obviously!” Jacobs says. “It’s wonderful. I know that we’re all biased in his favor, but season five is going to contain some of our best episodes. It feels like we’re firing on all cylinders.”

“Everything that makes you feel alone right now in high school is what’s gonna make you an awesome, interesting adult.”

Those introduced to Jacobs via the endearing ineptitudes of Britta Perry might not be familiar with the actress’ larger body of work—one defined by equal parts grit and childhood fantasy. She started acting when she was eight, an extracurricular activity she thrown into because her mom and schoolteachers were concerned that she had no friends and was talking to herself on the playground. (“Everything that makes you feel alone right now in high school is what’s gonna make you an awesome, interesting adult,” Jacobs said in a video made for Rookie magazine in 2012, in which she advises a lonely, insecure “nerd girl.”)

She graduated from The Juilliard School in 2004, and by 2006, Jacobs had already won high praise from the New York Times, for playing a photographer and rape victim in the off-off-Broadway production of cagelove. “[M]ake sure to remember the name of Gillian Jacobs, a stunning Juilliard graduate who has the glow of a star in the making,” the Times critic gushed.

These days, when she’s not indulging in heavier fare or advancing her career as a comic actress, she’s lending her voice to cartoons, including the Nickelodeon series Monsters vs. Aliens and Seth MacFarlane‘s American Dad! “It’s another way for me to stretch and grow as an actor,” says Jacobs, whose favorite cartoons range from Batman to Animaniacs. “And I love it, cuz I’m a goofball!”

But Jacobs also has a dream project in mind—one that’s significantly removed from the realm of the goofy. “I’ve always thought—and I don’t even know if I’d be right for the part—that Jean Seberg would make a great biopic,” Jacobs says. “She was in Jean-Luc Godard’s Breathless, she played Joan of Arc. She had this eventful and traumatic adulthood, she thought the FBI was after her, and she became a darling of the French New Wave. It was a fascinating life that she lived.”

For the record, the FBI was most definitely after Jean Seberg. The bureau wiretapped and extensively monitored Seberg because of her financial support for American civil rights groups and the Black Panther Party in the 1960s. FBI director J. Edgar Hoover personally advised the Nixon administration on any dirt they found on the American actress. (The FBI even gave her photo to the Secret Service, flagging the actress as a potential presidential security threat.) The bureau also manipulated the press into spreading the false rumor that the baby Seberg was carrying was not fathered by her husband but by a Black Panther. Seberg blamed the stress resulting from that planted story for the premature birth of her daughter, who died two days later.

It’s a fascinating story, indeed. But for now, Britta Perry will have to do.