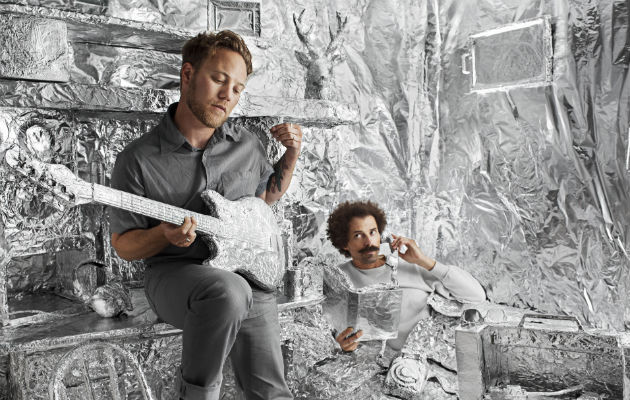 Rogue Wave frontman Zach Rogue (a.k.a. Zach Schwartz) is feeling optimistic about the summer to come. Well, relatively so: “I feel like the forces of nature have tried to kill this band,” he tells me, “but they haven’t succeeded yet.”

He’s referring to the seemingly neverending series of tragedies that has plagued Rogue Wave over the years. Drummer Pat Spurgeon nearly died of kidney failure during the band’s 2006 tour—which became the subject of the PBS documentary D Tour—and the band’s former bassist was killed in a house fire in 2008. Most recently, Zach’s father passed away.

And the band played on. Rogue Wave’s fifth album, Nightingale Floors, which comes out this week, packs more of the rattling, inertia-filled pop songs that characterized the band’s early work; the sorts of songs we heard in abundance on late-2000’s episodes of The O.C., One Tree Hill, and Friday Night Lights. But the music stands out, thanks in no small part to Rogue Wave’s mission: to produce straightforward yet memorable songs that they would want to listen to, songs lacking pretension but not emotion, and using what Rogue calls an “inclusive” approach to songwriting.

Hours before the Rogue Wave’s recent 1 a.m. performance for a packed house at San Francisco’s Bottom of the Hill—their first official concert in two years—I sat down with Rogue and Spurgeon on the venue’s outdoor patio. Zach lamented the passing of the in-house cat, while Pat grabbed a pint and pulled up his jacket to proudly show off his perfectly worn-in Oakland A’s t-shirt. They were positively giddy for their comeback and eager to talk about their change in direction since their last album, 2010’s Permalight.

Mother Jones: So, tell me about the new album.

Zach Rogue: Well, we took time off. I was really burned out. The last tour kind of gutted me—I was a gutted fish on a table with my guts out, pretty much—I was spent. I just wasn’t feeling very good about a lot of things. And I didn’t want to go back unless I felt really good about what we were doing. So I worked on another project for a year and put out a record and kinda played really quiet music, duet music. I was playing with a female singer, just taking time off and clearing my head. I didn’t want to do Rogue Wave unless I felt really excited again, like it was when we were starting out.

So Pat and I hadn’t hung out in like a year, and we just started playing in our studio in Oakland, and as soon as we started, it felt right. Right away, it felt inevitable that we were going to work on these songs and have a new record; we need to kind of start over and start with a new label and do all new things and it feels good. I feel like we’re a whole new band now. We are! We have all new players.

Pat Spurgeon: It felt like we got a second chance to make our first record—like how we worked when we first started recording where we would just fire ideas back and forth. Like, “Oh, you’ve got that? Alright. Play that, play that!” It just felt very natural. [Producer] John Congleton, in the studio, is just absolutely another member of the band. He knew when to be a producer; he knew when to hang back; he knew when to be a goofball and when to be serious and it was just perfect.

MJ: That’s a lot of positive things. As opposed to what?

ZR: I think on the whole last album cycle, it just didn’t get where we wanted it to be. The music we were making and the way we tried to pull it off live, it honestly didn’t sound like us.

PS: It was produced with an iron fist.

ZR: It was a labor. It was difficult, and the thing I love about the new record is that it truly sounds like us—mistakes, the layers that we like, the way we harmonize, [Pat’s] weird toys. And it’s way more emotional. It feels like we’re just happy again. There are still dark undertones, and you know, life and death and all that stuff, but it feels like a band that’s glad they’re playing instead of a band that’s trying to execute something. We don’t like playing to a click track. We like just playing music.

I’d rather be saying, “I feel your pain” than saying, “You can’t relate to my pain.”

With the exception of a couple songs, I wanted it to be a really utilitarian record where the chord progressions and the structure is not that complicated. Where, if someone wanted to pick it up and listen and play along, they could. I want it to feel inclusive. The last song on the record, it’s just the same three chords over and over again.

PS: It’s so easy I can play it on keyboard while I’m playing drums.

ZR: They’re not all like that, but that spirit. And that’s how I feel about Guided by Voices, or Springsteen, you know, The War on Drugs—some of these bands where you feel like you’re part of what they’re doing because you feel like you could play along at home. I don’t like it when I feel like there’s a band that’s trying to outsmart me with their crazy wild erratic strangeness.

I feel like we have things to say on this record, you know, life and death things. And I want to have it be about emotion and inclusion. I’d rather be saying, “I feel your pain” than saying, “You can’t relate to my pain.”

MJ: Zach, I wanted to ask how you feel about Neil Young, because your voice can sound so much like his.

“I don’t do a lot of soloing on the guitar, but when I do I totally steal from Neil Young.”

ZR: Neil Young is kind of my idol, and it’s funny you say that because I’m a contributor for this new magazine and I actually wrote about Neil Young for the new issue. Not exclusively about him, but he’s a major part of this essay I wrote about music that I find comforting in times of distress.

PS: From a drumming standpoint, like with Crazy Horse, it’s so stripped down; it’s more powerful than any Rush song. It’s just beat, beat, chet. It’s just nothing. And it’s so powerful because it does what it’s supposed to do only. It doesn’t try to overshadow.

ZR: I don’t do a lot of soloing on the guitar, but when I do I totally steal from Neil.

MJ: So what do you mean by music that you listen to to feel “comforted”?

ZR: When I’m in pain. Music kind of displaced a lot of religious spiritual stuff that I would lean on when I was younger.

MJ: I’m curious how it feels to be so pegged to your personal story. Every time someone writes you guys up, it’s about a series of…

“We recorded at a time when I needed to make music. It saved me, personally.”

PS: It happens. We’re in a tight-knit community, four or five of us, and this major stuff is gonna happen.

ZR: A lot of the time, journalists just need a narrative. And that narrative happens to be a lot of personal stuff. And we’re still going. Maybe that narrative will change. We talked before about how you need music because you need comfort, and we recorded at a time when I needed to make music. It saved me, personally. You can hear it in the music, to have this sadness but this utter joy to have a place to put it.