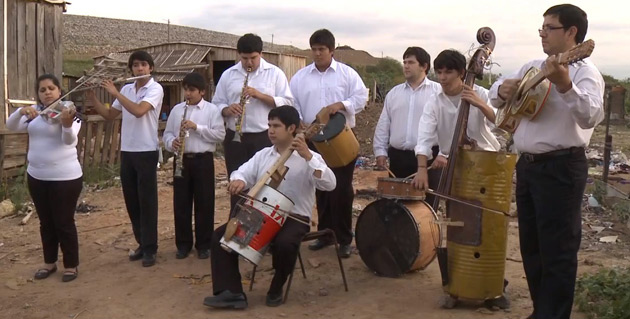 Close your eyes and listen to Juan Manuel Chavez launch into the Prelude of Bach’s Cello Suite No. 1, and you would never guess that, instead of spruce and maple, his instrument is crafted from an old oil can, a beef tenderizing tool, and a discarded pasta making device—all of it scavenged from the landfill that surrounds his home in Paraguay.

Chavez is a cellist in the Landfill Harmonic Orchestra in Cateura, an Asunción slum where bottle caps, door keys, and paint cans have been given new purpose. Under the supervision of local musician Favio Chávez, these utterly impoverished kids make beautiful music on instruments constructed almost entirely out of materials reclaimed from the dump.

Filmmaker and Asunción native Alejandra Nash first heard about the phenomenon back in 2009, and decided to produce a documentary about the kids—she and her co-producers are aiming for a 2014 release. She’ll have plenty of support. The teaser she posted online last November quickly went viral, with 2 million views on Vimeo, and nearly 1 million on Youtube. It’s inspiring. Check it out…

Now her project’s Facebook page has more than 125,000 likes. And a Kickstarter campaign Nash launched in April to help fund the film’s completion has raised almost $200,000, well over the $175,000 she’d asked for. Beyond funding post-production work, the additional money will help finance a world tour for the orchestra, and an expansion of what has come to be known as the Landfill Harmonic Movement.

The idea for the orchestra first came about after Chávez brought a youth orchestra from the neighboring town of Carapeguá to perform in Cateura. The Cateura kids wanted to learn, too, but as Chávez points out in the teaser, “A community like Cateura is not a place to have a violin. In fact, a violin is worth more than a house here.”

So he and local garbage picker Nicolás Gómez began experimenting with instruments they constructed from trash: Tin water pipes, buttons, bottle caps, and spoon and fork handles make up the body and keys of the saxophones. Oil or paint cans and recycled wood are used for the string section. 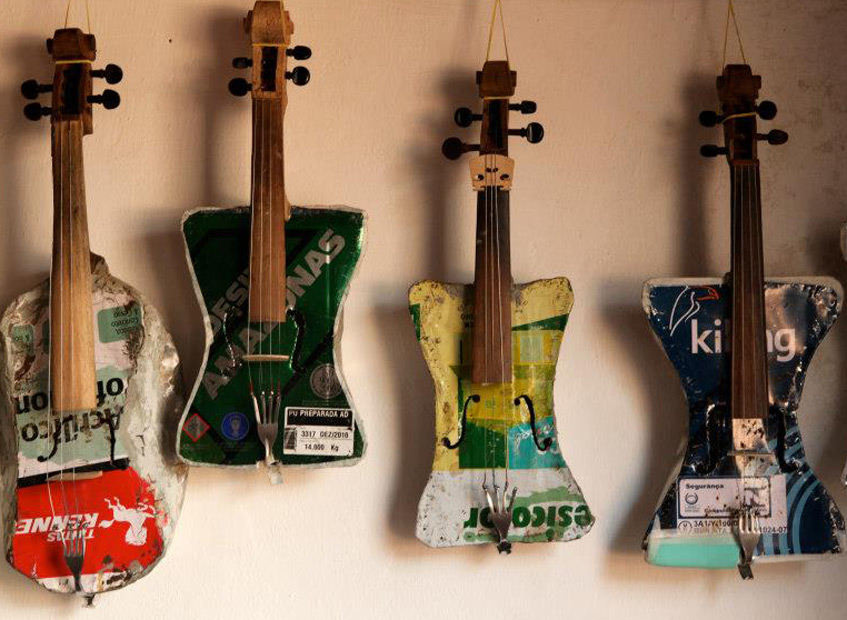 The orchestra consists of about 20 kids, from 11 to 19. They play mostly classical music, but the children have also learned some more-contemporary Latin music and orchestral versions of Beatles songs. Chávez helps them choose the instruments that suit them best. “One of the kids actually has a hearing problem, he doesn’t have a musical ear at all,” Rodolfo Madero, the film’s executive producer, told me over the phone. “He wanted to be part of the orchestra so they built the drums section. He’s good at it.”

These kids “represent the fact that not everything is disposable,” says Rodolfo Madero, the film’s executive producer.

Madero believes the orchestra will prove transformative for many of the children. For some, it already has. “These kids are acquiring a skill,” he says. “They are becoming better musicians every day, they are getting the experience of playing at international forums.” The orchestra has already traveled to Brazil and Colombia, and has been invited to perform in Japan, India, Europe, and the United States this year. One of the program’s flute players now plays for Paraguay’s national orchestra, and the Miami Symphony Orchestra has offered scholarships for a couple of the students to join their youth symphony.

Beyond the music, Landfill Harmonic has an obvious environmental message. Some 2,500 families live in Cateura, and according to a 2010 UNICEF report, it is “the final dumping site for more than 1,500 tons of solid waste each day.” Filmmaker Nash notes in the press materials that the town gets flooded with contaminated water whenever it rains: “The lack of environmental education is an issue, as well as the garbage/recycling system, which is archaic.” And because of the landfill’s location along the Paraguay River, inadequate waste management in Cateura is threatening an essential national water source. “What these kids are showing us is that you shouldn’t throw away your things or people just because of the way that they look,” Madero told me. “They represent the fact that not everything is disposable.”

“It’s been an important change for the community to see these kids rising above the reality that they live in a landfill.”

While the project may be small, Madero says, it should be replicable, and will inspire people to consider the social and environmental impacts of their own behavior. Health and environmental organizations in Kenya, Mexico, and Haiti, he says, have expressed interest in launching similar projects in their countries.

“It’s been an important change for the community to see these kids rising above the reality that they live in a landfill,” Madero says, adding that he knows some parents who were inspired to quit using drugs after their kids took up music. What’s more, money left over from the orchestra’s performances goes into a fund that provides small no-interest loans to the families to repair homes or build extra rooms. “Community wise it’s very, very significant,” he says.