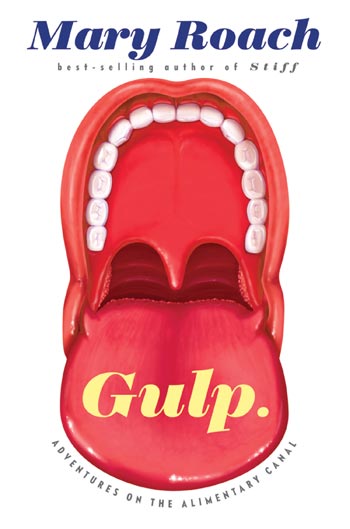 Let Mary Roach be your guide through all things digestive. The author of winsome expositions on astronauts (Packing for Mars), cadavers (Stiff), and sex (Bonk) takes on the alimentary canal in her new book (out yesterday). Whether Roach is drooling into a pipette or has her head up her own ass (literally, watching her own colonoscopy), her enthusiasm is downright infectious. Naturally, I asked her to talk about Gulp while forming some grilled-cheese boluses—bolus being the technical term for a chewed up ball of food just before it’s swallowed.

In an otherwise lovely Oakland bar, we discussed rectal smuggling, the ins and outs of making fake poop, and why calling someone an “asshole” is such a great compliment.

Mother Jones: What made you decide to write a book about the digestive system?

Mary Roach: I was talking to a physician reader, and he got to telling me about the anus, which is this amazing thing that nobody appreciates. Here’s this ring of muscle with nerves that has to discriminate between solid, liquid, and gas, and let it out accordingly. He’s like, “No engineer could design something as multifunctional and fine-tuned as an anus. To call someone an asshole is really bragging him up.” That was the moment I thought, “Oh yeah, this could be an interesting book.”

MJ: In the book, you go to prisons and talk about prisoners smuggling things in their rectums—up to three smartphones at a time! How did you find a guy willing to talk so openly about his rectum?

MR: It was surprisingly easy. I sent an email one day to the California Department of Corrections and Rehabilitation and because smuggling contraband, particularly cellphones, is such a problem, he said, “Yeah, come on down and I know just the prisoner for you.” And he goes, “Will four hours be enough?” I was like to talk to a stranger about his rectum? Yeah, I think four hours is good.

MJ: And the prisoner was totally willing to talk?

MR: I think it was a welcome diversion and a little bit of pride. Everybody does it—it’s like sticking something in your pants pocket. They showed me a videotape from the visitor’s room: There’s a guy sitting with his young son and his wife. The wife hands him something, and the son is right there playing a board game. And he just reaches back—it’s like he’s putting his wallet in his pocket. That’s it. Boom. Done. They’re very smooth.

MJ: One of the funniest things in the book is that you go through these old diet fads that seem totally ridiculous, like the one where you chew each bite hundreds of times—

MR: You know what’s amazing, though? That one came back! They call it chewdaism. It all comes back; they all come back. It’s unreal. Every crazy fad from the 1800s comes back or they never go away. It’s like fashion, like everything’s already been invented, and somebody stumbles onto it and people will always, always be looking for an answer for some vague illness they can’t get a diagnosis for.

MJ: You talk about how we make tons and tons of fluids in our own body—we swallow pints of saliva and mucous everyday. That’s not gross, but as soon as a bodily fluid is outside of us, it suddenly becomes very gross.

MR: I found that fascinating—the boundaries of the self. Bodily fluids and solids are universally the most disgusting things we as human beings can come upon, but as long as they are inside us, it’s part of you. What I really love is that somebody, Paul Rozin, actually tried to figure out the microanatomy of the mouth, like at what point if you have chewed food or saliva on your tongue, does that disgust you? And also people extend them to people that they love: their babies, their lovers. “My husband’s semen, that’s fine. I’ll scarf that down no problem, but anybody else, ugh.” I love that someone actually made that a subject of their research.

MJ: Did Paul Rozin give people questionnaires or was he more, well, hands on?

MR: He has been known to mix up very convincing simulated dog poop with peanut butter and Limburger cheese for the odor. He was looking at when a child absorbs a cultural sense of disgust. When they’re below about two years ago, it’s very hard to disgust a baby. “Oh I’ll put it in my mouth, bring it over here.” So he gives the kids a sterilized bug, human hair, fake dog poop, but other times he’s used questionnaires. There was another one where he showed people fudge that looked like shit. He told people, “This is fudge, there’s no shit in here.” And they wouldn’t even touch it. Let alone eat it.

MJ: I must have a high gross tolerance as well because I was really surprised that many of the scientists you talk to have never had people interested in their work before. I was so grossly fascinated with all of it.

MR: For the scientists, they’re kind of puzzled and pleased that somebody finds their work interesting. It makes it fun for me. I feel like I’ve sort of turned over a stone that hasn’t been turned over. Some like gross stone at the bottom of the ocean that nobody wants to go near.