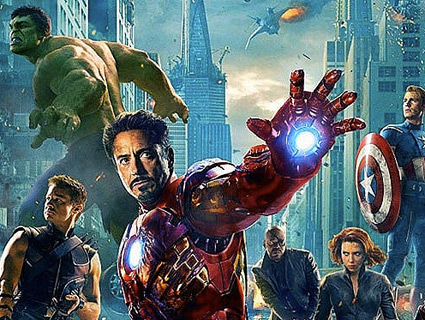 Take the frothy, industrial-strength nerdgasm you experienced the first time you watched Iron Man. Or the volcanic nerd-max you achieved on opening night of Thor. Or the patriotic nerd-OOOOOO-MG you embarrassingly sang out when you saw Captain America: The First Avenger in theaters.

That’s what you get with Marvel’s The Avengers, a rousing shot of popcorn flash, smooth wit, and accessible comic-book reverence.

For the past few summers, Marvel Studios has been pumping out adaptation after adaptation of the venerated Marvel Worldwide canon. The Avengers is the Traveling Wilburys of Marvel’s superhero sagas—an ambitious, loud epic in which you get to see the all-stars, from Hawkeye to Black Widow, band together to defend the planet from high-powered space fascists.

The action kicks off when angry Norse god Loki (played by British actor Tom Hiddleston) teleports his way to North America in his quest to impose totalitarian rule on all humankind—”I am burdened with glorious purpose,” he pronounces menacingly. It’s hard to take this wannabe galaxy dictator seriously at first, mainly because he talks like Masterpiece Theatre and looks like a 30 Seconds to Mars music video. But he starts mass-murdering people with his vast arsenal of space powers, so the guy kind of demands attention. Thus enter the Avengers, a ragtag team assembled by S.H.I.E.L.D. director Nick Fury (snake-punching virtuoso Samuel L. Jackson), to counter the onslaught. Here’s a refresher on the crew:

Throughout its ample running time, The Avengers stays afloat by wearing its affection for its characters proudly on its sleeve. The film takes long, explosion-free stretches of time to carefully establish a multitude of character profiles. Their unique motivations and insecurities are addressed with sympathy, enthusiasm, and—most crucially—humor. For this, credit is entirely due to the writing and directorial chops of Joss Whedon, the pop-cult icon behind Firefly and Dr. Horrible’s Sing-Along Blog. Whedon’s willingness to regularly emphasize dialogue and sentiment over spectacle and adrenaline demonstrates the impressive range of talent that his rabid fans have been hyping up for the past 15 years.

None of this is to say that the movie plays as a two-and-a-half-hour behavioral therapy session for the Hulk; the set pieces—particularly the climactic sequence that turns downtown Manhattan into a scorched-earth battleground—are tightly choreographed, dizzying displays of cinematic 3-D blowout.

The Avengers certainly does elevate itself well above the novelty of simply overloading one movie with a diverse cast of famous superheroes. But it is reassuring to know that the most memorable moments come from Whedon and Co. giddily milking the novelty element for all it’s worth. You finally get to see the Hulk fight Thor on a hovering battleship. Iron Man and Captain America tag-team killing henchmen and gigantic pagan monsters. You get to watch Samuel L. Jackson with an eye patch point his gun and shout things like, “Sir! Please put DOWN the spear!”

It’s terribly good fun and, all told, not a bad way to launch the summer movie season.

On a final note: In the film’s closing montage, there’s a clip in which one of New York’s Democratic senators squawks to reporters about the unaccountability and vigilantism of the Avengers. “We need them to answer for what they’ve done,” the wet-blanket-throwing legislator insists, foreshadowing the regulatory pushback that will likely crop up in sequels. This quick dig at American liberalism won’t surprise anyone following the Marvel Cinematic Universe. For example, the Iron Man movies—easily the best of the recent string of Marvel Comics adaptations—double as bona fide odes to conservatism. In Iron Man 2, Tony Stark gleefully mocks a panel of lawmakers and brags that he “successfully privatized world peace.” In the DVD commentary of Iron Man, Marvel frontman Stan Lee discusses why he created the character in the first place: to piss off some hippies:

It was the height of the Cold War. The readers—the young readers—if there was one thing they hated it was war, it was the military, or, as Eisenhower called it, the military-industrial complex. So I got a hero who represented that to the hundredth degree. He was a weapons manufacturer. He was providing weapons for the army. He was rich. He was an industrialist. But he was good-looking guy and he was courageous…I thought it would be fun to take the kind of character that nobody would like—that none of our readers would like—and shove him down their throats and make them like him.

And with The Avengers, it is undeniably smirk-inducing to see the Marvel franchise continuing to blow token kisses at the right.

The Avengers gets a wide release on Friday, May 4. The film is rated PG-13 for intense sequences of sci-fi violence and action throughout, and a mild drug reference. Click here for local showtimes and tickets.