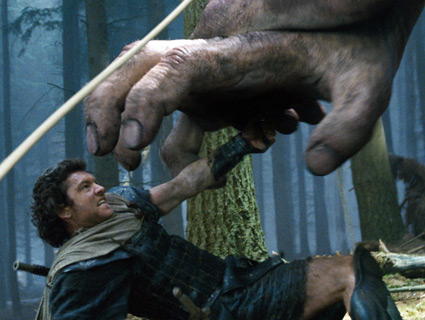 Wrath of the Titans is a heaving headache of a movie. It’s uninspired, tragically un-hip, and only a modest improvement over its limp snooze-fest of a prequel.

It ransacks Greek mythology, spoiling canonized sagas with 3-D hellfire, frantic deity-punching, and acute pointlessness. The enviable cast—featuring Danny Huston, Ralph Fiennes, Toby Kebbell, and Bill Nighy—sleepwalks through their lines and gestures, when they’re not being upstaged by cudgelling CGI. The smash-and-flash, orchestrated by director Jonathan Liebesman, is a sad Xerox of Troy and that movie your college roommates couldn’t stop quoting loudly. The script, written by three established screenwriters, is a labyrinth of suck. There is nothing in this movie that is even a sliver as cool as its rock n’ roll trailer.

And after the film finally dodders to a close, you will walk away from it thinking one thing: Thank goodness I didn’t watch that sober.

If you watch it dry, Wrath of the Titans nets 1 star…maybe 1.5 stars. But the movie scores a respectable 3 out of 4 if you see it blitzed out of your mind, in a chemically altered condition during which Cross of Iron and Soul Plane feel about equal in quality.

So I honestly recommend that you check it out; you just have to get drunk first—irreparably drunk. I’m talking, “I can’t tell the difference between any of the Baldwin brothers anymore” drunk. Like, sloshed to the point where if you were, say, a film critic, the only note you’d be able to scribble out during the whole screening is this: 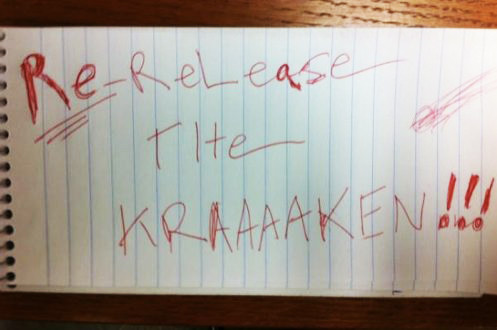 Due to these add-ons of bourbon, rice wine, rakia, Natty Light, and a CamelBak full of rum punch, this might end up being the most expensive movie ticket you’ll ever buy. But in the end, it’s pretty much worth it.

When the movie starts, your blurred vision and dulled senses inform you that you’re watching something about titans doing what they do best: Titaning. Sure, there’s a betrayal-filled plot that revolves around gods, demigods, and mortals going to war with one another; but right now your brain tissue has essentially fermented and you can barely remember where you work, much less plot details drawn from mythical history.

It is thus advisable to sit back and watch things go boom. The film takes place ten years after Perseus (played by Avatar‘s White Messiah Sam Worthington) finished quashing the Kraken, *  a gigantic civilization-destroying cuttlefish from hell. And just when Perseus was getting the hang of being a single dad, disgruntled gods Hades and Ares get all pissed off at the universe, again, and take it out on mankind. Mr. Perseus must then come out of retirement to return to a career in divine ass-whomping.

It’s at this point that the movie degenerates into a large-scale panic attack of an action flick. Lucky for you, you are—as we’ve firmly established—loaded. In your sluggishly heightened state of consciousness, you’ll have to fight the urge to violently grope the 3-D visuals coming straight at your face. What should seem like cheesy depth-perception tricks instead seems like the single most groin-grabbingly good thing to emerge from Hollywood since Humphrey met Ingrid. The fire dragons, rampaging cyclopes, and collosal lava-monster are the computer-generated centerpieces, and the result is pure sensory overload that pummels you into having a fun time.

The sustained effect that results leaves you so giddy that you don’t even care that Liam Neeson, who is supposed to be playing the almighty Zeus, looks like he’s dressed-up as Santa.

Wrath of the Titans, enhanced by the booze-abetted visceral jolt, is the cinematic equivalent of a keg stand: It’s rowdy, dumb, escapist, and you’ll come out the other end with fewer brain cells than you had going into it. It is, however, very difficult to determine how much of that is the movie, and how much of it is the hooch.

Wrath of the Titans gets a wide release on Friday, March 30. The film is rated PG-13 for intense sequences of fantasy violence and action. Click here for local showtimes and tickets.

* To be clear, there is no plot twist in Wrath of the Titans in which the Kraken from Clash of the Titans suddenly materializes to stage a comeback. I was just as disappointed as you are. But if you really want to pay tribute to the best character from the Titans franchise, you should pre-game Wrath with The Kraken Black Spiced Rum.