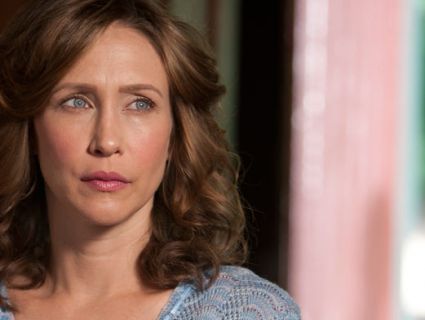 Vera Farmiga, 38, is probably best known for her Oscar-nominated role as Alex Goran, playing opposite George Clooney in 2009’s Up in the Air. But the New Jersey-born actress—who now lives on a farm in upstate New York with her husband, Renn Hawkey, their two children, and some angora goats—has only recently started receiving the kind of attention she surely deserves.

Since her 1996 debut as a Broadway understudy, Farmiga has landed dozens of roles in television and films, including The Manchurian Candidate remake, The Departed, and Down to the Bone—a 2004 indie that earned her a best actress award at Sundance. Opening in theaters this week and next is Higher Ground, her directorial debut, based on This Dark World, a 2002 memoir by Carolyn S. Briggs.

An engrossing film, Higher Ground tells the story of faith discovered and lost in the persona of Corinne Walker, played at various life stages by McKenzie Turner, Vera’s kid sister Taissa, and Farmiga herself. Following a brush with tragedy, bookish Corinne and her has-been rocker husband, Ethan, find Jesus in a small, cultish evangelical community. Corinne, however, chafes against its strictures, and her crisis of faith threatens all she holds dear. The film offers a deeply critical, yet humanizing, depiction of evangelical life. I sat down with Farmiga at a San Francisco hotel to talk about her Catholic upbringing, her eyewear obsession, and why she really burns her scripts.

Mother Jones: Okay, tell me something about yourself that can’t be found on the internet.

Vera Farmiga: Oh, it’s all out there. The myths—and they’re bastardized. They’re always inflated. Like do I burn my scripts because it’s such a…no! I burn them because I don’t have garbage disposal and we take things to the transfer station, and my scripts more often than not come watermarked. And I don’t want these scripts being sold in the East Village with my name on it. I burn them, but it’s not always because I’m a maniacal anarchist feminist.

MJ: Is it true you considered a career in optometry over acting?

VF: Yeah, I wanted to—I really did—and still might. I had a magical optometrist. One of the hardest things I ever prayed for as a kid was to wear glasses. It was an attention-seeking thing, I’m sure, like wanting poison ivy. Sure enough, my vision started to deteriorate. Literally over the course of six months, I think it vanished. It’s weird, because there’s no one in my family who has any short-sightedness. So I was introduced to one of the sweetest eye doctors ever. That’s where my little quirky spectacle collection started. I just dug him. I thought he was such a sweet human being. He was one of those people you meet and think: “I want to be just like him! I want to help people.”

MJ: Speaking of helping people, you’ve said one of your reasons for directing Higher Ground was “the pathetic excuses for female characterization” in Hollywood scripts. What do you attribute that to?

VF: I don’t know. First of all, it’s up to the actress, even if you get a really deluded characterization, to fight against it. There’s a certain rigor that we have to apply to distill representations of what it means to be a woman. I’ve taken a lot of characters where I’ve been like “Oof! It’s so watery.” That’s the challenge, you know, to flesh them out. And that job description applies to guys as well.

MJ: Do you think male characters are written less superficially?

“My parents instilled in me the importance of defining God for yourself.”

VF: Not necessarily. Not superficial. I’m saying that the depth of exploration of the male psyche and the female psyche is uneven. I see further, deeper renderings of what it means to be a man. And I think it’s—well look, most of the central characters are male. And that’s part of it.

MJ: How did you connect with this project?

VF: [Screenwriter] Tim Metcalfe sent me one of the first drafts with the memoirs. And the memoirs read to me like a diary that I wasn’t necessarily supposed to read, and I loved that intimacy. I loved it. I felt like I was peeking into someone’s sacred, secret, spiritual diary. And I thought it was a challenging and intriguing and unique topic to talk about. It’s something everyone struggles with: conceptualizing God for themselves. Even if you’re an atheist.

MJ: I understand you were raised in a strict Ukrainian Catholic household.

“I’m someone who can sit in a Buddhist temple, and I can sit with Pentecostals or with Orthodox Jews.”

VF: It wasn’t strict. It was just Catholic. I grew up in a Christian home. It’s pretty basic, and probably 60 percent of people do, and it’s no different than that story. The strictness comes with religion in general. Whether you grew up Jewish or Orthodox Jewish or Muslim, there are certain rules and regulations. But my parents instilled in me the importance of defining God for yourself. Just because I’m telling a story about a woman losing faith is not my rebellion against what I grew up in. If anything, it really affected the way I approached the story, and in fact, approach everything. I don’t judge my characters—or this community, which I came at without dukes up.

MJ: Are you still religious?

VF: Religious would mean that I belong to one very particular denomination. And I’m someone who can sit in a Buddhist temple, and I can sit with Pentecostals or with Orthodox Jews, and I still feel like I am in tune with all of them.

MJ: But do you observe…

VF: Do I observe holy days and holidays? Yeah, the ritual is very important to me. It’s part of being Ukrainian Catholic. So every holy day we’re baking pierogis and not eating meat. Do I pray? Yes. Prayer is very important to me. You don’t necessarily have to be religious to pray. I’m incredibly spiritual. There are like tens of thousands of denominations; I don’t fit in any one of those denominations comfortably. But I have a very personal relationship with God. It’s hard to talk about because it is so personal. I also have a lot of frustration with religion—organized religion—because it’s man-made, because it’s man-regulated. And it has nothing to do with my relationship with God.

MJ: How familiar were you with evangelical Christianity when you took on this film?

“I’m sure there will be people who will say this is Satan—this film.”

VF: I’ve sat in many evangelical churches. I have a lot of friends within that community. Spending time with Carolyn Briggs was of utmost importance. But I felt like I wouldn’t be perceived as a dilettante on the subject matter because it’s part of my childhood. I felt like I had enough voyeurism to tell the story.

MJ: How have evangelicals responded to the film?

VF: So far, everybody that I’ve talked to at film festivals, or pastors—I’ve spoken to pastors and tastemakers—have been extremely grateful for such an honest portrayal. There’s a pastor who wants to use this as a teaching tool for inspiration and for appreciating honesty. Because it takes a lot of courage to say: “You know what? I’m trying to grasp this but it’s kind of ungraspable, divine mystery. But I admire your faith.” Like [Corinne] says to the pastor: “It’s a struggle for me more than it is for you.” And I need to acknowledge that because with that acknowledgment comes growth. Yes, she’s ambivalent. But these are the moments in our lives that force us to relearn and reorient.

MJ: Do you think that kind of open-mindedness is lacking among evangelicals, or with organized religion in general?

VF: I think that’s probably a challenge. [Laughs.] Because evangelical Christians are so passionate for their concept of God and firmly believe that Jesus is the way, the truth, and the life. And nobody gets to the Father but by him. That’s zest, that’s fervor, that’s passion. I don’t know, my dad is someone who, that’s his ticket to heaven, but he’s someone who doesn’t argue. He can sit down with a Jehovah’s Witness. He can sit down with a Mormon and with someone Jewish—I’ve seen him do it over the course of my life—and relate and love them and discuss and find connection. And that’s Christ-like. [Laughs.] It’s really personality-pending. I’m sure there will be people who will say this is Satan—this film. But my only job as an actress—as a storyteller—is to provoke discussion. Those are the best sermons. Not the ones that instill dogma.

MJ: This film was quite the family affair.

Putting Fynn in the film was “probably some of the worst parenting I’ve ever done.”

MJ: Even Fynn, your three-year-old, has a cameo as Corinne’s baby.

VF: Yeah, therapy sessions in the future, I know. [Laughs.] I am a mom. You know, my kid was young. I need to bury my face in his chunky thighs; that gives me energy, so he needed to be on set. He was the right age. He’s incredibly photogenic. I mean, you see he’s like a little creature. Those scenes work because of Fynn. And it’s only because I was in the room—like, he saw me in his periphery and all these cameras were undaunting. It’s probably some of the worst parenting I’ve ever done, like forcing him to cry on camera. I didn’t force him to cry—we turned the cameras on when it was 3 a.m., and he really just wanted to go to sleep. But it’s cheap labor! You have a certain budget you gotta work with, and family comes cheap. [Laughs.] And Taissa [who plays a young Corinne] for obvious reasons—it was crucial, that bridge from adolescence to adult. I could fudge everything else, but I thought that was the one key transformation.

MJ: When I watched Higher Ground, I couldn’t help but think of Michele Bachmann. Did she enter into your thoughts?

VF: Not at all. I don’t really think about Michele Bachmann too much, in all honesty. I think if I thought of Michele Bachmann, I would’ve had to have forced Corinne to walk back [to evangelicism] at the end. No, that’s a conservative Christian skew. But I’d love to see what she thinks about the film.