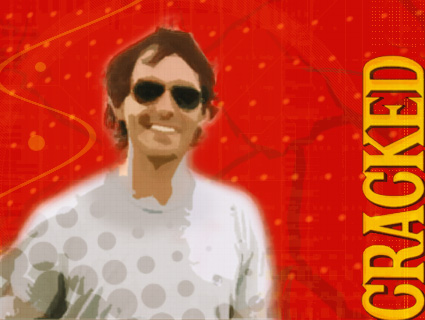 If Bill Murray and P.J. O’Rourke had a hilarious and slightly deranged lovechild, it might resemble Cracked.com. Or maybe just Cracked columnist Seanbaby, in a good way. Allow me to introduce the editor-in-chief of the comedy site that claims to suck more productivity out of America’s day than competitors FunnyorDie, The Onion, and CollegeHumor combined.

Cracked, a humor magazine created in 1958 to compete with Mad, was supposed to relaunch a print version in 2006. It never happened. Meanwhile on Cracked.com, website editor Jack O’Brien—a former Georgetown philosophy major and “Primetime Live With Diane Sawyer” writer—was allowed to publish whatever made him laugh. This turned out to involve cartoon villains, the Cubs, and whether to piss on Tom DeLay if DeLay were on fire. Shortly after O’Brien launched Cracked.com in 2006, Demand Media scooped up and expanded the humor site to include pop culture trivia, a virtual writers’ room of 2,500 funny people—and, recently, movie guides. You can read more about joining the comedic meritocracy here.

Mother Jones: If Cracked.com were a comic book superhero, what would its origin story be?

Jack O’Brien: A young journalist was bitten by a radioactive spider while holding copies of Spy magazine, National Geographic, and the old National Lampoon. When he failed to develop any interesting superpowers, we decided that a website would be a more efficient use of our R&D budget.

For the first year and a half, the site was half of my job and 10 percent of a few other peoples’. Everyone was focused on the idea of relaunching the print magazine for some reason. Since all the money was being spent on the magazine, we were allowed to get away with publishing whatever made us laugh on the website. When the magazine relaunch didn’t work out, we were looking for real jobs when the site started picking up traction and Demand Media saved us. I’d published a lot of stuff up on the site by that point, and Demand helped me figure out what was resonating with the audience, what wasn’t working, and what was technically illegal in most countries.

MJ: In the comedy universe that includes 30 Rock, The Daily Show, The Onion, The Oatmeal, xkcd, and Bill Murray in general, where does Cracked.com fall?

JO: I love all of those and am honored to be consuming some of them for energy in your analogy. From an editorial perspective, I think we’re in the same family as The Daily Show. What they do for the news, we do for science, history, and drunken bar arguments about pop culture.

The Onion does a very specific thing really well. When I launched the site, there were lots of blogs and websites churning out Onion-style fake headlines. That was really the first thing I felt strongly about from an editorial perspective: Whatever Cracked was, it shouldn’t be a worse version of the Onion.

Bill Murray is my favorite mythological figure. I guess you could say Cracked shares his enthusiasm for giving people stories that their friends will never believe. Also, we’re both much friendlier with the Wu Tang Clan than you might at first assume.

JO: I think she was making fun of the idea that you can make large generalizations about types of comedy writers. Nevertheless, in the interest of gender equality, every comedy writer on our team now has to pee in a cup.

The one thing I was disappointed to see in her second New Yorker article was the idea that you need Harvard Lampoon alums in your writer’s room. That was something that I’d always heard when I was in college. You had to go to Harvard to write comedy. We have writers from all over the world in all different professions—history professors, doctors, retired bartenders, stay-at-home moms. And I think our content is better for that.

That’s the one accomplishment that everyone on our team takes pretty seriously. We feel like we’ve been able to lower the barrier of entry to getting published and read by millions of people. We have plenty of first time writers who have never written anything more ambitious than a funny email to a group of friends, and the next day they’ve been read by millions of people, have Facebook groupies, and are checking into rehab.

JO: At Cracked.com, we make money the old fashioned way: with a printing press that we “borrowed” from the government in 1958. As with most things that are loaned, we forgot to return it and it would appear that they have forgotten that they let us borrow it, so… yea, we’ve had a pretty good run. Aside from the money we print, a large majority of our revenue comes from advertising. That includes everything from graphical ads on our homepage and content pages, pre-roll on our video, and custom content that we create specifically for advertisers—some folks would call that “branded entertainment.” Until someone comes up with a more clever name, we’ll stick with that. A smaller chunk of our revenue comes from things like book sales (we published our first book in December; it was a NY Times best seller in January), iPhone app sales, and other miscellaneous endeavors.

JO: Well, that’s the other reason we have writers and contributors everywhere. You could take one of those hyper-paranoid 1950s PSAs and replace the words “communist sympathizer” with “Cracked writer” and you’d have a pretty accurate description of our team: Our numbers grow every day; we’re everywhere but you’d never know it because we blend in seamlessly and also because we’ve been drugging your water supply for a while now. We’re impeccably positioned for a revolution of the people. Or of the apes. We’ll probably just go with whichever side looks like it’s winning.

JO: Hey, we have hunting licenses for a reason. If Americans weren’t given limits on the number of animals we’re allowed to kill, there would be no more deer.

Zombies aren’t as fast as deer. They’re not as fast as the guys with the guns and the elaborate camouflage. If you turned half of America into zombies, I’d give the zombie half a couple of weeks until they no longer existed.

I think that’s one of the reasons we’re so obsessed with the possibility of a zombie apocalypse. If each of our favorite apocalyptic scenarios is a first person shooter on a different level of difficulty, then robots are difficult, aliens capable of galactic space travel are pro, global pandemic is the worst video game ever made, and zombies are novice. They just shamble around like a drunk shooting gallery. I guess a pessimist could say that means we’re lazy, but I think it just means we’re honest with ourselves.