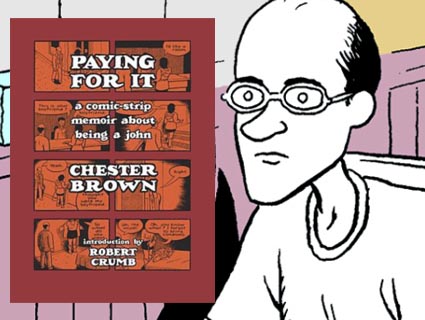 More than a decade ago, Chester Brown decided he was through with romance. Certainly all the crummy stuff—the insecurity, the jealousy, the fights. The only thing he wasn’t ready to give up was the physical part. As Brown, an award-winning Canadian cartoonist, explains to an ex at the beginning of his new memoir, “I’ve got two competing desires—the desire to have sex, versus the desire to not have a girlfriend.”

That dilemma lead him to make a radical resolution: To never again have a girlfriend and to start paying for sex. The consequences of that lifestyle choice are the subject of Paying For It, a comic-book chronicle of Brown’s experiences as a john. Honest and unashamed, Brown explores all aspects of his foray into prostitution, from furtively cruising for hookers on his bike, friends’ reactions of disgust and curiosity, and the challenge of budgeting for sex when you’re almost broke.

Brown, best known for his fascinating comic biography of 19th-century Canadian revolutionary Louis Riel, bares all as he draws each of his assignations with 23 different women over 5 years. There’s nothing prurient or in-your-face about this. He alters or conceals the features of the women he’s with (to protect their identities, he says), and he draws himself with a perpetually blank expression, his eyes hidden behind opaque glasses. Though he insists he’s enjoying himself, the sex scenes blur into a monotonous loop—which may be the part of the point. A dedicated libertarian, Brown seeks to convey that there’s nothing remarkable about a well-mannered guy like himself mixing business and pleasure. Willing buyer, willing seller—what’s the problem? (Just in case his story doesn’t convince you, Paying For It has an appendix that takes on 22 anti-prostitution arguments.)

As the public face of the usually anonymous sex client, Brown doesn’t come off as a pervert or a predator. Nor is he the rational actor he thinks he is. Paying for It ends with a twist—mentioned below—in which he finds that giving up the real girlfriend experience may be more complicated than he’d anticipated.

Reached in Seattle, a stop on his book tour, the 51-year-old cartoonist talked about putting his sex life on paper, legalizing sex work, and his side career as a libertarian candidate.

Mother Jones: Now that Paying For It is out and you’re on tour, have you heard from other johns who have read the book?

Chester Brown: Only one. Last night in Vancouver a guy came up and admitted to me that he was a john. He liked the presentation that I did and appreciated where I seemed to be coming from.

MJ: When you decided to escape from what you call “possessive monogamy,” why did you choose to go to prostitutes rather than, say, going the Craigslist “casual encounters” route or looking for a physical relationship with no strings attached?

CB: The Craigslist route—I don’t have a computer, for one thing. When I started this, we’re talking 1999—it didn’t seem to be as much of a thing then, to pick people up on the internet. And as far as picking people up at bars, I just figured I didn’t have the social skills for it. I don’t know how good at it I’d be at it on the internet, either.

MJ: After you visit your first prostitute, you write, “A burden that I had been carrying since adolescence had disappeared.” What exactly was that burden? Sexual repression? Moral concerns?

CB: Not moral concerns. Just the male desire for sex—like, where am I going to find it next? I didn’t realize how strongly that was on my shoulders until it was gone. 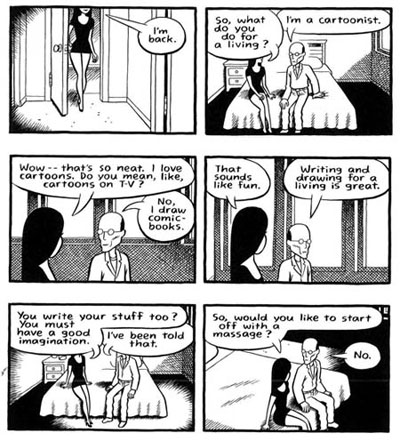 From Paying For It by Chester Brown (Drawn & Quarterly)

MJ: Is it weird drawing yourself having sex over and over again?

CB: It didn’t seem weird. The weird thing about doing those drawings was having to conceal the women’s faces. That limited my ability to draw sex to some degree. But was it weird? Not really. What’s weirder is being on the road doing these presentations where I show a slideshow of the book and project these images in front of an audience.

MJ: Why did you choose to depict the sex instead of fading to black or doing one of any other artistic sleights of hand?

CB: I suppose I could have. There were a couple of instances where what I’m thinking during sex was relevant, so I might as well show myself having sex. I could have gone from a shot of the bed to just showing the ceiling and my thought bubble. Or maybe just show the feet. It just seemed, sex was taking place—why drag the camera someplace else in the room?

MJ: When you are with a prostitute, is there any way you can be sure you’re not having sex with a sex slave, or someone who’s underage or being abused by a pimp?

CB: Well, those are three different things. Underage, you have to rely on your own ability to distinguish age, which isn’t always completely accurate. As I show in the book, there were only two cases in which I was questioning the ages of the prostitutes. All the rest of the time I was confident the girls were of legal age. As far as sex slavery goes, in Canada, if the woman has a Canadian accent, I’m confident that she hasn’t been trafficked and forced to work as a prostitute.

As far as women who are being abused by pimps, I think if you see women who do incalls or outcalls rather than work on the street, they are less likely—from what I’ve heard—to have pimps. But you can’t be sure. And just because a woman has a pimp doesn’t necessarily mean that she’s being abused by the guy. You can’t know for sure.

MJ: In an ideal world, how would you like to see prostitution regulated? What would you do to minimize sex trafficking?

CB: One of the significant reasons why women who are trafficked and forced to work as prostitutes often don’t want to come forward is because they’re worried they’ll be deported. If the police are certain that a woman has been trafficked and forced into prostitution, then perhaps we should automatically allow her citizenship.

MJ: Beyond that, you would like to see prostitution legalized?

CB: I am for decriminalization. The significant aspect of that is that we don’t force prostitutes to have to get a license to work. I think the whole idea of licensing consensual sex between adults is offensive. Inevitably, not all prostitutes are going to get licenses. When Denise [see below] was still a prostitute, I asked her if the profession was legalized and prostitutes were required to get licensee, if she would. And she said no way. She just didn’t trust the government with that information. But that would mean that if something negative happened to her, like if a john beat her up, she would be less likely to go to the police because she’d have to admit she was doing something illegally.

MJ: One argument for licensing is public health—keeping track of STDs and HIV. Does that strike you as a concern?

CB: I think most people are motivated to want to do what is best for themselves. People want to avoid STDs. I believe in a system that leaves it up to the individual to protect their own health.

MJ: You eventually end up in a long-term relationship with one woman, whom you call Denise. You’re her only client, and she’s the only woman you sleep with. You say you don’t think of her as a prostitute, but do you see her as your girlfriend?

CB: [Laughs.] I was talking with Tracy Quan, and she asked if I would consider myself a sugar daddy. That might be the closest we come to, though I usually think of a sugar daddy as someone who’s got a bit more money than I do. I’ve asked Denise how she feels about those terms—sugar daddy and sugar baby—and she didn’t like them any more than she likes being called a prostitute.

MJ: Beyond having a physical relationship, do you hang out?

CB: Yeah, we hang out. I pay for sex but I also spend quite a bit of time with her off the clock, so to speak, where I’m not paying her for the time we spend together. And actually we spend more time off the clock than on the clock.

MJ: So you see it as more than a business relationship?

CB: [Laughs.] I am opposed to nationalized health care. The libertarian movement is, from what I can gather, is much smaller than it is in the states. There isn’t a Ron Paul-type character. Certainly the party itself did very poorly in the last federal election. And I personally did very poorly as a candidate.

MJ: Can I ask how many votes you got?

CB: Four hundred and fifty-four, which is fewer votes than I got in the 2008 election, when I got 490. So I was hoping to beat myself, and I didn’t. I was very depressed on the morning following the election when I read the results. Although I did find out that I got more votes than any other Libertarian Party candidate across Canada.

MJ: Paying For It was sponsored by the Canada Council for the Arts. You don’t have an issue taking a grant from the government?

CB: Mmmm, no. To me, those are two different things. I’m against government giving money to artists, but I’m not against artists taking money. Just like I don’t have a moral problem with people taking healthcare from the government, but I don’t think government should give it. When I’ve had medical problems, I’ve taken the free healthcare that government gives and don’t see it as hypocritical to do so.

MJ: The National Endowment for the Arts probably wouldn’t touch a project like yours with a 10-foot pole. Have you gotten any reaction from the Canada Council for the Arts?

CB: [Laughs.] No so far. I was wondering if there would be some sort of a stir about that. No one’s brought it up yet.