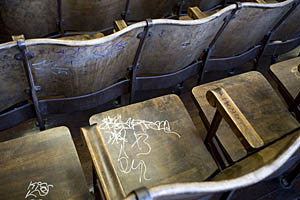 Editors’ Note: This education dispatch is part of an ongoing series reported from Mission High School, where education writer Kristina Rizga is embedded for the year. Click here to see all of MoJo’s recent education coverage, or follow Kristina’s writing on Twitter or with this RSS Feed.

It’s 9:48 am when I sit down in the back of Ms. Bowman’s World History class next to Natalie*, a young student with Gabrielle Union looks. Unlike other girls arranged in clusters of friends, Natalie sits alone. A tiny, pink butterfly pin has landed on her straight black hair. The pink hairpin matches the pink t-shirt peeking out underneath her fitted black leather jacket. She blows up a giant yellow bubble with her gum and pops it, just as Ms. Bowman begins her class.

Ms. Bowman is dressed in a black t-shirt that says “Gay? Fine by me” and warms up the room with a quick review of last week’s material. “What did the US government mandate in the tenements?” she asks. Natalie raises her hand first: “Refrigerators and toilets.” “Excellent!” Bowman responds. “Did the Industrial Revolution make life better for everyone right away?” Bowman asks her 23 teen charges. Natalie jumps in first again: “No, just for the bosses at first.”

A student to my left has pulled out a hairbrush and is tidying the long, black hair of a girl in front of her. “Rina, please put the brush away,” Ms. Bowman intervenes. “But it’s cute though,” Rina says, slowly putting the brush into her backpack. “That’s true, but it’s distracting,” says Ms. Bowman.

“Today your class will feel more like science and art class,” Ms. Bowman continues, and claps her hands. She writes the words Freud, Darwin, Psychology, Psychoanalysis, and Evolution on the white dry erase board.

“Pedro, could you come up to the front please?” she asks, then has him lie down across two desks. Pedro pretends to relax on a Freudian’s couch while Ms. Bowman pretends to read through his file. “Pedro, last time you told me about a dream you’ve been having about a male teacher who is chasing you with a knife,” she says.

“Pedro, last time you told me about a dream you’ve been having about a male teacher who is chasing you with a knife,” she says.

“How does that dream make you feel?” Ms. Bowman asks.

“Angry,” Pedro responds. “Very angry. I want to punch him in the face.”

“Hmmm… ” She pretends to write furiously. “Well, Pedro, what this really is about is you wanting to kill your father and marry your mother,” she says.

“What?!” The class erupts in laughter.

“I know, crazy right?” says Ms. Bowman. “Imagine how that sounded a century ago!” She launches into a discussion about repressed feelings, defense mechanisms, and dreams. “Repeat after me, everyone. Psy-cho-ana-ly-sis,” she says. Natalie repeats the word three times with the rest of the class.

Ms. Bowman moves on to the whiteboard terms Darwin and evolution. “What do Christians say about where human beings come from?” she asks. “Man is made in the image of God, and woman from Adam’s rib,” one student responds.

“From a rib? What kind of a theory is that?” Natalie jumps in. “That’s right!” Bowman says, “And now imagine Darwin shows up and tells everyone we descended from monkeys. It shook their world. He was not invited into polite circles.” “Cuz they are closed-minded,” Natalie adds. Ms. Bowman asks students to summarize their understanding of Freud and Darwin in writing.

After the bell rings, I notice that Natalie stays behind after everyone trickles out of class. “Do you want to get lunch with me?” I ask. “I can’t eat lunch,” she says. “Why?” I ask. “I have an ulcer,” she says, drawing in her notebook.

When she went back to her charter school, everyone was writing about the shooting death of a student. But she didn’t know.

So I sit down next to her and we start talking.

It turns out that Mission is her third school in two years. As Natalie tells it, she’s been “kicked out” of two charter schools in San Francisco, to the great chagrin of her father and stepmother. “They have a lot of headaches already,” she explains, adding that her youngest sister has seizures and her oldest brother needed a bone marrow transplant.

Do you know why you got kicked out?” I ask. Natalie tells me that last year she came back from a vacation with her sisters in North Carolina, where her eczema had flared up from humidity. Her skin was itchy everywhere and she missed a few days of school.

When she came back to school, everyone was writing essays reflecting on the recent shooting death of a student. But Natalie’s teacher failed to explain the assignment to her, she says, and when she started asking questions about the material they’d covered in her absence, her classmates lashed out at her. “They told me that I was a monster, that I didn’t care about this guy. But I never met him and I didn’t know what happened,” she tells me. “I just wanted to make up for what I missed. The girls wrote a nasty letter to the principal complaining about me.” Her eyes well up with tears. “The principal and assistant principal didn’t hear me out. They blamed me,” she says. Her lower lip trembles violently as she tells me she has no friends yet at Mission, that she’s been diagnosed with depression and is taking two medications for it, that she’s seeing a therapist she likes at the Wellness Center once a week, that at least she feels the teachers here are on her side.

“They told me that I was a monster, that didn’t care about this guy. But I never met him and I didn’t know what happened,” she tells me.

“I’m so sorry,” I tell her. Regret kicks into my stomach; I feel terrible for asking her these questions. I want desperately to make her smile.

“What do you want to be when you grow up?” I ask desperately, big grin on my face.

“An astronaut,” Natalie says, tears in her eyes.

“Oh! I have a girlfriend who worked at NASA,” I tell her. “She’s really cool, and super successful in a world dominated by men. And she wears giant heels to work at Apple now.” Natalie’s face lights up, finally. “Do you want to meet her sometime?” She nods in agreement.

Briefly, I feel better. Then I run into Pedro and stop to say hello on my way off campus.

[Next Mission High dispatch: What do you say when a student suddenly pulls up his shirt to show you where gangbangers stabbed him?]