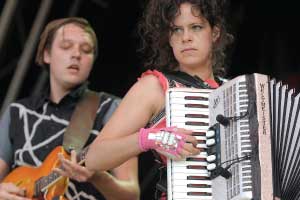 FOR NEARLY A DECADE, Arcade Fire has been hitting rock and roll’s rarest trifecta. The band is critically revered, tops the charts and fills arenas, and still commands the respect of the underground. The surging, anthemic songs on its first two albums, Funeral and Neon Bible, gained Arcade Fire such fans as Bono and Bruce Springsteen, and David Bowie and David Byrne have joined them onstage. When the Montreal-based group’s third disc, The Suburbs, was released in August, it entered the charts at No. 1. Rolling Stone called the album “fantastic,” Pitchfork said it was “powerful” and “life-affirming,” and they sold out Madison Square Garden. Yet they remain signed to superhip independent Merge Records. Fronted by the husband-and-wife team of Win Butler and Régine Chassagne, Arcade Fire has maintained a parallel career as activists for Haiti. Chassagne’s family fled the country during the Duvalier regime in the 1960s—”my mother had nightmares her whole life,” she says. On Arcade Fire’s most recent tour, $1 of every ticket sold was donated to Partners In Health, an NGO that operates a dozen hospitals and clinics in the country; the band made a $1 million match. Chassagne is now helping to launch Kanpe (Creole for “to stand up”), a Montreal NGO that helps PIH and a microcredit organization break the cycle of poverty for Haitian families. “My parents taught me to always remember the poor, and it’s something that I never forgot,” she says, “to appreciate what I have, and to be willing to share.”

Mother Jones: How involved were you in work for Haiti prior to the band’s formation?

Régine Chassagne: Before I met Win, I was a university student working two or three jobs, so I didn’t have the time or money to do anything about Haiti. In the beginning of the band, all my efforts were in trying to make music. After completing our first record, I started realizing that this adventure was going to bring in a decent income, so instantly I started to think about sharing this success with Haiti. In 2004, we played two hometown shows and gave all the profits to Albert Schweitzer’s hospital in Haiti. A couple of months later, I read the book Mountains Beyond Mountains by Tracy Kidder and discovered the work of an incredible organization called Partners In Health, founded by Dr. Paul Farmer. Since then, we’ve been working together in many different ways.

Win Butler: Once I got to know what’s been happening historically, it’s pretty impossible to un-know it. Like right now, there’s the outbreak of cholera in Haiti, and people see that as a news headline, but I know there’s half a billion dollars of aid that one senator is putting a hold on, that the Red Cross has raised half a billion dollars but has only spent $200 million. (See “Promises, Promises.”)

MJ: What do you think is the best relationship between music and activism?

WB: If I was a cabinetmaker or a commercial fisherman, it would be the same question—how to connect to my world. The job we do affords us the opportunity to have people listen to what we say. But a lot of people have a similar situation: They’re trying to find a way to do some good.

RC: Music is made by individuals, so it depends on who you’re talking to. Some artists will be very politically overt in their songs, some will be more subtle. You have to be true to yourself, true to your nature.

MJ: Do you ever think about writing songs that are more directly political? You’ve said that “Rococo” on the new album is related to Haitian history, but that’s nothing a listener would pick up unless they were told.

WB: Songwriting is reliant on inspiration, which ideally you don’t have that much control over. Songs kind of half make themselves, and then you have to finish them. So I’d never say that I wouldn’t write about anything. When I was younger, bands helped me connect to part of my humanity; bands that had nothing to do with anything political helped to form me. There’s a correlation in that: If people can connect to music, maybe they can connect to each other.

MJ: Do you get tired of being held up as the standard-bearers of indie credibility?

WB: Years ago, in order to stay sane, I had to really make an effort not to think about how people view us. There’s just so much noise, positive and negative, and not much good comes out of thinking about it. But really, it’s hard to get too passionate about independent distribution or whatever. In the UK, tons of records are now sold in grocery stores, because there are no record stores—it’s iTunes or the grocery store. And almost every band that had an impact on me was on a major label. There’s value in people actually hearing things, as well.

MJ: What’s the balance between raising money and raising awareness?

RC: We do a bit of both. Since 2007, we’ve been giving one dollar, one euro—whatever the local currency—of every ticket sold to Partners In Health and Kanpe. I think if you have a working band, that’s about the easiest thing you can do—you just set it up and let it work! And then during the shows, Win usually tells people about where the money is going and mentions the information kiosks in the back.

WB: There’s an obligation to let people know where their money is going, so the tour has an educational aspect, mostly as a way to thank people. But the most practical use is to raise money and do the research to figure out the proper ways to spend it. You want to make sure that the money doesn’t just go somewhere where it does more harm than good. Partners In Health sees it as movement-building, because it does get lots of people to do great work. There are, like, genius computer programmers who go down there to build houses. And a lot of times what they see is that they’re better served making a ton of money as a computer programmer and funding people who are good at making houses to make houses.

RC: I have a musician friend who, after reading Mountains, told me, “When I read the book, I wanted to quit music altogether and become a doctor.” I told him, “Do you really think you can be a better doctor than you are a musician? Nobody needs you as a lousy doctor. Just be the one-of-a-kind, brilliant musician you are, and divert your success somehow to benefit the poor.” You can achieve so much more this way. But it’s also important to understand the work that’s being done, and to make sure it’s actually helping. And sometimes, by working on it myself, I get a better grasp of the challenges and complexities of the task, and I’m able to talk about it better. That’s why a balance of actual work and awareness is good, because they feed each other.

MJ: You’ve had a chance to spend time around people like Bono and Bruce Springsteen, musicians who have really put themselves front and center with their political work. What do you take away from your experiences with them?

WB: Bruce and the U2 guys, they’re super-down-to-earth, super-pure about their work. Bono for the last 20 years has done as much political work as music work, and he’s really good at it. I’ll never slag him for that. And I follow the logic of something like the Red campaign. But as much as I respect them and I’m glad their stuff is out there for people to hear, I could never live that way. It would get really alienating, to have my face be the face of a cause. So much just comes down to the songs. I just want to give us the opportunity to write great songs. Even our work in Haiti is limited by how good our songs are. We just need to get rid of as much of the bullshit as possible, so we can have a life, so we have something to write about.