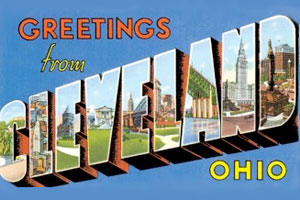 I didn’t know anything about Cleveland when I first went there in the late 1970s. I got off the plane, not expecting much, and went to the office of Dennis Kucinich, then the mayor. Kucinich, in what I now recognize as the Cleveland political style, immediately launched into an attack on the new people-movers that were being installed at the airport. From there he went on to the power company and from there to the banks, and behind the banks, the mob (which later put a hit out on him). That was my introduction to the city of Cleveland—a city steeped in corruption that had nonetheless managed to elect this crusading “boy mayor”—and it won from me a kind of grudging respect that I’ve never lost.

I asked one of his aides if there were any independent journalists there, and he sent me to Roldo Bartimole, who was then—and still is now—the city’s leading muckraker. Meeting Bartimole was a crash course in Cleveland politics. But if I wanted to really know about Cleveland, someone told me, I should read Harvey Pekar. Pekar was a comic book writer, and at that time he was still an underground figure in an underground world, operating in the shadow of R. Crumb, another Cleveland native who had helped him get his start. Pekar worked as a file clerk in a VA hospital, and he lived in and wrote about the old Cleveland neighborhoods that looked like they hadn’t changed in decades—low-key but no-nonsense, a little shabby but comfortable. And he matched his city. As the obituary in the Cleveland Plain-Dealer put it:

Pekar chronicled his life and times in the acclaimed autobiographical comic-book series, “American Splendor,” portraying himself as a rumpled, depressed, obsessive-compulsive “flunky file clerk” engaged in a constant battle with loneliness and anxiety.

After that visit I did read Pekar, and ever since then, any thought of Cleveland for me has conjured up his work. I recalled it one afternoon during the 2004 elections, at a Democratic campaign rally in a Cleveland housing complex. The candidate, whose name I can’t remember, never showed up. I met a middle-aged couple standing off to the side. The man was wearing an AFSCME jacket and the woman a raincoat. It was cold and they were passing a cup of coffee back and forth. The woman’s “Bush Gotta Go” sign hanging limply from the crook of her right arm. They didn’t seem to know much about the candidate, either. I asked why they were there. “Oh,” the woman said in a matter-of-fact voice, “you know, to help out.” There are people like that all over Cleveland. A lot of them are still union people, including some who don’t have union jobs. They’re not flashy and they don’t waste words, but they have a kind of resolve. They don’t really expect much to change, but they come along anyway to help out. They know that most of life consists of just showing up. Nobody pays much attention to them—but in Harvey Pekar’s comics, they were the superheroes.

In the last decade, the world bent over backwards to make Pekar into some sort of star, like when he was on Letterman or when the movie about him came out. But that wasn’t really him. He was like Cleveland’s old neighborhoods, a little run-down but with some kind of resolve that kept him going. According to the Plain Dealer,

R. Crumb said Pekar’s work examined the minutiae of everyday life, material “so staggeringly mundane it verges on the exotic.” Pekar himself summed it up as revealing “a series of day-after-day activities that have more influence on a person than any spectacular or traumatic events. It’s the 99 percent of life that nobody ever writes about.”