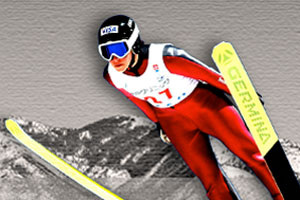 There are two reasons why Alissa Johnson, a 22-year-old Park City, Utah, native, knows she should be in Vancouver today. First, to support her brother Anders, who is ski jumping for the US Olympic team. And second, to strap on her 8-foot-long skis and compete herself. She’s one of the US’s top five female ski jumpers. If there were a women’s team, she’d be on it.

But there isn’t. So, because ski jumping is the last remaining sport of the Olympics that bars women from competing, Johnson is going as a sister and a friend. And that’s it.

The International Olympic Committee (IOC) says the women’s exclusion isn’t discrimination. President Jacques Rogge has insisted that the decision “was made strictly on a technical basis, and absolutely not on gender grounds.” But female would-be Olympic competitors say they don’t understand what that “technical basis” is. Their abilities? They point to American Lindsey Van, who holds the world record for the single longest jump by anyone, male or female. (Ironically, she broke the record flying from a jump built at Whistler for the Vancouver Olympics). Their numbers? When the IOC voted in 2006 not to add women’s ski jumping, 83 competitors from 14 nations jumped at the top level, less universality than required to add a new event. But in the same year, women’s skier cross claimed just 30 skiers from 11 nations. The committee added it. (There are also too few male ski jumpers to qualify, but as one of the original 16 Winter Olympic events, their event isn’t subjected to the same rules.)

Meanwhile, as veteran jumper Jessica Jerome, 23, of Park City points out, without being in the Olympics, it’s tough to develop to the level that the IOC seems to want of her sport. “People don’t understand the seriousness of a World Cup title, or a World Championship medal; they just want to see people at the Olympics. So without the Olympics, you’re not going to get the funding. You’re not going to get the support,” she says. “It’s a catch-22.”

As with so many other sports, the belief that women shouldn’t compete is rooted in ski jumping’s earliest days. And, as with sports like marathon running, that gender bias even took on the gloss of medical opinion. Two years after the first, male-only Winter Olympics in 1924, one German doctor wrote, “Because of the unanswered medical question as to whether ski jumping agrees with the female organism, this would be a very daring experiment and should be strongly advised against.” In an interview with NPR in 2005, Gian Franco Kasper echoed the sentiment. “Don’t forget, it’s like jumping down from, let’s say, about two meters on the ground about a thousand times a year, which seems not to be appropriate for ladies from a medical point of view,” the International Ski Federation (FIS) president said.

On top of outdated anatomical theories, the athletes also face more quotidian problems, from the lack of financing that means they do most of their fundraising themselves to intimations that they don’t work as hard as the men. “On a physical level, we put in just as many hours, on the hill and off,” Johnson says. “But I think on an emotional level, we give up a lot more. Our battle doesn’t just end on the ski jump.”

In fact, it went all the way to the courtroom. Fifteen athletes, including Jerome and Van, sued the Vancouver Organizing Committee (VANOC). They argued that they faced gender discrimination. Their judge this summer agreed, but she ruled that it was up to the IOC, not VANOC, to do something about it. So the only way the IOC will add women’s ski jumping is if it chooses to. Maybe, Rogge has said, that’ll be in 2014—if the ladies are “ready” and their “level of sport” has improved.

Johnson isn’t holding her breath. “I can’t set myself up for that type of disappointment anymore,” she says. And so for a second time, while her brother flies through the air toward his own Olympic hopes, Johnson will remain grounded, unsure even if she should dare to let herself dream of, one day, doing the same.

Correction appended: An earlier version of this story wrongly listed Alissa Johnson as one of the parties who sued the Vancouver Organizing Committee for gender discrimination. We regret the error.