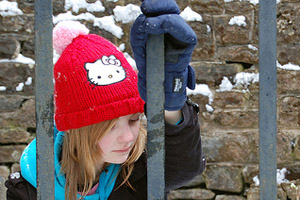 Although I never blurted anything out on national television that led to the arrest of one of my parents, I think I may know how 6-year-old Falcon Heene and his brothers feel as their dad begins a 90-day sentence for his role in the infamous “Balloon Boy” hoax. I am sure they blame themselves, and I know they’re worried about what will happen to them after their father (and then their mother) goes to jail.

My mother was incarcerated more than seven years, so I’ve often written about this topic on my blog. I’ve also been a regular caller into Bob Kincaid’s radio program on the Head-On Radio Network since I was 14 and serve as its teen correspondent. I try to call in whenever something comes up relating to imprisonment, especially when an inmate’s children are in the news. Bob refers to Americans’ preoccupation with incarceration as our national punishment fetish, and it seems that the national media has viewed the Heene story with punishment in mind rather than looking at the story the way I do, from the perspective of a child whose parents have been convicted of a crime.

My dad left town when I was six and I have never seen him again. My mom went to prison when I was 11 and I have only seen her twice. The state of Texas may be glad it got a minor-league drug user and occasional dealer off the streets, but it never gave me or my brother a second thought. Many people think I am a loser because of who my parents are. Yet I love school and I love learning and I have found my own way. But huge numbers of kids with parents in prison or jail never graduate high school and certainly don’t aspire to attend the Ivy League.

The Heenes are lousy parents and idiots, but why are the media so obsessed with the severity of their sentences and not what the future will be like for their kids? The Heene children will have one parent with them while the other serves his or her sentence, followed by supervised probation from the state. But will the children also have supervised parenting? Do they need it? Will there be family counseling?

Many Americans prayed for the safety of the balloon boy during the hoax, but how many of them are now concerned with how the little boy will cope with his father’s three months behind bars? And how many consider the plight of the millions of other American children whose parents are serving time?

There is nearly no news coverage of children with an incarcerated parent, even though this is hardly a unique phenomenon. The impacts on the children of inmates are staggering and well documented. A tenth of all US children—7.3 million total—have a parent in jail or prison or on parole or probation [links to PDF], and most of us are a lot less famous than Falcon Heene. Statistically, we are darker and poorer than other Americans, less likely to complete our education, and far more likely to become incarcerated ourselves. There are a handful of programs designed to help us and our parents and caregivers, but there is very little awareness of the issues that we face. For example, when I started looking for college scholarships for the children of imprisoned parents, it was the first time my guidance counselor had helped a student in my situation.

Occasional references to imprisoned parents are found in human interest stories, but the plight of the millions of children affected by their parents’ incarceration is largely ignored in favor of entertainment stories involving some of the same kids. The media have been obsessed with Levi Johnston’s plans to appear in Playgirl, but there’s been scant mention of him and his young sister being the children of a convicted addict. Even an LA Times story about Levi’s mother getting out of jail to begin her house arrest includes a reference to his centerfold contract, but no reference at all to his minor sister or her care or whereabouts.

Earlier this year I wrote an open letter to Levi Johnston and his sister Mercede about how they could survive their mother’s recent arrest and sentencing. I gave them advice about responding to nosy kids and adults; advised them to attend Alateen, Adult Children of Alcoholics, or a program for the children of addicts; suggested ways in which they could become their mother’s advocate with the prison system; and talked about the need to reform the drug laws. I also expressed the hope that Mercede would be able to live with a full family and not burden her 19-year-old brother with that responsibility.

If the media were to pay attention to the real effects of incarceration on families, perhaps we as a society might take steps to help more children of convicts avoid a life of crime themselves. But first we have to let go of our obsession with treating punishment as entertainment.

Cassie Frequelz is the nom de plume of a high school senior from Central Texas. She blogs at Political Teen Tidbits.