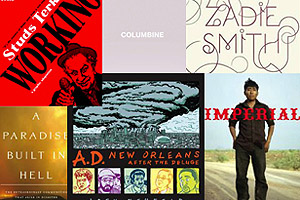 Changing My Mind: Occasional Essays. By Zadie Smith. Smith’s fascinating new book of criticism and observation received an unfairly chilly reception in the States. No New York Times review, no glib New Yorker riff, nada. Never mind the critics—this collection proves that Smith is a literary superstar even when she’s not writing fiction.

Studs Terkel’s Working: A Graphic Adaptation. By Harvey Pekar. American Splendor creator Harvey Pekar proves to be the perfect person to turn Terkel’s 35-year-old homage to the workaday world into something worth rereading. Collaborating with 16 artists, Pekar has edited a selection of Terkel’s first-person tales of drudgery and dignity, as told by baby nurses and grave diggers, prostitutes and stockbrokers. The storytellers’ sense of unease that the bottom could drop out of the American Dream at any moment is all too familiar.

A Paradise Built in Hell: The Extraordinary Communities That Arise in Disaster. By Rebecca Solnit. “Disasters,” writes Solnit, “are, most basically, terrible, tragic, grievous…not to be desired.” Obviously, but don’t stop reading: Nearly every other sentence in A Paradise Built in Hell will challenge what you think you know about catastrophes. Through this people’s history of natural and man-made disasters, Solnit argues that emergencies can bring out the best in us. The extraordinary civility that follows disasters such as September 11 suggests that utopia is possible, if only we recognize how good life can be when all hell breaks loose.

Fordlandia: The Rise and Fall of Henry Ford’s Forgotten Jungle City. By Greg Grandin. In this lively history, Greg Grandin enlists a cast of union-busting thugs, a Norwegian sea captain, and a cranky botanist to tell the story of Henry Ford’s short-lived company town in the Brazilian Amazon. Fordlandia was an ambitious feat of sociological engineering: Indigenous workers lived in cozy cottages straight out of the Midwest and Swiss-style bungalows—part of a utopian vision of profit-driven paternalism unrecognizable in an era of multinationals, slums, and sweatshops.

The Spiders of Allah: Travels of an Unbeliever on the Frontline of Holy War. By James Hider. This romp through the cradle of civilization—think Hunter S. Thompson meets Christopher Hitchens—takes the Middle East bureau chief for the Times of London from suicide bombers’ lairs and hardcore Zionist settlements to a mosque in Mosul, where a 7-foot-tall sheikh insists the British reporter impale himself with a metal skewer. (He’s kidding.) Mixed in with such oddities is a potent point about the dark side of faith and how things can get disturbingly nihilistic at the nexus of extreme and clashing beliefs.

Columbine. By Dave Cullen. Ten years after the massacre, Cullen explores what actually happened leading up to, during, and after the deadly high school shootings. Going beyond the conventional explanation (two outcasts in trench coats lashing out), he reveals that the shooting boiled down to a narcissistic psychopath leading his depressed, suicidal friend to mass murder. Cullen brings a critical eye to an event that still baffles.

Unfriendly Fire: How the Gay Ban Undermines the Military and Weakens America. By Nathaniel Frank. Frank, a senior research fellow at the Palm Center, argues that military policy on homosexuality has increased discharges, hampered recruitment, and damaged military morale and cohesion. Unfriendly Fire offers plenty of new ammunition to be used in the coming battle against Don’t Ask Don’t Tell.

Imperial. By William T. Vollmann. This 1,300-page doorstop from the prolific writer isn’t just about California’s Imperial Valley, but a place called Imperial, which Vollmann describes as “the continuum between Mexico and America.” Driven by Vollman’s tireless, empathetic reportage, Imperial is an extended meditation on immigration, drugs, water, sex, and the folly of trying to tame the desert through border fences or aqueducts. Okay, the size and price are intimidating—but it can still be enjoyed in bite-sized chunks. [Read an excerpt here.]

A.D.: New Orleans After the Deluge. By Josh Neufeld. Among the many Katrina-themed books that have emerged in the four years since the hurricane, this character-driven graphic novel stands out for its personal touch. Neufeld weaves together the stories of a diverse bunch of real-life New Orleanians with powerful images of waterlogged cityscapes. In Crumb-like detail, Neufeld convincingly re-creates his protagonists’ ordeals—and their halting recovery.

A Bomb in Every Issue: How the Short, Unruly Life of Ramparts Magazine Changed America. By Peter Richardson. This absorbing book chronicles the rise and fall of Ramparts, the groundbreaking magazine of the 1960s and early 1970s that launched the careers of many a muckraker, including the founders of Mother Jones. Cameos by Hunter S. Thompson, a pill-popping monkey, Black Panthers, and CIA dirty tricksters add to Richardson’s concise history of the mag’s short, strange trip. [Read an excerpt here.]

From Headrack to Claude. By Howard Cruse. Cruse, a pioneering underground gay cartoonist, received recognition and awards for his 1995 graphic novel Stuck Rubber Baby, which was based on his life in Alabama during the early days of the civil rights movement. His new book collects rare gay-themed work done between the mid-’70s and the present, most of it previously unanthologized and some unpublished.

Impossible Motherhood: Testimony of an Abortion Addict. By Irene Vilar. After she got pregnant at age 16 with a man who told her that “family kills desire, not to mention love,” Villar had her first abortion. Over the next 14 years, she’d have 14 more. This memoir of a woman’s desperate attempt to deal with her dysfunctional life raises a moral question—when abortion is the only means of control a woman has, should she be stopped?

Waste: Uncovering the Global Food Scandal. By Tristram Stuart. In the heroically researched Waste, British historian Tristram Stuart forces us to consider what we don’t eat. Stuart examines “the grotesque scale and gratuitous causes” of food waste, which range from supermarkets’ routine overordering to the tyranny of “sell by” labels. Waste is most delightful when Stuart writes about his adventures in dumpster diving, canning, and teaching others to “prepare squirrels for consumption.”

Brush Cat: On Trees, the Wood Economy, and the Most Dangerous Job in America. By Jack McEnany. Set in the northern woods of New Hampshire, Brush Cat is a sympathetic look at the challenges facing a dying American industry. The book is “mainly about people”: loggers, mill owners, waitresses at breakfast joints, and a host of others who enable us to use wood and paper, well, like they grow on trees. McEnany entertains with his amusing prose and his attempt to follow a logger who agrees to have a “yutz like me with him in the woods.”

Pill Head: The Secret Life of a Painkiller Addict. By Joshua Lyon. Lyon ordered prescription pain medication over the Internet to do some research for a magazine article about addiction. But he soon became the subject of his own story when he got hooked on Vicodin. Pill Head captures his personal struggle with addiction and the insight it gave him into our massive prescription drug addiction problem.

Salvation Army. By Abdellah Taia. An autobiographical coming-of-age novel by a Moroccan expatriate who’s breaking one of his country’s biggest taboos—and committing a crime—by coming out as a gay man. Salvation Army follows Taia from his childhood, through his emotionally complicated adolescence and a troubled relationship with a Swiss sex tourist, to his uneasy exile in Europe. This is Taia’s first book to be translated into English.

Strange Maps: An Atlas of Geographic Curiosities. By Frank Jacobs. It’s hard not to get lost in Strange Maps, a cartographic compendium based on the blog of the same name. Its exhibits range from the hypothetical (a depressing map of the planet after 1,000 years of global warming) to the hyperliteral (“Area Codes in Which Ludacris Claims to Have Hoes,” a geographic transcription of the rapper’s 2001 hit “Area Codes”). Eclectic (and occasionally educational) fun.

Blood and Politics: The History of the White Nationalist Movement From the Margins to the Mainstream. By Leonard Zeskind. Based on decades of research, Blood and Politics considers contemporary Klansmen, neo-Nazis, and militia members and argues that they are in fact a single movement with a common history and disturbing links to mainstream conservatives. Against a backdrop of internal bickering and violent outbursts, it might be hard to tell if white supremacists are frightening, pitiful, or both. However, Zeskind is emphatic that they should not be written off.

Pink Brain, Blue Brain: How Small Differences Grow Into Troublesome Gaps—and What We Can Do About It. By Lise Eliot. In this sharp, information-packed, and wonderfully readable book, Eliot looks at the often misguided, unscientific assumptions that shape children’s gender roles. Take the idea that little boys like toy trucks because they’re hardwired to like motion and that girls are drawn to dolls because they’re intrinsically nurturing: As Eliot, a neuroscientist, points out, “neither trucks nor dolls existed a hundred thousand years ago.”

In Praise of Doubt: How to Have Convictions Without Becoming a Fanatic. By Peter Berger and Anton Zijerveld. The United States was founded upon freedom of thought, but sociologists Berger and Zijerveld argue that our intellectual freedoms have, ironically, spawned the intensified fundamentalist ideals. Americans’ belief in the unquestionable correctness of their beliefs has created a climate in which moderation has been pushed out of the conversation by the far right and the far left. Cultivating the importance of doubt is the only way, they argue, to quell extremism and revive moderation.

The Good Soldiers. By David Finkel. Washington Post national enterprise editor David Finkel embedded with an infantry regiment in one of the roughest areas of Baghdad at the height of George W. Bush’s surge. His gripping account shows what’s really at stake during such high-stakes moves, and how they affect the troops who lay it on the line.